What the HIV/AIDS Pandemic Can Teach Us About COVID-19

The impacts of stigma, fear, and bureaucracy in emerging epidemics 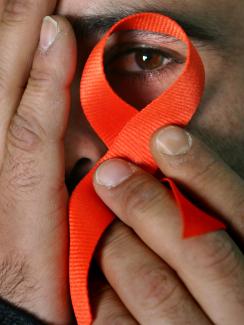 A Jordanian living with HIV covers his face to avoid being identified through a photograph as he fears discrimination in Amman, Jordan, on November 1, 2005. REUTERS/Ali Jarekji
by Magdalene K. Walters May 13, 2020

In 1981, the U.S. Centers for Disease Control and Prevention (CDC) received reports that five individuals in Los Angeles were suffering from an uncommon form of pneumonia. Eventually their illnesses were identified as secondary infections that arose from the Human Immunodeficiency Virus (HIV). That was the beginning of a global pandemic still alive today, having claimed nearly a million lives in 2017 alone according to the Institute of Health Metrics and Evaluation (IHME)-led Global Burden of Disease Study.

Almost forty years later, in late December of 2019, a different respiratory disease emerged and within weeks doctors began to take notice. Doctor Li Wenliang is credited with having initially described an illness similar to Severe Acute Respiratory Syndrome (SARS) in Wuhan, China. Since then, this illness has been identified as COVID-19 and has killed nearly three hundred thousand people worldwide.

An effective countermeasure for many infectious diseases is restricting contact with infected people. However, medically screening for an emerging infectious disease has proven difficult. In the absence of effective detection, it’s easy for both the general public and officials to make broad assumptions about who may carry a disease. These assumptions are often based on social groupings, leading to xenophobic, racist, and, in the case of HIV, homophobic stereotypes. While biologically HIV and SARS-CoV-2—the virus that causes COVID-19—may not exhibit many similarities, both were accompanied by widespread fear, stigma, and misinformation, which hindered public health efforts.

This motivation to treat a public health threat as foreign has also been shown in the U.S.’s response to the COVID-19 pandemic, which has featured a heavy focus on China. Initially, travel was restricted from mainland China by the United States in early February of 2020. This action likely delayed the speed at which COVID-19 spread in the United States. However, it’s estimated that of the cumulative U.S. COVID-19 infections, 60–65 percent of them were seeded by spread from New York. In New York, genetic analysis has shown that the virus was likely imported from Europe, not China. Travel restriction from Europe was implemented a month after that of China. Currently the United States has the highest number of cases in the world. Ignoring the U.S. role in the spread of and burden attributable to COVID-19 has led to difficulty for local officials to advocate for supplies needed to counter the epidemic and for citizens to properly understand the threat at hand. Countries are often reluctant to acknowledge health crises out of fear that it will be seen as weakness by the global community and have negative economic impacts.

What should be done in the face of an unknown epidemic? Broadly, remaining calm and educated can be effective ways to start. Contagious illness is frequently used as a fear-mongering tactic to aid xenophobia, racism, and homophobia. Gay and bisexual men experienced an onslaught of hate crimes as cases of HIV grew in the United States. Similarly fueled hate crimes have recently been launched against Asian Americans in the United States. It is vital for officials to denounce any discrimination and hate crimes resulting from a rising epidemic, both to safeguard marginalized people’s well-being and to ensure that the public is not acting on disinformation and misinformation surrounding the virus.

Fear, misinformation, and stigma prevent an accurate understanding of a disease, and amplify epidemics rather than quell them

Acknowledging the severity of a threat is important, but staying realistic about preventable actions is paramount. Public health emergencies highlight the importance of routine prevention and detection. In the case of the HIV epidemic, routine testing and informing partners so they could begin appropriate preventative measures were critical actions. At this point, the best deterrents of COVID-19 have been government-mandated physical-distancing measures (school closures, nonessential service closures, and shelter-in-place orders), handwashing, testing, and contact tracing.  Fear, misinformation, and stigma prevent an accurate understanding of a disease, and amplify epidemics rather than quell them. The public and government should apply the lessons learned at the outset of the HIV epidemic to better understand the reality of a threatening pandemic and to help mitigate social injustices that those who are infected may face. While epidemics and disease outbreaks are difficult to prevent, they can be controlled, but only with a government’s and public’s timely acknowledgement and the adherence to suggested deterrents.

EDITOR'S NOTE: The author is employed by the University of Washington’s Institute for Health Metrics and Evaluation (IHME). IHME collaborates with the Council on Foreign Relations on Think Global Health. All statements and views expressed in this article are solely those of the individual author and are not necessarily shared by their institution.

Magdalene K. Walters is a third year post-bachelor fellow at the Institute of Health Metrics and Evaluation (IHME) on the HIV global burden of disease team.

Can the U.S. Be Among the First to Eliminate HIV Transmission?

Will the recently launched “Ready, Set, PrEP” program be a meaningful step toward HIV/AIDS elimination in the U.S.?