Go to homepage
Can the U.S. Be Among the First to Eliminate HIV Transmission?
Governance

Can the U.S. Be Among the First to Eliminate HIV Transmission?

Will the recently launched “Ready, Set, PrEP” program be a meaningful step toward HIV/AIDS elimination in the U.S.? 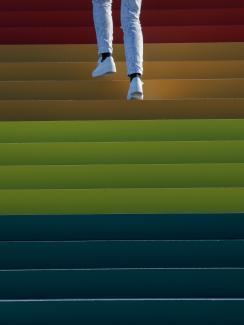 The goal? Push the United States closer to the United Nations’ 90-90-90 targets. The method? Ready, Set, PrEP, a program recently launched by the U.S. Department of Health and Human Services. The audience? Those at risk of being infected with HIV. The potential? Unclear.

Gilead, the maker of Truvada, has pledged donations to cover 200,000 people a year over the next eleven years. How does this compare to the United States’ need? In 2017, the number of new HIV cases was estimated as 51,000 for both sexes, according to the Global Burden of Disease Study led by the Institute for Health Metrics and Evaluation. Gilead’s donation is four-fold greater than the annual number of people who could historically have benefitted from PrEP, suggesting the potential for the program to provide broad protection for many at risk.

New cases of HIV in the United States in 2017

In the United States, those at risk of HIV include members of the LBGTQ+ community and people belonging to disadvantaged groups, such as those experiencing poverty, and intravenous drug users. Recently, many in these communities have been negatively impacted by the dilution of the 2010 Patient Protection and Affordable Care Act (ACA). This is reflected most plainly in the increase of 2 million uninsured people, the first increase in ten years. Protections in place for LGBTQ+ people, women, and people with limited English proficiency are vulnerable amid proposals to roll back these provisions.

Ready, Set, PrEP ideally would bridge these coverage gaps, however, it outlines three qualifications people must have to qualify: testing negative for HIV, having a valid prescription from a healthcare provider, and lacking health insurance that covers outpatient prescription drugs. The rules associated with this program may exclude many who are most at risk. Because of this, the number of people able to access Truvada from Gilead’s donation is likely to be much lower than 200,000 individuals per year.

Those with insurance through the marketplaces established in the Affordable Care Act are eligible for preventative HIV screening without a co-pay. Those without insurance will need to find a clinic that provides free testing through community health centers or organizations like Planned Parenthood that provide affordable, culturally-competent care to many who don’t feel welcome in traditional medical establishments—including many in the LGBTQ+ community. These organizations rely heavily on grant funding established through the Affordable Care Act. When this funding is put in peril, more than a quarter of these clinics find themselves at risk of closing. If an individual is unable to find such a clinic, the associated clinical costs of HIV testing exceed $1,200 annually.

In 2018, between 8 and 29 percent of LGBTQ+ individuals were refused medical care.

Not only may HIV testing be cost prohibitive, those in need of PrEP may face stigma in finding a primary care physician they feel comfortable asking for HIV-related services. In 2018, between 8 and 29 percent of LGBTQ+ individuals were refused medical care, with transgender individuals bearing the brunt of this discrimination. California recently attempted to counter this by allowing individuals to access PrEP without a prescription, however, the lack of prescription renders them ineligible for Ready, Set, PrEP—meaning that cost remains a barrier to access.

The third qualification eliminates many who might have otherwise benefitted from Ready, Set, PrEP. For instance, those with insurance through the marketplaces established in the 2010 Patient Protection and Affordable Care Act are eligible for preventative HIV screening without a co-pay. However, those covered by the Affordable Care Act fail to qualify for Ready, Set, PrEP because their insurance plans provide coverage for outpatient prescriptions. Regardless of coverage, prescription co-pays remain prohibitive for many when balanced with other financial obligations.

These three qualifications eliminate large groups of potential beneficiaries. Each layer of marginalization (poverty, sexuality, and gender identity) creates a new barrier so that a person is increasingly unlikely to benefit from Ready, Set, PrEP. To be fair, some people will benefit from the Ready, Set, PrEP program. However, many will be left out—excluded by the program’s rules. It is worth asking whether the “Ready, Set, PrEP” program is really a meaningful step in HIV prevention.

Magdalene K. Walters is a third year post-bachelor fellow at the Institute of Health Metrics and Evaluation (IHME) on the HIV global burden of disease team.

California’s New Truvada Law: Greater Access, But for Whom?

In lower-income settings, improving access to PrEP drugs may rely on financial accessibility despite other efforts