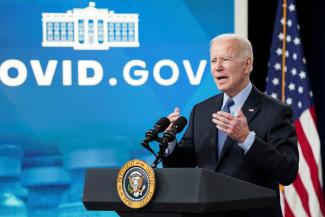 In his contribution to this series on U.S. foreign policy and global health, Kenneth Bernard calls for reformation of how the U.S. government prepares for, protects against, and responds to threats to health security. His arguments touch on a critical challenge that the COVID-19 pandemic creates for policymakers—revitalizing domestic and international institutions that proved inadequate when a deadly pathogenic threat emerged.

In domestic politics and international relations, institutions facilitate setting policy priorities and provide capabilities for achieving the priorities set. COVID-19 has elevated pandemic preparedness and response as a priority for many countries. Pursuing this objective requires domestic and international capabilities in order to conduct global outbreak surveillance, share scientific and medical information, develop countermeasures, and deliver goods and services to contain and defeat dangerous pathogens. Policymakers should pay attention to how institutions are designed and resourced for the needed capabilities to function effectively.

COVID-19 disrupted, damaged, and demonstrated the weaknesses of domestic governmental bodies, intergovernmental organizations, and hybrid public-private entities. The resulting reform agenda is enormous, and it includes organizational reforms needed to address global health problems beyond pandemics. However, disagreements within and among countries about setting priorities in global health and developing the capabilities needed to achieve policy objectives threaten institutional transformation. These threats loom large for U.S. policymakers, who face a body politic polarized by COVID-19 and a world divided by war, coercion, and competition concerning the balance of power and ideology.

U.S. foreign policy has often responded to cataclysmic events with institutional innovation and reformation. After World War II, the United States led the creation of institutions that defined the liberal world order, including the United Nations, the Bretton Woods institutions, and the General Agreement on Tariffs and Trade. Following the 9/11 attacks, the United States retooled its law enforcement, military, and intelligence agencies, and created a department focused on homeland security, to address terrorism. Advocates for institutional changes needed because of COVID-19 draw on this pattern of U.S. behavior after major political disruptions.

However, the U.S. relationship with institutional transformation is complicated. The U.S. government catalyzed the creation of the League of Nations after World War I, but domestic opposition scuppered U.S. participation. U.S. actions in the geopolitical competition with the Soviet Union and in the post-9/11 "war on terrorism" marginalized international organizations. These examples highlight that the United States has long experienced domestic political discontent about international institutions centered on notions of American democracy and sovereignty, and foreign policy dislike of such institutions as a constraint on U.S. power and ideology.

U.S. behavior in global health has exhibited similar complexity. In taking action against pathogenic threats, the United States has proved more willing to create new domestic capabilities—such as the Biomedical Advanced Research and Development Authority (BARDA)—and new institutions, including the Global Fund, President's Emergency Plan for AIDS Relief (PEPFAR), and Global Health Security Agenda, than it has been to strengthen the World Health Organization (WHO) by granting it more independence, authority, and resources. The United States has often opposed or marginalized the WHO and global health strategies when they did not align with U.S. power, interests, and ideology.

An Epidemic of Proposals

As the most disruptive health event in a century, COVID-19 produced ad hoc institutional innovation and launched many proposals for institutional reform. The most prominent institutional creation during the pandemic was the Access to COVID-19 Tools Accelerator (ACT-A), but countries also launched new capabilities in other contexts, such as the COVID-19 vaccine initiative of the Quadrilateral Security Dialogue

In addition to Bernard's ideas for overhauling how the U.S. government manages biothreats, the Centers for Disease Control and Prevention (CDC) has been the target of reform recommendations and actions. Proposals have been made to use PEPFAR to build out pandemic strategies. Members of Congress have introduced bills to improve U.S. health security, including the Prepare for and Respond to Existing Viruses, Emerging New Threats, and Pandemics Act (PREVENT Pandemics Act).

Internationally, the European Union will build a "European Health Union" because of COVID-19. Among other proposals, calls have been made to strengthen the WHO, negotiate a pandemic treaty, revise the International Health Regulations, create a pandemic financing facility, expand global surveillance networks, establish a Global Health Threats Council, and turn the ad hoc ACT-A into a permanent global health capability.

The proliferation of reform proposals should not be taken as evidence that consensus exists on institutional change. U.S. politics related to the COVID-19 pandemic are volatile, which creates challenges for foreign policy. The pandemic became another source of polarization in the United States and produced intimidation and threats of violence against public health officials. Many U.S. state governments passed legislation paring back the authority of local and state public health agencies. Policies concerning masks, restrictions on economic activities, and vaccines became battlegrounds pitting government power against individual liberties rather than measures designed to limit COVID-19's damage to American health and national security.

The removal of funds for global vaccine efforts from a COVID-19 spending bill highlights the lack of bipartisan support for actions demonstrating global solidarity. The threat by several Republican and Democratic legislators to vote against additional domestic COVID-19 funding to force the continued use of a public health law to limit immigration further underscores the difficult politics facing domestic institutional reform in the wake of the pandemic.

Although President Joe Biden has been more internationalist than his predecessor, his administration has—in keeping with past patterns—emphasized bilateral and other initiatives not anchored in the WHO. It has not supported more funding or authority for the WHO. It has used the Group of Seven and Group of Twenty as preferred mechanisms for COVID-19 responses and post-COVID reforms. Its proposal for a pandemic financing facility has not gained sufficient diplomatic momentum. The administration's hard line on China precludes productive cooperation with the Chinese government and its allies on global health. The war in Ukraine has focused the administration on the Russian threat to European security, the balance of power, and democracy and, as a result, has marginalized global health in its foreign policy.

The mid-term U.S. elections in November darken the prospects for major, sustainable domestic and international institutional reforms concerning global health. Most experts predict the Republican Party will take back control of Congress and use that control to thwart the Biden administration before the general election in 2024. Institutional reforms for global health at home and abroad are unlikely to be vote-generating issues for President Biden, members of Congress, or candidates running for state and local offices.

No Bretton Woods or PEPFAR Moment

Domestic and international institutional change will happen because of COVID-19. However, the nature of U.S. and international politics suggests that the change achieved will not grow deep roots. Thomas Wright observed that the COVID-19 pandemic was the "first time since the 1930s that the United States chose not to provide leadership during a global crisis." The pandemic could also be the first time since the period between the two world wars that the United States fails to transform institutions at home and abroad in the wake of a calamity of COVID-19's magnitude.