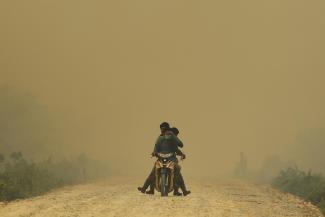 Villagers ride a motorcycle through a haze in Dumai, in Indonesia's Riau province, on June 21, 2013. Hospitals in the province recorded increases in asthma, lung, eye and skin problems. REUTERS/Beawiharta Beawiharta
by David P. Fidler February 2, 2022

The COVID-19 pandemic has, understandably, dominated foreign policy efforts on global health. However, the collateral damage that the pandemic has caused to individuals, health care and public health systems, and social determinants of health underscores that more than pandemic preparedness and response awaits nations after the COVID-19 emergency dissipates.

Noncommunicable diseases (NCDs) constitute an alarming global health problem that the pandemic has overshadowed. NCDs include many threats, such as cardiovascular diseases, cancers, chronic respiratory diseases, and diabetes. According to the World Health Organization (WHO), COVID-19 has disrupted NCD-related health services, aggravating the NCD problem.

Before COVID-19, efforts to raise the political importance of NCDs struggled. Some progress was made, particularly concerning NCDs related to tobacco consumption. But, overall, countries demonstrated little foreign policy interest in NCDs. The impact of the pandemic will make it harder to overcome this disinterest. The imperative to address health threats created by climate change also threatens to marginalize NCDs in foreign policy.

In 2019, the United States spent $61 million on NCD development assistance, less than one percent of its total global health spending

In the mid-1990s, health officials began to argue that NCDs in low- and middle-income countries (LMICs) had become a global crisis that required more attention. In 2014, an independent task force convened by the Council on Foreign Relations concluded that NCDs were "the biggest global health crisis" that LMICs faced; the international response to the crisis had been woefully inadequate, especially in terms of development assistance; and the United States had "no dedicated programs or budget" that addressed NCDs in LMICs.

The task force reached its sobering assessment despite efforts to address NCDs, including the WHO Framework Convention on Tobacco Control, the UN General Assembly's high-level meeting on NCDs, and WHO's development of global NCD strategies. However, the NCD burden in LMICs increased throughout the 2010s. By 2020, foreign aid for NCDs remained a tiny fraction of development assistance for health (DAH). In 2019, the United States spent $61 million on NCD development assistance, less than one percent of its total global health spending. Other high-income countries, such as Germany and the United Kingdom, also provided very little DAH for NCDs. The lion's share of foreign policy attention and DAH remained fixated on infectious diseases.

The lack of foreign policy interest exists because NCDs do not connect well with national interests that drive foreign policy. NCDs are a different problem from the threat that infectious diseases present. As COVID-19 illustrates, the transboundary spread of pathogens poses a common threat and creates mutual dependence—or interdependence—among states in countering the threat.

NCDs in one country do not directly threaten the national security, economic power, or domestic health of other nations

NCDs do not create mutual dependence among states. NCDs in one country do not directly threaten the national security, economic power, or domestic health of other nations. A government can reduce NCDs at home without foreign policy activity and without needing other countries to tackle NCDs. Providing development assistance to help LMICs reduce NCDs does not produce reciprocal benefits that help donor nations address NCDs, infectious diseases, or social determinants of health within their own territories. For LMICs, the need for development assistance reflects dependence on high-income countries not interdependence.

The global NCD crisis highlights that countries are interconnected through, for example, exchange of information on NCDs, trade in tobacco products, and the globalization of unhealthy lifestyles. However, interconnectedness often causes friction over NCDs between the domestic health interests of one state and the foreign policy interests of other states in trade and economic globalization. This friction appeared when governments turned to the World Trade Organization and multilateral companies used bilateral investment treaties to claim that national tobacco-control measures violated economic rights protected under international law.

Interconnectedness does not mean international cooperation on NCDs is impossible. But the absence of a shared threat and the lack of reciprocal interests and benefits makes the foreign policy case for action on NCDs in LMICs harder to make and sustain than for infectious diseases. These differences explain why foreign policy interest in NCDs has been persistently weak and why LMICs have consistently received little development assistance for NCDs.

COVID-19 has set back any hopes that foreign policy disinterest in NCDs might change. The pandemic—which the U.S. National Intelligence Council called "the most significant, singular global disruption since World War II"—has reinforced why foreign policy makers prioritize infectious diseases. COVID-19 prompted increased DAH on infectious diseases, so NCD funding "as a share of foreign aid for health declined in 2020." This decline provides evidence that infectious diseases will continue to dominate foreign policy engagement in global health and absorb most of the financial resources governments allocate in this realm.

Responses to the pandemic have also revealed that geopolitical competition has returned to international relations. Such competition shapes how governments think and act about foreign policy interests, such as security, economic power, and exploiting development assistance for strategic leverage. Amid balance-of-power politics, foreign policy makers are not likely to give NCDs more political attention and financial resources.

The data highlighting that NCDs, such as obesity, increased the risks of severe infection and death from COVID-19 create challenges more suited for domestic responses than foreign policy initiatives. The United States and other high-income countries can reduce national obesity prevalence as a pandemic preparedness measure without foreign policy engagement. Beyond COVID-19, many LMICs will remain dependent on DAH to scale-up national NCD efforts when DAH for NCDs will not increase commensurate with LMIC needs.

COVID-19 has also been a disaster for many democracies. The bungled pandemic responses of democratic governments reinforced concerns associated with a fifteen-year decline in democracy around the world. President Joe Biden has made restoring democracy an imperative for U.S. foreign policy. This project includes demonstrating that democracies can handle transnational threats, such as pandemics. Increasing foreign policy action on NCDs is not a response to the geopolitical, ideological, and transnational threats that democracies face. Further, the global rise of authoritarianism happened without authoritarian governments emphasizing NCDs in their foreign policies. These countries have no foreign policy reason to care more about NCDs.

COVID-19 is generating arguments that improved pandemic preparedness and response (PPR) should include attention to NCDs. For example, the ways in which NCDs contributed to COVID-19 illness and death inform arguments that PPR strategies should support efforts to reduce NCDs. Similarly, claims have been made that strengthened pandemic defenses should integrate universal health coverage because, in part, such coverage is important for reducing NCDs. Another approach identified NCDs as a potential topic for U.S. and Chinese experts to address in helping improve U.S.-China relations on global health.

These attempts to advance the NCD agenda by connecting it to the dominant foreign policy concern with pandemics are understandable. However, the prospects for such pandemic bootstrapping are not good. The PPR reform agenda is already overcrowded. The competition for political support and financial resources among proposed reforms will be ferocious. NCDs will not fare well in the ruthless foreign policy triage concerning global health that the pandemic will force. Using NCDs to foster détente between China and the United States means that improving NCDs in these countries or LMICs is not the strategic purpose behind this idea.

An Even More Inhospitable Climate

The pandemic is not the only reason the marginalization of NCDs in foreign policy will get worse. The adverse effects of climate change became undeniable while COVID-19 battered the world. Recognizing the climate adaptation challenge, the Biden administration announced the President's Emergency Plan for Adaptation and Resilience (PREPARE) to provide $3 billion annually "to reduce climate impacts on those most vulnerable to climate change worldwide." The United States has never proposed anything like PREPARE for the global NCD problem.

The need for climate change adaptation will affect foreign policy calculations in ways that push NCDs farther down the priority list. Climate change adaptation policies must address acute health threats from infectious diseases, extreme heat, disruption of health systems, degradation of food and water supplies, and humanitarian emergencies caused by droughts, flooding, politically instability, and the movement of internally displaced populations and climate refugees. In such an avalanche of acute adaptation threats, foreign policy makers are unlikely to prioritize NCDs.