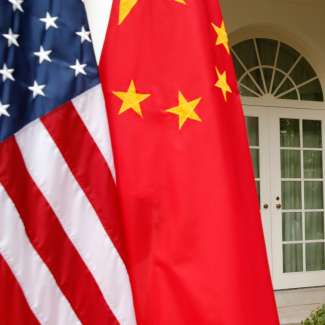 U.S. and Chinese flags stand at attention outside the White House in Washington, DC on September 25, 2015. REUTERS/Kevin Lamarque
by Thomas Wright June 23, 2021

There is never a good time for a pandemic, but COVID-19 hit at perhaps the worst moment. Nationalist governments held power in some of the world’s most politically important countries. Geopolitical rivalries had intensified, and international cooperation had broken down. The pandemic was the first global crisis since the 1930s without any international leadership from the major powers. The resulting disaster encouraged speculation about the pandemic’s long-term impact on the international order. But a more fundamental question has been overlooked: What does the global response to COVID-19 tell us about the world we live in now?

Answering this question requires understanding that the intensification of the U.S.-China rivalry and the onset of a bifurcated international order constitute the overarching foreign-policy story of the pandemic. These developments help explain how, in different ways, the Chinese and U.S. governments manifestly failed in their international responsibilities and why other countries were unable to pick up the mantle of leadership.

The United States has, of course, undergone a change in government and returned to multilateralism, but Washington will still find it difficult to cooperate with Beijing in preparing for future pandemics.

The pandemic shattered the notion that China would develop into a leader in global health. After the epidemic of Severe Acute Respiratory Syndrome (SARS) in 2002–03, China enacted reforms to ensure more effective and transparent responses to similar outbreaks. But when COVID-19 hit, these reforms did not drive Chinese actions. Even if local authorities acted slowly in December 2019, after January 7, 2020, when President Xi Jinping secretly assumed control of the response, it was Chinese policy not to cooperate fully with the international community. Even the much-heralded sharing of the genetic sequence of the coronavirus occurred because Chinese scientists defied a government order prohibiting it. Throughout 2020 and 2021, China has proved a difficult partner for the World Health Organization (WHO) and withheld vital information and data from it. Unlike with SARS, the Chinese government has shown no willingness to admit it made mistakes in how it interacted with the international community. Thus, other countries have no reason to believe that China will agree to or abide by significant reforms that would require greater transparency and sharing of data in the future.

The pandemic also was the first time since the 1930s that the United States chose not to provide leadership during a global crisis. Contrary to popular perception, key members of the Donald J. Trump administration recognized the dangers of COVID-19 earlier than other governments, outside of Taiwan. However, the administration displayed little interest in organizing and leading a global effort to address the crisis, except for criticizing and trying to contain China. The annual G7 summit never took place in 2020, even virtually. Then-Secretary of State Mike Pompeo blew up a G7 ministerial meeting by insisting that the members label COVID-19 the “China virus.” President Trump began the process of withdrawing the United States from the WHO without proposing an alternative mechanism for cooperation.

The absence of global leadership by, and the hostility between, the world’s two most powerful states left a vacuum that others were unable to fill. Only the European Union (EU) had the means and the intent to provide leadership, but health policy is not an EU core competency, which left the EU lacking the capacity to act effectively. European leaders were even slower than their U.S. counterparts to realize the seriousness of the threat, even as COVID-19 ravaged Italy.

Throughout March and much of April 2020, it was every country for itself as EU governments competed over access to medical supplies, sometimes even seizing supplies destined for other members. The Europeans eventually began to cooperate, agreeing to constitutional reforms and increased assistance for the WHO-sponsored Access to COVID-19 Tools (ACT) Accelerator, including the COVID-19 Vaccines Global Access (COVAX) initiative. But the EU never came close to leading a global response.

"COVID-19 was a galvanizing geopolitical event for the United States"

What Worked, and What Did Not?

In the absence of leadership, government officials again and again described the international cooperation that did happen during 2020 as “correlation without coordination.” In other words, governments sometimes acted in ways that were mutually beneficial even without consulting each other. The clearest example is the response of central banks to a looming financial crisis. Individually and without much coordination, the central banks of the G7 economies, including the U.S. Federal Reserve, increased their assets by $7 trillion in just eight months to keep the global economy afloat. This amount was more than double the increase the G7 central banks coordinated in response to the global financial crisis of 2008–09.

However, there was hardly any cooperation on vaccine development or distribution, no coordination on travel restrictions or the distribution of medical supplies, and limited cooperation on achieving a cessation of hostilities in conflict zones. The economic disruption caused by COVID-19 pummeled low-income nations, which were left to fend for themselves. Particularly hard hit were countries, such as Bangladesh, that had done well over the last two decades in escaping extreme poverty and propelling themselves into the lower tier of middle-income economies. The Bill and Melinda Gates Foundation found that the pandemic had reversed 25 years of progress against extreme poverty in 25 weeks. According a 2020 UN report, the pandemic could force 490 million people into poverty—defined as the loss of access to clean water, adequate food, or shelter. In the absence of dramatic action, the United Nations also warned that the global poverty rate could reach 7 percent by 2030, compared to the pre-pandemic projection of 3 percent.

"The United States must engage the WHO, pushing for necessary institutional reforms, and where possible, work with China"

In terms of international order, the most important consequence of COVID-19 has been the pandemic’s acceleration of the U.S.–China rivalry. How the acceleration of geopolitics happens is important. For example, in 1947, Soviet moves against Greece and Turkey and the U.S. counter-response, which included the Marshall Plan, marked the beginning of the Cold War. The U.S.-Soviet rivalry had more fundamental structural causes, but the proximate cause also mattered. The pandemic’s impact on geopolitics is not, and does not need to be, the start of a Cold War, but the intensification of strategic competition between the major powers is consequential even if it takes a different form.

After it suppressed the virus at home, China became more assertive in its foreign policy. Beijing cracked down on Hong Kong, retaliated against Australia for seeking an international investigation into the origins of COVID-19, engaged in a deadly border spat with India, and unleashed aggressive “wolf warrior” diplomacy around the world. For China, the pandemic confirmed its power and capabilities, revealed the inexorable decline of the West, and created more latitude to do as it wished.

Likewise, COVID-19 was a galvanizing geopolitical event for the United States. After signing the phase one trade agreement with China on January 15, 2020, the Trump administration was poised between two camps—those who wanted to contain China and those who wanted to see whether engagement produced changes in Chinese behavior. President Trump spoke in hawkish terms on trade, but he rejected the advice of the containment faction in concluding the trade agreement. In mid-March, after the president agreed to a national lockdown in the United States, he flipped, giving the China hawks a carte blanche. His administration put in place more containment measures over the following ten months than they implemented in the three previous years combined, including restrictions on Chinese technology firms, sanctions on Chinese officials, loosening diplomatic regulations on engaging Taiwan, recognizing repression in Xinjiang as a genocide, and other actions.

Even with a different administration in the United States, competition with China is likely to continue. It may well be different from the competition that occurred in 2020, with a greater U.S. emphasis on values and multilateralism, but cooperation with Beijing will still be difficult. There is no reason to believe that the Chinese government has drawn the lesson that it needs to be more transparent and cooperative with the international community. The challenge for the United States is to prepare for pandemics and other global health challenges as its rivalry with China continues.

Toward that end, the United States must engage the WHO, pushing for necessary institutional reforms, and, where possible, work with China. However, we must be cognizant that WHO activities and reform efforts may fall victim to divisions among the major powers, and the U.S.-China rivalry might limit what bilateral cooperation can achieve. Thus, the United States should also lead a coalition of like-minded governments willing to commit to greater transparency and a coordinated response in future outbreaks. For example, when the WHO declares an international public health emergency, this coalition could implement common responses on, among other things, travel and trade restrictions, public messaging, financial commitments, and sanctions. It will not be easy to build and sustain such a coalition, but the experience of the COVID-19 pandemic strongly suggests that it may be indispensable in the era of great power rivalry.

Thomas Wright is Director of the Center on the United States and Europe and a Senior Fellow in the Project on International Order and Strategy at the Brookings Institution. He is co-author with Colin Kahl of the forthcoming book, Aftershocks: Pandemic Politics and the End of the Old International Order (St. Martin’s Press, 2021).