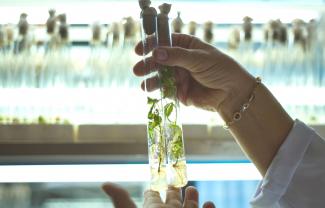 Ukraine and its scientific community have been under attack from Russian forces for over eight years. On February 24, 2022, the Russian Army began a new offensive on Ukraine and the Ukrainian people. This belligerence has not spared civilian structures or civilians themselves. In the past week, the topic of Ukrainian biological labs has been at the center of a conversation which largely serves to bolster a deliberate fabrication on the part of the Russian government.

Ukraine and other former Soviet republics have a long history of fruitful biological research. Early in my research career, I was fortunate enough to collaborate with a Slovakian biochemist. Through that collaboration, we identified a mechanism for stabilizing very small circular pieces of DNA that allowed for them to be visualized for the first time. My experiences are not unique, the Soviet diaspora has made significant contributions to the body of biological science. I grieve for the Ukrainian people and feel for their scientists, who first had to cope with this Russian aggression in 2014. Following Russia's invasion of Crimea, research institutions in the occupied region were transferred to Russian control. Many scientists had to flee, leaving their life's work and livelihood behind. Eighteen universities relocated out of the Luhansk and Donetsk regions. If the rest of Ukraine falls, it is likely that the work of many more scientists will experience major disruptions or be altogether lost.

Fighting in the eastern Ukrainian regions of Luhansk and Donetsk has led to 18 universities relocating, with many scientists losing their labs

Recently, significant attention has been given to Ukrainian biological research and public health laboratories. This is because Russia accused the United States of supporting a Ukrainian biological weapons program at the UN on Friday March 11, 2022. There are no bioweapons in Ukraine. According to a senior defense official with the U.S. Department of Defense Critical Technology Reinvestment Program (DoD CTRP), "We have invested approximately $200 million in Ukraine since 2005, supporting 46 Ukrainian labs, health facilities, and diagnostic sites. DoD's CTRP began its biological work with Ukraine to eliminate the remnants of the Soviet Union's illegal biological weapons program left in the Soviet successor states after the USSR fell. There are no DoD bioweapon labs in Ukraine or anywhere else in the world."

Supporting this statement from a DoD official, UN spokesperson Stephanie Dujarric recently stated that the World Health Organization is "unaware of any activity on the part of the Ukrainian government which is inconsistent with its international treaty obligations, including on chemical or biological weapons."

Despite the fact that no reputable international source has evidence of bioweapons within Ukraine, this topic continues to enjoy the focus of international media. In large part, this is because the Russian government has pushed disinformation suggesting that Ukraine, in violation of Article I of the Biological Weapons Convention (BWC), has active bioweapon programs and that the United States has supported those efforts. China has echoed these claims and they have been picked up and amplified, in part or wholly by political actors within the United States.

Russia has long engaged in a campaign claiming the existence of a United States-Ukraine bioweapons program. In 2012, Russia's head of consumer protection falsely accused the former Soviet republic Georgia of an intentional release of African swine fever in Southern Russia saying there were signs it had been "artificially injected." In October of 2014, the Russian Ministry of Defense accused the United States of "running a clandestine biological weapons lab in the country of Georgia." Although these claims are not based on any validated evidence, they are a frequent tool of the Russian government. The accusations concerning both the Georgian and Ukrainian labs are an attempt to explain or rationalize Russian belligerence.

In "Biosecurity in Putin's Russia," Zilinskas and Mauger detail a decade-long Russian disinformation campaign through which they have attempted to vilify U.S. international biological research partnerships. Specific claims against former Soviet republics and the United States include the deliberate release of both Zika and Ebola. Notably, the accusation concerning a deliberate release of Ebola was made in English on Russian Today (RT), a Russian state-controlled international television network.

The United States has indeed made significant investments toward the modernization, biosafety, and biosecurity of Ukrainian labs. It is unclear what motives Russia has for accusing the United States-Ukraine partnership of breeching their obligations under Article I of the BWC program. It could be that the Russian Army intends to use this as a justification for their delivery of biological or chemical weapons, or perhaps they will claim an accidental release of a biological weapon to both vilify the United States and cover for their delivery of such a weapon. Or this could just be a cassus belli to justify their attacks upon Ukraine and Georgia.

In various departments of state reports, the United States has expressed concerns that the Russian Federation may not be living up to its obligations under Article II of the BWC. These concerns likely form the basis for the Biden administration press secretary Jen Psaki's recent assertions that Russia has the "capacity" to use weapons like these and that "Russia is the country that has a chemical and biological weapons program."

If Russia attempts a "false flag" bioweapons operation, a Russian borne threat will be distinguishable from a Ukrainian lab leak

Prior to its dissolution in 1991, the USSR operated a robust bioweapons program. Knowledge of the details of that program—which lasted at least until 1991 through the Biopreparat's Ferment and Ekology programs—have been extensively researched and published. In 1992, President Boris Yeltsin confirmed that the Soviet Union had conducted a bioweapons program, violating Article I of the BWC program convention. After the collapse of the USSR, Ukraine and other former Soviet states were the home of disaggregated biological labs that were once a part of the USSR’s bioweapons program. The United States has assisted Ukraine in its efforts to decommission and secure weapons of mass destruction, including bioweapon labs via the Nunn-Lugar Cooperative Threat Reduction program. Efforts have continued under the U.S. DoD Biological Cooperative Threat Reduction Program for over 15 years with the aim of enhancing appropriate biosecurity and biosafety, and enhancing international collaboration.

The U.S. DoD Biological Threat Reduction Program began its partnership with Ukraine in 2005 to increase its biosecurity, biosafety, and biosurveillance capabilities. In 2011, as a part of an international workshop on biosecurity, an accounting of Ukrainian high-containment labs was provided by Ukrainian scientists. At that time, Ukrainian labs did not use standard international pathogen categorization and therefore laboratory classification also differed from the accepted international categorization scheme. This difference was a remnant of the USSR categorical system that persists in Russia today. Although this does not necessarily mean there was an immediate hazard, it did indicate a need to invest in biosecurity and biosafety across Ukrainian biological labs. Specifically, to provide the investment needed to bring Ukrainian biological labs in line with international biosecurity and biosafety practices.

This United States-Ukraine partnership, under the defense threat reduction program, has reduced the danger the world now faces as Russia attacks Ukraine. In part, it did so by removing the remnants of bioweapons programs that were illegally carried out by the USSR, but this ongoing relationship has also enhanced biosafety and biosecurity procedures. A less captivating part of this modernization includes record keeping regarding the storage of pathogens. One result is that Ukraine’s Ministry of Health knows exactly what is in each of those labs. If the Russians attempt a "false flag" bioweapons operation, a Russian borne threat will be distinguishable from a Ukrainian lab leak. This after-the-fact benefit is of little comfort given the aggressive nature with which Russian forces have attacked civilian population centers.

There are biological research and public health labs within Ukraine that operate at the BSL-3 and BSL-4 level. This means there are organisms stored there that could be hazardous to the public upon accidental or intentional release. Many similar laboratories exist in western European countries and the United States. These must not be confused with bioweapon facilities and their existence serves a legitimate scientific purpose and supports the control of infectious diseases including Ebola, Marburg virus, and SARS. Good biosafety and biosecurity practices are put in place to limit the unintentional and intentional release of pathogenic organisms from biological laboratories.

Biological labs are necessary assets for public-health and biosecurity related to the agricultural industry. The COVID-19 pandemic has underscored the need for increased epidemiological surveillance which is provided by public health labs across the globe. Russia's disinformation campaign against a functional cooperative agreement which enhances biosecurity, biosafety, and international collaboration poses a threat to both the biosecurity and biosafety of Ukrainian labs.

The Russian disinformation concerning Ukrainian bioweapon programs is just that—disinformation. Labs within Ukraine and many other nations do store highly contagious and harmful pathogens for the purposes of research. A weaponized biological organism requires mass production and a delivery mechanism. That will not be found in Ukraine. However, an accidental or intentional release of a contagious agent could still be harmful to the local population. This danger is similar, although not in scale, to the risk associated with the Russian attacks on and takeover of the Chernobyl site and Zaporizhia nuclear plant. Ukrainian biological labs that served a peaceful purpose may unintentionally, or perhaps even intentionally, be utilized as a mechanism of war by the Russian Army.

What Should Be Done Now

On March 11, 2022, the WHO rightfully directed Ukrainian labs to destroy high-threat pathogens across its biological labs. Considering the aggressive and destructive nature of the Russian invasion of Ukraine so far, this is a logical and reasonable step to take if it has not already been completed since an accidental or intentional release of a contagious agent could still be harmful to the local population and Russian ground forces. This is not because these labs house weapons of war, it is because Russian forces may intentionally or otherwise turn critical peacetime infrastructure into a biological hazard.

Russia would like to dissuade future cooperative agreements such as the ones that have increased the biosafety and biosecurity at Ukrainian biological labs. We must push for the opposite. Organized and functional biosecurity and biosafety implementation is a mechanism of securing the world against pugilistic states.

It is regrettable that some media outlets have suggested that the United States efforts in Ukraine were nefarious. These accusations are baseless and serve to further the Russian disinformation campaign, which supports the illegal and immoral invasion of the sovereign democratic nation of Ukraine.

Dr. Vindman is writing in her personal capacity and views expressed here are her own and are not the views of the U.S. government

Cindy Sue Groff Vindman, Ph.D., is a geneticist by training, and earned her doctorate from the University of Georgia, Athens. Dr. Vindman is a captain (CPT) in the U.S. Army Reserves Command and serves as the biomedical portfolio lead for the 75th Innovation Command.