Go to homepage
Why Aren't Russians Getting Vaccinated?
Governance 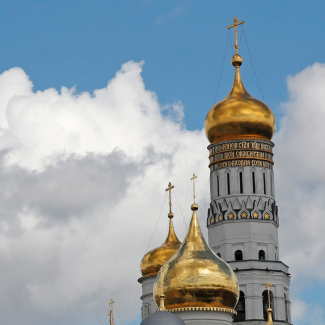 Cathedral Square, or Sobornaya Square, the central square of the Moscow Kremlin as seen on Victory Day, May 7, 2021 in Moscow, Russia. REUTERS/Shamil Zhumatov
by Judy Twigg and Lillian Posner July 26, 2021

Russia's vaccine history is complex—a mélange of innovation, medical myths, pontificating politicians, even cartoons—which might explain why its current vaccine situation is complicated as well. Russia has developed four different COVID-19 vaccines, one of which—its flagship Sputnik V—has been approved by national regulatory authorities in 69 countries around the world. Although Sputnik V is still under review by the World Health Organization and the European Medicines Agency, its likely safety and efficacy have been heralded in leading international scientific publications. It's been widely available in Russia for months. Yet Russia's vaccination rates fall far below those in any other country other country where vaccines aren't a scarce commodity. Low vaccination uptake and the emergence of the Delta variant have driven Russia's daily caseload and number of reported COVID-19 deaths up by 2.5 times over the last month, putting its current mortality rate at one of the highest in the world.

Some hurdles standing between Russians and COVID shots include fear of side effects, mistrust of government, and conspiracy theories

Why aren't Russians protecting themselves? Opinion polls point to the same menu of hurdles present in many other societies: fear of side effects, mistrust of government, a misguided definition of privacy and personal autonomy, outright COVID denialism, and a wide range of conspiracy theories about the pandemic. There's one contributor to vaccine refusal, however, that appears to be disproportionately prominent in Russia: pseudo-scientific anti-vaccine messaging propagated by credentialed medical professionals.

Russia's level of vaccine hesitancy is especially paradoxical given the country's long and distinguished history of vaccine development and promotion. Catherine the Great was the first Russian recipient of a smallpox inoculation in 1768. Two centuries later, Soviet vaccines and initiative played a central role in the eventual eradication of smallpox. Dr. Albert Sabin conducted the first large-scale clinical trials of the oral polio vaccine in collaboration with Soviet scientists in the late 1950s; Moscow's Chumakov Institute eventually exported that vaccine to more than 60 other countries. At home, a large-scale Soviet vaccination campaign in the mid-1960s centered around a beloved and persuasive cartoon, "The Hippo Who Was Afraid of Vaccinations," featuring a hippo who turns white with fear at the sight of the vaccine needle, then yellow from illness, then a blushing red with embarrassment about having resisted the shot in the first place. Spurred by strong science and the persuasive—and sometimes coercive—power of the state, coverage of routine childhood vaccines was high in the Soviet Union during the 1960s and 1970s.

Current Russian anti-vaccine sentiment sprang initially from a single publication, analogous to the Western anti-vaccine movement's roots in the now-discredited 1998 Andrew Wakefield piece in the Lancet that falsely linked the MMR vaccine with autism. In Russia, it was a commentary published a decade earlier, in September of 1988, titled "Well, You Think It's Only a Prick?" Placed in the Moscow-based newspaper Komsomol'skaya Pravda, with a daily circulation around that time of about 22 million, the article cited the dangers of a "conveyer belt" of "dirty" mass vaccinations developed by a "criminal" array of complicit pharmacologists and immunologists. Its arguments were quickly picked up by other publications and eventually spread through Russian Orthodox churches and segments of the medical profession. Vaccination rates plummeted after the article appeared and have never fully recovered, despite periodic campaigns in all of the post-Soviet countries. Russia has experienced episodic outbreaks of vaccine-preventable diseases ever since, including diphtheria in the early 1990s and measles in 2018.

The anti-vaccine furor of the late 1980s found fertile ground in a society with deep historical roots in alternative medicine. Traditional healers, mystics, and other purveyors of folk medicine continue to attract significant attention in Russian print, broadcast, and social media, and official statistics indicate that Russia has more alternative practitioners than regularly licensed doctors. Many traditional practices have long been considered legitimate by the Russian medical mainstream, and it's common for Russian patients to consult their regular physician when they have a medical issue, but then seek a second opinion from an alternative provider.

Several of the most media-savvy purveyors of alternative medicine have gained additional notoriety as anti-vaccine crusaders during the current pandemic by blending their standard pseudo-science with hefty doses of Russian nationalism and rejection of established authority. One of the most prominent of these is Dr. Galina Chervonskaya, who's been at this for so long that she was quoted in the 1988 Komsomol'skaya Pravda article. Chervonskaya's recent five-hour medical seminars on YouTube claim that a single vaccine cannot be appropriate for everyone, that a scientifically adequate COVID-19 vaccine could not plausibly have been developed in under a year, and that successive generations of Russians have been weakened by decades of vaccines.

The beating heart of anti-vaccine conspiracies in Russia, though, is the Independent Association of Doctors. The association's website explains that the coronavirus pandemic is a hoax designed by global elites and injected into the media deliberately to spread hysteria, cover up a worldwide campaign to embed people with microchips, and ultimately commit mass murder. The association has amassed a following of over 30,000 Instagram followers and 25,000 Telegram subscribers, many of whom flood chat rooms with anecdotes of people they know who fell ill or died after getting COVID-19 vaccines.

Earlier this month, the association's Dr. Mikhail Svatovsky claimed that Russia's excess mortality of the last eighteen months can be attributed not to coronavirus, but instead to fear and hysteria spread by the Kremlin as a ruse to control people. He and his fellow anti-vaccine activists promote the idea that a person's spiritual and psychological fortitude have as much to do with their ability to fight disease as their immune system, and that a brave person will survive infection, whereas a weak-willed or frightened person will die. By blending scientific jargon with patriotic and anti-government rhetoric, the association elevates the coronavirus pandemic to the level of an existential fight for humanity that resonates with Russians who are overwhelmed by the chaos and uncertainty of ever-changing COVID-19 restrictions and a rapidly rising death toll.

Reputable national surveys taken in February and May 2021 showed that over 60 percent of Russians would reject Sputnik V. It's a positive sign, however, that long queues suddenly appeared at vaccination clinics in mid-June, after the mayor of Moscow—hoping to reverse the rising tide of infections and avoid politically unpalatable restrictions on social and economic activity—mandated that 60 percent of all workers in public-facing jobs get the shots. Moscow is now vaccinating about 100,000 people per day, and most of Russia's regions  appear to be following the capital's lead. Yet even under the new requirements, currently only about 24 percent of the population has received at least one dose of a COVID-19 vaccine, and just under 16 percent are fully protected with two.

It will likely take more than offers of free ice cream or a chance to win a new apartment, or even desperate government mandates, to persuade many Russians off the fence. For this audience, bad science may be best countered with good science, but that isn't what the Russian government has delivered so far. Instead, the Putin regime has served up premature and exaggerated claims about its vaccines' safety and effectiveness, politicizing its COVID-19 response in a way that has damaged public trust even further. Reaching this audience will require carefully tailored communications, drawing from the country's rich scientific legacy and displacing fake medicine and messengers with the real thing.