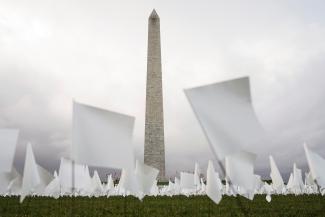 White flags placed across 20 acres of the National Mall represent Americans who have died of COVID-19. The Washington Monument stands in the distance, in Washington, D.C., September 2021. REUTERS/Joshua Roberts
by Kenneth Bernard April 4, 2022

History demonstrates that infectious biothreats can damage political stability and security. Bubonic plague virtually destroyed Europe in the fourteenth-century. Smallpox and measles nearly extinguished native American populations in the sixteenth century. Typhus and dysentery spread through French armies and ensured Napoleon’s 1812 defeat in Russia. The 1918-19 influenza pandemic killed more people than all the battles fought during World War I.

In this century, the anthrax letters mailed to politicians and journalists in 2001 dramatically demonstrated national vulnerabilities to terrorist use of biological agents. The spread of biotechnology and the democratization of the ability to create and genetically modify organisms—for good or for bad—continues to increase the national security dangers of biothreats.

Now, U.S. deaths from COVID-19 have reached nearly one million—more than all fatalities suffered by American armed forces in all the wars of the twentieth century. The pandemic has cost the U.S. economy over $4 trillion in just two years—more than twice the cost of twenty years of U.S. military operations in Afghanistan.

But historically, such statistical comparisons have not swayed minds in Washington, D.C. After the 9/11 terrorist attacks, I spoke to the U.S. Joint Chiefs of Staff at the Pentagon on the national security importance of biothreats. I noted that more people died of smallpox in the twentieth century than in all the wars of that century combined. One of the service chiefs responded, "It looks like the military did a pretty good job, but you doctors didn’t do so well."

Since that Pentagon briefing, the U.S. defense and national security community has tolerated the framing of some health issues as national security threats, but only reluctantly and temporarily. "We understand that pandemic preparedness and biodefense is important," goes a common U.S. Department of Defense (DoD) refrain, "but they aren’t really our mission."

The Ebola epidemic in West Africa devastated Liberia, Sierra Leone, and Guinea. It killed more than 11,000 people and disrupted economies at an estimated cost of $4.3 billion. Each of these countries suffered a decline in agricultural production and trade because other nations restricted cross-border movements of people, goods, and services. Private-sector investments dramatically decreased. The outbreak spread to another seven countries.

In an after-action interview, the DoD’s senior Ebola coordinator reported to me how the DoD supported the humanitarian purposes of the Ebola control efforts in West Africa. He closed by saying that the DoD could now, thankfully, get back to its primary mission of supporting military forces, deterring war, and ensuring U.S. national security. He then smiled and sighed with relief.

Traditionally, public health experts and national security professionals made uncomfortable bedfellows. These communities prefer to deal with their own self-defined issues. Health experts are wary of national security activities, which many in health view as marginalizing the humanitarian goals of health and ignoring individual rights. Security experts dislike diverting time and defense resources to support "soft" policy goals, such as health.

This tradition of mutual neglect began to change in the U.S. government in the late 1990s. President Bill Clinton’s concern about biothreats encouraged national security policymakers to frame certain health issues as security threats. President Clinton’s National Security Advisor, Sandy Berger, helped define those threats, arguing that an event that "kills huge numbers, crosses borders, and threatens to destabilize whole regions is the very definition of a national security threat. To dismiss it as a ‘soft’ issue is to be blind to hard realities."

In this context, then-Secretary of Health and Human Services (HHS) Donna Shalala posted me to the National Security Council (NSC)—the first health policy expert assigned to the council. While I was at the NSC, the Clinton administration declared HIV/AIDS a threat to national security—the first time a disease had been so designated.

Thus began an era where health leaders with national security experience were periodically assigned to the NSC—first to deal with bioterrorism and eventually adding pandemic diseases. Fluent in the languages of both national security and health, these experts—rather than public health professionals—embodied what the Obama administration's Secretary of Defense Ash Carter called the new ways of thinking and acting to respond to a more diverse and complex national security environment. These cross-over experts gained positions of authority in government, academia, and the private sector. In ensuing years, more individuals with health expertise pursued biosecurity as a career path.

Unfortunately, the COVID-19 pandemic overwhelmed what the U.S. government had developed for pandemic preparedness and health security, and it created the urgent need to rethink how the government organizes itself for biosecurity threats. The dysfunctional U.S. pandemic response was—and continues to be—mired in longstanding political, structural, governance, and communication problems.

First and foremost is the problem of the leadership and command structure for managing national health security emergencies. Health security is not alone in facing this challenge. Over many years, the defense community has been revising its leadership and command structure in its traditional areas of responsibility. Its successes can inform the health security community. Last year, I argued that the Goldwater-Nichols Department of Defense Reorganization Act of 1986 provides a model for redesigning U.S. command, control, and operational structures and capabilities to deal with the next pandemic and other biothreats.

Why start with the leadership and command structure? Nathan Myhrvold, former Chief Technical Officer for Microsoft, once said, "A basic principle of management accountability is to ask ... [w]ho is the most senior person in the organization whose full-time job is dedicated to function x? ...When one or more senior, full-time people are not dedicated to managing a problem, it almost invariably means that the issue is not important—or that the organization is in trouble."

Ask your doctor, your friends, or the stranger at the next table in Starbucks who is the senior U.S. government person in charge of preparedness and response for pandemics and other biothreats. Some might guess the Secretary of HHS. Others might identify Dr. Anthony Fauci from the National Institutes of Health (NIH). And a few might ask, "Doesn’t CDC do that?" Such disparate answers suggest that no one seems to know, and for good reason. That senior government position—the U.S. health security czar—does not exist.

For over a year, Jeff Zients managed the U.S. COVID-19 response as the White House COVID Response Coordinator in the Biden administration. He recently resigned and will be replaced by Dr. Ashish Jha. For other international biothreats, the Special Assistant to the President for Global Health Security and Biodefense at the NSC is responsible (do you know who that is?). Responsibility for domestic disease preparedness and response is divided among the director of the Centers for Disease Control and Prevention (CDC), the Secretary of HHS, and the director of the NIH’s National Institute of Allergy and Infectious Diseases. As seen during COVID-19, the U.S. government’s health security enterprise is ineffective, reflecting a complicated and fragmented leadership and command structure.

The COVID-19 pandemic overwhelmed what the U.S. government had developed for pandemic preparedness and health security

Congress passed the Goldwater-Nichols Act to respond to fiascos in command, control, operational planning, and communications and rivalries among the military services during the Vietnam War, the failed military operation in 1980 to rescue U.S. hostages in Iran, the invasion of Grenada in 1983, and the attack on the Marine barracks in Lebanon in 1983. The mandated reorganization proved effective, as demonstrated during the Gulf War in 1991 and subsequent military engagements.

The health security enterprise has similar organizational and leadership problems involving dozens of government departments and bodies—much like the many services, commands, and agencies within the DoD. The Goldwater-Nichols reorganization strategy that worked for DoD could be adapted to bring a logical command, communication, and operational structure to the U.S. pandemic and biothreat preparedness and response enterprise.

This transformational reorganization should supplement not replace routine public health activities to improve individual and community health normally undertaken by the CDC and by state and local health departments. A clear organizational structure permanently anchored in the White House could develop operational plans and response capabilities that would equip the U.S. government to handle the next biothreat or pandemic that threatens our national security.

It appears that Congress and the administration of President Joe Biden are starting to follow this approach.

Experts, headed by Ezekiel Emanuel, recently provided the administration with recommendations on "Getting to and Sustaining the Next Normal: A Roadmap for Living with COVID."  The roadmap urges the U.S. government to create the post of "Deputy Assistant to the President for Biosecurity (within the National Security Council), responsible for preparing for, monitoring, addressing, and coordinating responses to and communications about any [domestic and international] biosecurity and pandemic threats."

In Congress, a Senate bill, the Prepare for and Respond to Existing Viruses, Emerging New Threats, and Pandemics Act (PREVENT Pandemics Act), has been voted out of committee. It proposes the establishment of an Office of Pandemic Preparedness and Response Policy (OPPRP) within the Executive Office of the President. The OPPRP would be led by a director, appointed by the president, to advise on pandemic preparedness and response policy, support coordination, and communicate on preparedness and response issues.

These proposals are important first steps in beginning to transform how the United States prevents, prepares for, and responds to biosecurity threats. In countering such threats, the government needs a "combatant commander" to provide clear leadership and an authorized and trusted voice. However, as the DoD learned through the Goldwater-Nichols reforms, establishing high-level posts is necessary, but not sufficient. Institutional and attitudinal changes down the command-and-control structure are also important for producing sustainable, effective, and adequately resourced reform.

COVID-19 will not be the last pandemic the United States will face. After COVID-19 fades, it is critical to keep an experienced, full-time combatant commander for biosecurity at the White House to lead and prepare to battle our next biothreat, whether it results from natural or accidental spread or even intentional use.