The Centers for Disease Control and Prevention Needs to Be Reformed 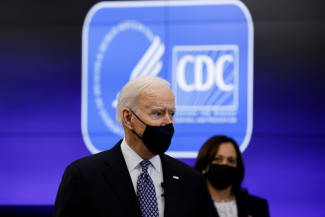 When disaster looms, the Federal Reserve (Fed), the central bank of the United States, can move quickly to help the economy, no matter how politically unpopular their actions may be. The Federal Bureau of Investigation (FBI), the U.S. domestic intelligence agency, can act independently to save lives and protect the country. The Fed is guided by the economy and the FBI by the law.

During a U.S. public health emergency, we all count on the Centers for Disease Control and Prevention (CDC) to safeguard our health. The CDC must be guided by science. However, this is not how the CDC has functioned throughout the COVID-19 pandemic—it has made costly mistakes under two administrations. Were those mistakes rooted in politics, institutional culture, organization, recruitment—or all of these?

The CDC has made costly mistakes under two administrations

Under the Trump administration, the CDC was sidelined early in the pandemic response when some of its senior scientists were vocal about the danger that COVID-19 posed to the country. With the Biden administration, so far, the agency has furthered the president's agenda instead of prioritizing the protection Americans' health. Last year, Biden pledged to celebrate "a summer of freedom" through vaccination by July 4, Independence Day, but the Delta variant threatened to derail his plans. Guided by this aspiration, both the CDC and the National Institutes of Health (NIH) sold vaccines to Americans as their tickets back to normal life. But warning signs were everywhere that vaccines would not be sufficient. The original clinical trials were not designed to measure the effect of vaccines on blocking transmission—assuming protection against symptomatic disease translated into protection against infection was a costly error. As early as May, British researchers found that the Pfizer vaccine's effectiveness in preventing breakthrough infections was dropping against the delta variant. Instead of closely monitoring breakthrough infections in vaccinated individuals to determine if efficacy was decreasing, the CDC chose inaction, constrained testing, and doubled down on vaccines as the sole solution to end the pandemic.

By blinding itself to breakthrough infections and favoring American data, the CDC let politics outweigh science. Only in late July did indisputable findings from the United States compel the CDC to update its testing recommendations: nearly three-quarters of people infected with SARS-CoV-2 in an outbreak in Massachusetts had been vaccinated. Another mistake occurred last spring when the CDC advised vaccinated Americans to drop their masks, even though many countries were still using masks, and plenty of data supported their effectiveness in preventing infections. As a result, the percentage of Americans wearing masks in public plummeted, and the practice has not returned to previous highs. If mask use had remained steady, the CDC likely could have prevented thousands of deaths.

The mistakes continued with omicron. The CDC did not prepare the country for a surge in demand for testing and vaccination. Many Americans had to wait weeks to receive a booster vaccine. Additionally, the definition of fully vaccinated remains two shots (the exception is one shot for Johnson & Johnson-made vaccines), while all scientific data show that three doses are needed. As it became clear that omicron was dramatically more transmissible with widespread infection of the vaccinated, the CDC has been slow to respond to the new reality. To strengthen the CDC, multiple steps are needed.

Take Politics Out of the Equation

We need to make the CDC independent from the government in order for it to protect Americans' health. Instead of doing this, the White House proposed exactly the opposite: it created a Washington, DC-based "mission control" office at the Department of Health and Human Services to oversee pandemic response. This office would be subject to even greater political pressure. To ensure independence, the CDC should follow the model of the NIH, which largely only accepts unrestricted dollars from Congress, helping it prioritize science over politics. In contrast, the CDC's funding is directed by politicians, which imposes many constraints. Also, the CDC should be given some freedom to reallocate funds during an emergency and allow it to request additional research funding from Congress, as NIH does.

Another important step is narrowing the CDC's scope of work to make it more effective. Its sole focus should be to prepare for and respond to pandemics. History has shown that the CDC performs best when it focuses on threats from infectious diseases; it eradicated smallpox, banished polio from the Americas, and dramatically reduced the burden of other infectious diseases in the United States and around the world.

Make Data Public as Soon as it Is Collected

The CDC should release all the data that it collects and make it available to scientists. By making its data available with appropriate measures to protect privacy, the United States can maximize its return on investment of taxpayers' money. Sharing data encourages scientific debate and facilitates rigorous analyses. The CDC should not hide behind privacy claims, nor attempt to control the narrative about a fast-evolving disease. Immediate public release should be legally required.

It is important for the public to hear from subject matter experts at the CDC—they should not be constrained by a single narrative. It is time to abolish the internal review system at the CDC, known as the "clearance process," to foster a vibrant scientific culture. However, the CDC could keep its review process on policy recommendations, as some junior scientists may lack expertise in this area.

When communicating guidelines to the U.S. public and state health departments and government leaders, it is crucial for the agency to provide the evidence behind these recommendations. When the CDC fails to provide data to support its claims, it looks like it is pulling recommendations out of thin air.

Limit the Incentive for CDC Staff to Delay Policy Updates

In some emergencies, the CDC must take steps to protect the public even before the science is clear. But to date, CDC leadership often waits until research is published to update their policies. Waiting to change policies until data are published can harm public health by prioritizing caution and certainty over risk-taking in the name of protecting people. For example, following the large COVID-19 outbreak among fully vaccinated individuals in Massachusetts in 2021, the CDC director waited weeks to update the agency's recommendation on mask wearing until staff’s analysis of the outbreak could be published.

Learn from Other Countries' Successes and Failures vs. Being U.S.-Centric

Throughout this pandemic, the CDC has not followed the science of its peers. Instead, it has focused only on the data that it collects itself, or data collected through its programs. The CDC has repeatedly ignored danger signs coming from data collected by outside scientists, such as warnings from India in April 2021 about the potential for the Delta variant to evade immunity and overwhelm health systems. The CDC should use all available global data sources to inform its actions, such as SARS-CoV-2 genomic surveillance data submitted by credible researchers from around the globe.

To improve the CDC's ability to respond during emergencies, the agency should bring in experts from around the world to work with its scientists. This will improve scientific outputs and help with mentoring CDC scientists. Eventually, after the CDC is reformed, the agency needs additional resources to pay competitive salaries to attract top scientists.

America needs a strong CDC at the helm of disease prevention and health promotion more urgently than ever. Today's CDC, impeded by politics and ill-structured for a strong, science-driven response to crises, has had one hand tied behind its back while trying to address the biggest public health emergency in a century. Pandemics will grow more frequent. There is no time to lose in strengthening the CDC and rebuilding trust. Reconfiguring the CDC so that it is science-based, agile, and independent will protect the United States and the world.

Ali H. Mokdad is Chief Strategy Officer for Population Health at the University of Washington and a Professor of Health Metrics Sciences at the Institute for Health Metrics and Evaluation (IHME).


Dr. Christopher Murray is institute director of the Institute for Health Metrics and Evaluation (IHME), University of Washington.