Global Health's Moment of Truth in the United States

Twenty years ago, Congress created a global health bill that changed the world and this week, they could do it again 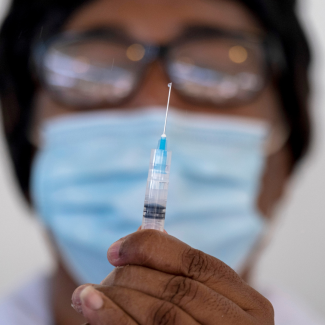 A health worker prepares a syringe with a dose of Moderna's COVID-19 vaccine at Saint Damien Hospital in Port-au-Prince, Haiti, on July 19, 2021. REUTERS/Ricardo Arduengo
by Emily Bass March 7, 2022

In March 2003, as the United States plunged into in an epoch-defining war, the U.S. Congress found time for decisive, transformative lawmaking that led to America's largest and most successful pandemic-fighting investment in history—the Presiden's Emergency Plan for AIDS Relief, or PEPFAR. Over the next few days, as Congress responds to the supplemental budget requests from the White House issued last Wednesday, it will have the opportunity to shape the future of public health for good.

The parallels are, of course, imprecise. In 2003, the United States instigated the war and subsequent humanitarian crises in Iraq; now, Biden seeks $10 billion for humanitarian, security, and economic assistance, while Russia wages a war of aggression. In 2003, when Congress legislated an unprecedented $15 billion for addressing AIDS in Africa, it was acting on President George W. Bush's call for a "work of mercy." Tackling AIDS meant showing compassion. Taking on COVID-19 at home and abroad is in America's own self-interest.

In 2003, when the United States tackled AIDS globally, it showed compassion

Nevertheless, the best possible outcome from Congressional deliberations—expected to conclude over the next three to four days—over the supplemental budget request would be action of the sort taken nearly two decades ago. At that time, Bush asked for and Congress authorized and appropriated $15 billion, making PEPFAR the largest disease-specific foreign aid program in American and world history.

The Biden Administration's request of $5 billion is less than a third of the estimated $17 billion needed for a comprehensive global response. Lawmakers can and should appropriate money commensurate with the global crisis. But increasing the funding level is only part of the solution. Congress has an opportunity to provide legislative direction for the shape and strategy of the investment. In 2003, the legislation specified the percentage of funds that had to be spent on lifesaving antiretroviral medications for HIV and stipulated the program's target of treating two million people in five years. The program met and exceeded that target in its first five years and continued to do so for nearly fifteen years thereafter, and maintained robust bipartisan Congressional support by reporting on its progress and maintaining the focus on treatment to save lives.

Now, Congress should specify that U.S. government funding for global COVID should include an ambitious, evidence-based percentage for scaling up testing and treatment for COVID-19 in every country that it proposes to support with vaccination programs. Omicron has made it clear that COVID-19 vaccines do not prevent virus transmission. A comprehensive, effective strategy must include tests, treatments, and vaccination. The availability of treatments will incentivize people to test. When people test, they can take the steps that save their lives, protect their families and communities. These steps in turn can help slow the spread of the virus, and can help mitigate against new variants.

While President Biden celebrated America's acquisition of millions of doses of the effective COVID-19 medication Paxlovid (nirmatrelvir/ritonavir) in his recent State of the Union, the U.S. government has been much slower to embrace a test-and-treat component of its global effort. The nascent Global VAX program that is surging support in eleven countries doesn't yet include treatment and testing, even though the White House named treatment targets at its 2021 Global COVID-19 Summit. Congress can ensure that U.S. funding follows the current science.

In 2003, Congress also legislated the structure for the fight to defeat AIDS, stipulating that the whole-of-government effort be housed in the U.S. State Department and helmed by a presidentially appointed ambassador. This unique placement and leadership allowed the program to move quickly, marshaled the best of the various U.S. agencies working overseas, and worked with U.S. ambassadors who collaborated with heads of state in other nations.

The nascent Global VAX program that is surging support in eleven countries  doesn’t yet include treatment and testing,

In this appropriation bill addressing the supplemental budget request, Congress should ensure that at least $1 billion of the global COVID-19 funds go directly to PEPFAR. The structure that it enacted years ago has stood the test of time. Across the countries it works in, PEPFAR programs are embedded in communities, working with government and local NGOs and engaging with people most directly impacted by pandemics. It would be impossible to build a stronger base for swift, effective intervention. Its swift, effective deployment of $250 million for COVID-19 related work shows what is possible and should be expanded in the interests of efficiency, impact and safeguarding American lives. PEPFAR isn’t in all countries facing COVID-19, and it is not perfect by any means. But where it is operating, it is a testament to what is possible when presidential leadership is matched with bipartisan vision and a willingness to act. As Congress races to draft the appropriation bill—and the world marks the second anniversary of the global pandemic—the decisions it makes in the coming days could determine how many more COVID anniversaries we endure in a pandemic that is still raging.

Emily Bass’s book, To End a Plague: America’s Fight to Defeat AIDS in Africa, is a finalist for the 2022 Lionel Gelber Prize.