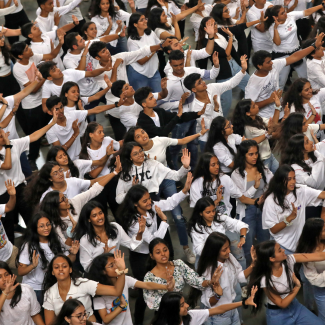 College students perform during a flash mob as a tribute to the cultural diversity of India, at Mumbai Central railway station, in Mumbai, India, on September 22, 2022. REUTERS/Niharika Kulkarni
by Mary Brophy Marcus October 27, 2022

India was one of the countries hit hardest by COVID-19. It suffered massive case and death counts, and serious supply shortages—including oxygen, ventilators, and personal protective equipment. Think Global Health asked global health expert Ramanan Laxminarayan, president of One Health Trust, and senior research scholar at Princeton University, to share a bird’s eye view of health right now in India, three years into the pandemic—what the country has lost and learned and where its strengths and resilience lie.

Think Global Health: We're almost three years into the COVID-19 pandemic. How is India doing from a health perspective?

Ramanan Laxminarayan: Life expectancy dropped two years in India during COVID. Mortality was about 4.5 million people, according to the World Health Organization—the range is anywhere from about four to six million people died during COVID in India. Certainly it showed up in the sheer inadequacy of the health system, of being able to take on a health challenge like this.

Think Global Health: What has worked well in India's health system during the pandemic?

Ramanan Laxminarayan: More people are vaccinated [against COVID] in India—both in absolute numbers and as a proportion of the overall population—than in the United States, which is impressive given that India is a much poorer country.

For the most part, immunity has been acquired either through infection or through vaccination. So, unless there is a truly new variant which is able to avoid immunity, India seems to have exited COVID to some extent. COVID is no longer prominent in the media, it's not at the top of peoples' minds, and nearly all COVID restrictions are gone.

Think Global Health: What would you say are the longer-term effects of the pandemic?

Ramanan Laxminarayan: The loss of life expectancy due to COVID will likely recover over the next few years. But there are long term effects that may not go away soon.  Our research found that immunization programs were affected by COVID and this has an effect on long term wages and livelihoods for these children. All vaccination dropped, but I would put polio and measles at the top of that list.  Apart from this, there is the problem of long COVID to consider in a population with high rates of non-communicable diseases.  I don’t think we have quite understood the scale of this problem.

Think Global Health: We've been reading about India's plans to build an "oxygen grid" and that it is one of the learnings the health system has taken away from the COVID experience?

Ramanan Laxminarayan: During COVID, lack of oxygen was an important reason for the large number of lives lost. Since then, a lot of oxygen resources have come into the country, including 2,000 PSA [pressure swing absorption] plants that are located in hospitals. And there’s a lot of equipment now in the country now, but one of the things we're working on is to connect these into an oxygen grid, which works much like an electricity grid. We just put out a blueprint for a national medical oxygen grid last week.  Our hope is that this will become a long-term solution.

The lack of oxygen is a problem even during non-COVID periods. There are 110,000 children who die every year in India from birth asphyxia—not having oxygen at the time of birth. And there are another 120,000 kids dying a year because of severe pneumonia. These deaths happened regardless of COVID. All of them could be helped with medical oxygen.

I see the damage done by COVID as an opportunity. If there’s a flip side to it...if we can learn from what happened and we can solve these problems for the long term, there will be some redemption from the damage that was caused.

Think Global Health: What are some of the other top health concerns for India right now?

Ramanan Laxminarayan: India has the same health issues as middle-income countries do. It has a large burden of cardiovascular disease, diabetes, hypertension, and cancers. These were obviously affected by COVID. The thing to watch out for now is the effects of long COVID making these conditions worse, especially cardiovascular disease.

On the infectious disease front, my main concerns are around antibiotic resistance and tuberculosis. The national TB program has taken a hit because of COVID. The number of cases being detected has come down. On antibiotic resistance—huge amounts of antibiotics were used during COVID times, mostly inappropriately, and resistance rates jumped up 10 percent, according to a government report published last month.

In India, during COVID, resistance to antibiotics jumped 10 percent

Ramanan Laxminarayan: Use of telehealth has gone up significantly. Not all of it will continue, but some will definitely stay. The second is the use of decentralized diagnostics—this will likely also continue.

In general, there is much more receptiveness to digital health because during COVID, doctors were forced to practice medicine from their homes so they are more comfortable now using apps rather than doing it the way it was always done before. The technology may have been there earlier, but the level of adoption has increased.

Think Global Health: Is climate change and pollution getting attention from the government?

Ramanan Laxminarayan: Climate and pollution are a question of political will. Air quality is a major health challenge in India and it just hasn’t received the attention to stop the clock—moving away from crop burning or enforcing emission rules. I don't think it's a spending issue.

Ramanan Laxminarayan: India has a longer-term problem with health that goes well beyond COVID. Many of the social determinants of health, whether the status of women, the level of nutrition or environmental quality are not favorable to improvements in population health. On top of this, the government spends way too little on health. The lack of investment is likely to be a long-term challenge for the economy and if this is not addressed immediately, it will affect growth prospects over the coming decades.