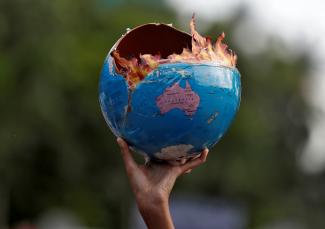 A protestor participating in a "Fridays for Future" march calling for urgent measures to combat climate change holds a globe designed to look like it is on fire, in Mumbai, India, in September 2019. REUTERS/Francis Mascarenhas
by Vinayak Mishra October 26, 2022

When record-breaking heat scorches large swaths of the globe, we see wildfires rage, floods and storms destroy communities, and—on a microscopic level—infectious agents compensate for these external changes in their environments. Bacteria, viruses, parasites, and disease-carrying vectors (primarily insects) have what scientists call climate-sensitive biology and they have a primitive ability to compensate for environmental changes. These changes in turn, can affect human health.

In countries like India where resources are limited in many communities, and the health effects of climate change are significant, building resilience to climate-linked diseases is increasingly important.

Transmission cycles of vector-borne diseases often involve complex interactions between the infectious agents (parasites), their transmitting vectors (mosquitoes), and the target host (humans). These interactions are vulnerable to changes in temperature, humidity, and precipitation. One remarkable example is the rise in cholera outbreaks when ocean surface temperatures increase. Cholera, a water-borne illness that can cause severe diarrhea and leads to millions of cases and as many as 143,000 deaths a year, is transmitted by a bacteria called Vibrio cholerae. These bacteria survive in marine conditions by attaching to zooplanktons, small crustaceans whose primary food source is marine algae. The marine algae population rises when ocean surface temperature increases, consequently increasing the Vibrio cholerae residing on zooplankton.

Climate change can alter and reduce animal habitats. Around three-fourths of emerging human infectious diseases are caused by germs that spread between animal and humans—influenza pandemics and the SARS-CoV-2 pandemic have animal roots. It's not surprising that ecological variations, such as wildfires and floods, influence wildlife habitats and that their related pathogens could impact human health.

Lyme disease prevalence in the northeast United States is a notable example. Humans contract Lyme disease when a bacteria called Borrelia burgdorferi is transmitted through tick bites. The ticks get this bacteria when they bite certain reservoir host animals, such as white-footed mice. With the loss of a biodiverse habitat, the population density of the white-footed mice—these reservoir hosts—increases, which in turn increases the probability of ticks coming into contact with them. This leads to a higher probability that ticks will carry this bacteria and transmit it to humans.

Climate change is now an inevitable and potentially irreversible global phenomenon, and the world needs to increase its readiness and capability to adapt to climate change and mitigate its grave effects on human health and safety. Adaptation efforts could range from individual behaviors, like switching to electric cars or veganism—which can help reduce greenhouse gases—to international levels by creating policies that build climate risk and early warning systems.

Climate change adaptation—making adjustments to the way people live and work in order to address the effects of climate change—as it relates to infectious disease burden, aims to explore options and opportunities that facilitate the management of this burden. Scientists and relevant stakeholders worldwide are assessing the current public health interventions that will be necessary to adapt to climate change, and many are planning methods to help attenuate the health risks due to climate change.

The vulnerability of a specific population or public health system to climate change is determined by the extent of climate change impact, the sensitivity of the system, and the adaptive capacities of the system. For instance, the poorest communities in Mumbai, India—where people who have no or limited access to health care, food, and safe housing—are more vulnerable to a climate change-related rise in mosquito-borne diseases than those living in affluent sections of the city. Vulnerability of a population could be assessed by building simulation models to predict the extent of climate change impact and by collecting data on the population's characteristics.

Adaptation assessments are crucial for climate-related policymaking; the Paris Agreement has committed to monitor and document the development of global climate adaptation measures. The recent recognition of the health risks of climate change has bolstered adaptation responses all across the globe. These responses, according to a 2021 report in Nature Climate Change, are primarily behavioral (75 percent), followed by infrastructural (63 percent), and institutional (42 percent) measures. For instance, in response to water pollution due to the exacerbation of heavy rain events and flooding, people can boil their water before drinking (a behavioral change). The government can install water treatment facilities to control water-borne infectious diseases (infrastructural and institutional). An article in The Atlantic that examined the impact that climate change is having on Mumbai noted that instead of addressing the climate event, the "systemic things that aggravate the climate event" should be contended with.

Early warning systems based on surveillance programs represent a robust public health measure, which has helped identify and control numerous disease outbreaks worldwide. Incorporating climate variables can help these systems predict disease outbreaks more accurately and identify possible links between ecological factors and disease growth. Such measures would require active collaboration between public health entities and institutes focused on climate and environmental hazards. For instance, the early warning system for tick-borne encephalitis in the Czech Republic involved collaboration among climatologists, meteorologists, and epidemiologists. They delineated the effects of climate change on the incidence of tick-borne encephalitis.

Climate Adaptation: Is is Working?

The COVID-19 pandemic has brought the crucial role of public health in preventing and controlling infectious disease outbreaks into the limelight. A recent survey in seventeen developed countries demonstrated that the public is concerned about the impact of climate change on their daily lives, and the majority are willing to adopt lifestyle and workplace changes to attenuate global warming. They also expressed uncertainties regarding whether their efforts would have a significant effect and they desired more evidence on this subject. Adaptation assessments can reduce these uncertainties and help us understand the effectiveness of our actions on limiting "climate hazards."

Vinayak Mishra is a general practice registrar (a physician) at Blackpool Teaching Hospitals NHS Trust in the United Kingdom, and a member of the Cochrane Climate-Health Working Group.