Go to homepage
From Zero to 50,000: The Making of a Community Health Program in Rural India
Poverty 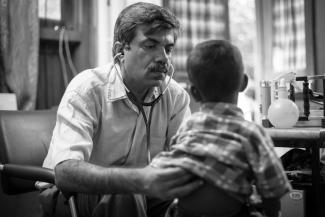 Physician Yogesh Jain examines a young boy with sickle cell disease for pneumonia, in a remote village clinic in India that does not have x-ray facilities, in May 2017. Photo by Vivek Muthuramalingam
by Ted Alcorn July 12, 2021

In 1999, after more than a decade training in India's top medical institution and having attained the role of pediatric oncologist in the country's capital city, Yogesh Jain made a startling decision: to give it all up.

Motivated by a vision for a more equitable health-care system, he and a group of friends relocated to the state of Chhattisgarh in rural central India and developed a community health program, Jan Swasthya Sahyog (JSS), that would serve the poorest people in the country, and arguably, the world.

More than twenty years later, JSS provides care to about 50,000 people annually, and its clinicians conduct observational research on the illnesses of marginalized people and advocate for them in state and national politics.

Dr. Jain recently ended his formal role at JSS to focus on another not-for-profit organization he helped establish, Sangwari, and to advise the state government on COVD-19 measures. In mid-June, as India's second, devastating COVID wave was ebbing, he spoke with Think Global Health.

Think Global Health: After 20-plus years, what sorts of meaningful observations has JSS made about the state of health in rural India?

Yogesh Jain: Heart diseases are supposed to be the most common cause of death in the world. But we showed through our own work that the majority of heart diseases that the poor people suffer from are not coronary disease. In the rural areas, the most common disease is valvular heart disease, and when those valves get bad, you require valve surgeries, but in India there's little support for that.

We also see a lot of diabetes, and the diabetes that we see among the poor in India is not associated with obesity as it is in the United States, where 89 percent of people with diabetes are obese or overweight. We see a different form of diabetes in the poorest people that we work with, which I call "lean" diabetes. Thirty-five percent are even undernourished, yet have high sugars. We published in the British Medical Journal about this, but it has not been deciphered what exactly is happening.

Think Global Health: That's fascinating. How common is that in the population you're seeing, and are there significant missed opportunities to treat it?

Yogesh Jain: India is the diabetes capital of the world. The assumption is that is related to changing food habits—having more refined foods, eating less fruits and vegetable—as well as the sedentary lifestyle that is happening among city people. In central India, certainly we see this type of diabetes, but not more than 50 percent of cases.

And we see a lot of diabetes in our clinic—close to 1,000 people with new diabetes every year. At the moment, we have over 15,000 people who are receiving treatment due to diabetes in our small hospital, which has around 300 outpatients a day. I will be seeing about 50 diabetes patients out of this group of 300, and with various forms of complications like a gangrenous or an infected foot, or they may be having diabetic kidney or eye or heart disease.

The diabetologists of this country suggest exercising more, eating less, and eating better types of food. But how would you advise that to someone who's undernourished and is diabetic. Asking the person to exercise when someone is working so hard already? And even oral medicines are only partially effective in lean diabetes. More often, you require insulin, and insulin requires some amount of cold storage, which is not an easy option in areas where refrigerators are expensive and not available in most houses.

No one understands why this disease is happening among the undernourished. Is it the Indian food policy, to give only cereals—either rice or extra wheat—to all the families who are officially poor? That may be worsening the diabetes situation rather than addressing it. Were we to do research and find that it was these food changes that have happened in the last 25 years, when we have been eating far more carbohydrates and less protein and less meat, we would have given more nuts, legumes, eggs, or fish to ensure that the food is more balanced, and it might have even prevented the surge of diabetes in rural areas.

It's not for us to solve these problems, we are problem-identifiers

Think Global Health: Understanding the full social and physical environment in which illness occurs is important, but it also seems incredibly ambitious to reshape all of those factors.

Yogesh Jain: It's not for us to solve these problems. We are problem-identifiers, opening it up for academic institutions or our own government to take it on, and the public health system to provide care.

Think Global Health: How much influence have you been able to have? Are you effective in the political process?

Yogesh Jain: We work hard and we have some small successes, but I think the most optimistic thing is to say that it's a work in progress. But fighting for health rights is always very difficult. When you are not sick, you don't ask for [health rights]; you don't feel the need. And when you're sick, you can't ask for it; you don't want to raise your voice because you know you might be denied care. That's a situation in unequal societies.

Think Global Health: Has that changed at all during COVID?

Yogesh Jain: I hope so, because we have suffered. America is the biggest example, but India has done extremely badly. We haven't seen a worse situation than this in our own lifetimes.

I'm not so hopeful about the sensibilities of our political leaders to be able to see this, but I still hope that we might learn something. There are provincial governments in India that are investing money into building health systems now. But this requires large funding, which provincial governments don't have, and our central government is still ambivalent about investing more. India is spending 1 percent of its GDP on health, compared to countries which are putting 8 percent or 10 percent.

India is spending only 1 percent of its GDP on health

Think Global Health: Where have you spent most of your time during the pandemic?

Yogesh Jain: Because of restrictions on movement and also because of my work, I have been in rural, central India these last 18 months, traveling to many rural areas.

Last year, infections were mostly in the large cities of India, not in the villages. We escaped almost any disease in the rural areas. But in April 2021, when we had made all the mistakes of not learning from other countries' experiences letting their guard down, the disease came back with a vengeance.

In the last 12 weeks, I have seen the disease go to almost all the remotest villages of India. That's fascinating in a sense even though it was very sad—that the disease could reach everywhere that not even a bus could reach. We have seen patients coming down with COVID and a humungous number of deaths that are unaccounted for.

Think Global Health: How are deaths being undercounted?

Yogesh Jain: There's a problem in the way we count COVID deaths. If you have not had a COVID test, you are not counted as a death due to COVID. So, what we need to study is total all-cause deaths — [and] in certain communities, where the number of [total, all-cause] deaths was usually about 6 to 7 per 1,000 people, it has increased 30 to 40 per 1,000.

In central India, in the villages here, the number of deaths has increased. For example, in the population of 40,000 where we have an intensive database, last year we lost no people. And this year, in the rural areas that we work in, there are already over 20 deaths that have happened due to COVID.

Think Global Health: Are the conditions stabilizing or worsening?

Yogesh Jain: The big disclaimer is that our testing in rural areas is very poor. But overall, my impression is that it is coming down, and the admission rates in most hospitals where people from rural areas go are decreasing. But I think it's going to be a prolonged decline. It might take eight to ten weeks more.

Our bigger problems are now that people are not ready for vaccination. Vaccine hesitancy has reached an enormous level; I would say almost 80 percent of people in rural areas would not be ready for vaccination now. If we only vaccinate 50 percent of our people in rural areas, we're not going to vaccinate India. And if we don't vaccinate India, the third wave cannot be predicted, cannot be prevented.

The other problem is mask-use is far from satisfactory. A lot of people are using some sort of mask, but they're using it poorly.

Think Global Health: Why is there hesitancy in the rural communities?

Think Global Health:  Last year you wrote about how the lockdowns interrupted care for many patients, including people suffering from chronic illnesses or undergoing cancer treatment. Could you expand a little bit on how COVID may have contributed or worsened the chronic disease burden?

Yogesh Jain: We saw this problem in Ebola in Africa, when all the people, all the machines, and all the resources are siphoned away for managing one problem to the detriment of all the others. In India, we also had very stringent restrictions that prevented people from going to hospitals or seeking health care, both for emergencies and for routine care.

Childhood immunization rates dropped by more than 30 percent because nurses and health workers were directed towards managing COVID. Chronic illnesses like hypertension, heart diseases, asthma, cancers, mental health problems—they all require regular care. If you drop out of HIV treatment for even one month, it is going to have a major consequence in terms of your outcomes.

Think Global Health: Coming out of the pandemic, what are the most important and immediate things that states or the national government should be doing to improve the health conditions, particularly for people with the least resources?

Yogesh Jain: We need to invest more: 1 percent is not okay. Immediately 3 percent of the GDP should be spent on health and that extra money should be invested in non-physician health workers, to ensure more community-based care. Doctors in India are not going to go to villages or low-resource areas. You can't push these guys because they belong to a different class. And while we should build up our surge capacity for COVID care, it should not be cannibalizing our non-COVID care.

And going for a universal health care paradigm is never more urgent than now. To protect us against the third wave and subsequent pandemics, but also to get people non-COVID care.

Think Global Health: Would you venture a guess on the probability Chhattisgarh will significantly expand health coverage in the next couple years?

Yogesh Jain: Always, I have been an optimist. I would say about 70 percent chance that we will be able to pull it off.