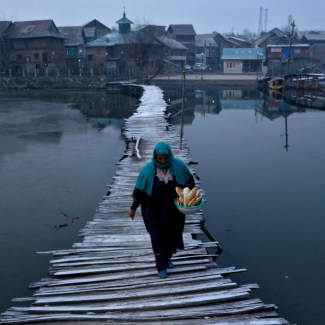 A woman carries bread as she walks on a frost-covered footbridge in the interiors of Nigeen Lake on a cold winter morning in Srinagar, India, December 24, 2020. REUTERS/Danish Ismail
by Siddhesh Zadey and Sweta Dubey October 27, 2022

Most Indian grandparents have witnessed at least one famine, in addition to India's omnipresent food poverty, during their lifetime. Arguably, their perception of "good health" is built on ideas around nutrition and the notion that good food is their first-line medicine. This has always been true for people in India and other parts of the world where poor nutrition causes more damage to children and mothers than most other diseases or catastrophes.

In India, a country of 1.4 billion, one child is born every two seconds. But not every child survives or lives a healthy life. Some of the most detrimental birth defects include neural tube defects—when the central nervous system structures (the spinal cord and brain)—do not form fully during embryo development. The prevalence in India has been found to be as high as thirteen and seventeen cases per ten thousand live and stillbirths.

In India, perception of "good health" is built on ideas around nutrition and the notion that good food is first-line medicine

With India’s high birth rate, these numbers translate to several hundred thousand neural tube defect cases, according to estimates from the Global Burden of Disease (GBD) study. Beyond the disease burden and the emotional toll on those affected, there is an economic burden of neural tube defects.

Neural tube defects are largely preventable, unlike some other congenital defects. Folic acid (FA), a type of Vitamin B, when consumed by women before pregnancy and in early pregnancy in recommended doses, can significantly reduce the risk of spina bifida and anencephaly in newborns. Women can consume supplements or folic acid-fortified foods to obtain the recommended daily amount—400 micrograms (mcg) of folic acid a day—to reduce the risk of neural tube defects.

Although widely implemented, the folic acid supplementation strategy has some important contingencies that health providers need to consider. Since the neural tube forms between four and six weeks after conception, folic acid supplementation to prevent neural tube defects is crucial within the first few weeks of pregnancy when many women may not be aware of their pregnancy. Starting a folic acid supplement later in pregnancy does not prevent neural tube defects. Early supplement consumption depends on several factors including public awareness, individual behaviors, preferences, and health-care access issues since the supplements are provided as part of prenatal care. In India, these factors influence compliance and lead to variability between rural and urban areas.

Why Fortifying Food With Folic Acid is Important for India

It has been estimated that implementation of folic acid fortification in countries without mandatory policy could have averted about 215,000 cases of spina bifida and anencephaly globally in 2019. In India, mandatory folic acid fortification of wheat and rice flour could have averted 22,006 cases in the country. Uttar Pradesh (4,085 averted neural tube defect cases), Bihar (2,364), and Maharashtra (2,084) would have been among the states that benefitted the most.

Diets and foods in India vary every few miles. While wheat-based foods are more common in northern parts, rice is a more common staple in southern states. Pulses consumed are diverse across regions depending on local crops and food traditions. Chicken and goat form major meats while milk and milk products including different forms of sweetened milk, curd, paneer, and buttermilk are common throughout the country. Meals typically include seasonal vegetables along with potatoes and onions being commonplace. Recent decades have seen a major movement toward food fortification in India. For instance, in 2000, West Bengal was the first state in India to attempt the distribution of fortified wheat flour (iron, folic acid and B12) through its Public Distribution System—a food security system to provide grains at affordable prices to the needy—under its Micronutrient Initiative. Gujarat followed the West Bengal model and started the distribution of fortified wheat flour through the Public Distribution System in 2006.

As of April 2022, in response to a centrally-sponsored 2019 pilot scheme, Fortification of Rice and its Distribution Under Public Distribution System, folic acid- and iron-fortified rice are being made available across two hundred fifty-seven districts in fifteen states (Andhra Pradesh, Gujarat, Maharashtra, Tamil Nadu, Chhattisgarh, Uttar Pradesh, Odisha, Telangana, Uttarakhand, Madhya Pradesh, Kerala, Karnataka, Assam, and Jharkhand) covering more than eleven million beneficiaries through the Indian government's  Mid-Day Meal program run in schools and anganwadis (child care centers) and Public Distribution System scheme. The plan is to provide fortified rice in all government nutrition-related schemes throughout the country by 2024.

The rice fortification program has several drawbacks and challenges. The fortification efforts in India till now have aimed to address micronutrient—iron, folic acid, and vitamin B12—deficiencies and the resulting malnutrition and anemia, thereby completely neglecting  neural tube defects among children. The folic acid dosage used in the rice fortification program is in line with recommendations by the Food Safety and Standards Authority of India (FSSAI) 2018 guidelines (for example, 12.5 micrograms/100 grams). However, this is more than ten times lower than FSSAI 2016 guidelines and WHO recommendations, which are 130  mcg/100 g. It is also in stark contrast to global literature. The average folic acid dosage in countries with mandatory fortification is 179 mcg/100 g, with dosage variations across countries. The CDC, American Medical Association, and American Academy of Pediatrics have suggested a dose of 350 mcg/100 g to prevent  neural tube defects. Concerns surrounding low folic acid dosage have led to calls for revising the FSSAI 2018 standards by national and global food fortification organizations including the India Birth Defect Prevention Task Force and the Food Fortification Initiative.

Wheat is the second most commonly consumed food grain in India

Wheat is the second most commonly consumed food grain in India. Including folic acid fortified wheat flour in the program will ensure better population coverage and neural tube defects prevention where it is most needed, especially in Uttar Pradesh, Bihar, Rajasthan, and Madhya Pradesh—the geographically large and densely populated  states in North and Central India. These states are predominantly wheat consuming, have limited coverage of folic acid supplements for pregnant women and suffer from a large neural tube defect burden.

The Public Distribution System covers up to 710 million Indians, mainly those living below the poverty line, who are vulnerable when it comes to food and nutrition. Providing FA-fortified rice through PDS can have a massive impact on neural tube defects prevention in this particular population. However, steps need to be taken to ensure  neural tube defects prevention among the other 50% of people who are not covered by the Public Distribution System. One way to achieve this would be mandating folic acid fortification at the level of commercial flour manufacturers and grain wholesalers through state-led regulations.

A major impediment to any such program in India is quality control in implementation. Involving national and international food fortification agencies that have collaborated with Indian states to provide expertise in implementation and quality checks for fortification is crucial. For example, in Haryana, the Food Fortification Initiative, has assisted in fortifying wheat flour with 130 mcg/100 grams of folic acid distributed to beneficiaries of the Public Distribution System scheme, Mid-Day Meal program, and Integrated Child Development scheme.

Since gaining independence in 1947, India has always strived to build better lives for her children. When it comes to neural tube defects, there is a problem, a clear fix, and a mechanism to deliver that fix. There should not be any room for failure. Mandatory folic acid fortification isn’t just about food, it is about fortifying the healthy futures for the  children of India—expected to become the country with the largest population by 2022.

Siddhesh Zadey is a researcher in the Department of Surgery at Duke University School of Medicine in Durham, North Carolina, and a co-founder of the Association for Socially Applicable Research (ASAR).


Sweta Dubey is a practicing doctor in Nagpur, India, and a co-founder of ASAR. She is the SDG-3 team lead at Green Governance Initiative, a youth-led policy think tank, and a global youth ambassador at Theirworld, a UK-based non-profit working towards global education. Her research interests are child health, health policy, and health systems research.