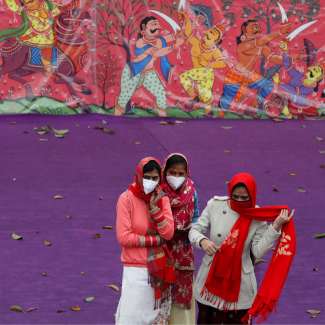 In India, cervical cancer is common. One woman dies of cervical cancer in India every eight minutes. Almost 95 percent of these cases are caused by human papillomavirus (HPV), a common sexually transmitted infection (STI).

Despite being a curable disease if detected early, cervical cancer contributed to 9.4 percent of new cancer cases and nearly 70,000 deaths in India in 2020. The high occurrence of cervical cancer and related deaths in India is attributed to low literacy, poor screening, low awareness, social inequality, stigma, and poverty—the same factors it's linked to in other low-income and lower-middle-income countries.

Despite being a curable cancer if detected early, cervical cancer contributed to 9.4 percent of new cancer cases and 70,000 deaths in India in 2020

Proven strategies to reduce cervical cancer occurrence include HPV vaccination, cancer screening, and a combination of the two. Vaccination protects against the disease while screening helps identify cases earlier and then treat the disease at this very early stage, before cancerous cells spread to deeper tissues.

A study published in The Lancet in 2020 looked at seventy-eight low-income and lower middle-income countries—modeling potential human papillomavirus (HPV) vaccination and cervical screening scenarios—and predicted that vaccination against nine strains of HPV would halve the occurrence of cervical cancer in all age groups by 2061, and even earlier, by 2048, if vaccination is accompanied by twice-lifetime screening.

To accelerate the elimination of cervical cancer as a public health problem, the World Health Organization (WHO) introduced a global strategy that proposes that 90 percent of girls should be vaccinated with the HPV vaccine by fifteen years of age, 70 percent of women should be screened twice in their lifetime (at ages 35 and 45), and 90 percent of women diagnosed with cervical cancer should get appropriate treatment. In contrast, in India, only opportunistic screening to look for early cancerous lesions has been advised in the National Programme for Prevention and Control of Cancer, Diabetes, Cardiovascular Diseases and Stroke (NPCDCS). HPV testing, and mandatory screening and vaccination are still not feasible in India's resource-constrained setting.

The HPV vaccine was introduced in India in 2008, but it has not been included yet in the National Immunization Programme and the data on the extent of coverage of HPV vaccination in India is limited. There are two kinds of cervical cancer vaccines currently available in India—Cervarix, consisting of two HPV strains, and Gardasil, which provides protection against four HPV strains. But their uptake has been low. The government of India, in partnership with the Serum Institute of India, on September 1, 2022, announced the launch of India's first indigenously developed cervical cancer vaccine, CERVAVAC, promising not only affordability but also accessibility. It offers protection against four strains of the HPV virus, similar to Gardasil.

Introducing the CERVAVAC vaccine, which costs nearly ten times less than the previously available vaccines, will address the barrier of affordability and hopefully, will increase vaccine uptake. However, there are various other barriers that need to be addressed in order to succeed in vaccinating the majority of girls and women who should be vaccinated. Cervical cancer awareness in the Indian community has been alarmingly low over the years despite the country having a high disease burden. This, coupled with the stigma around the disease, act as significant barriers to vaccine uptake. As cervical cancer is related to sexual activity, the taboo of sex leads to low willingness among Indian parents to vaccinate their children. The vaccine is considered unnecessary by parents for their sexually inactive children and it is feared that vaccination would promote promiscuous behavior.

Also, women reported low knowledge about the vaccine and fear of complications as barriers in a study in Delhi in 2018. While the vaccine offers some protection, there may be misconceptions that it is enough and screening is not necessary, leading to a false sense of security. This could further reduce screening.

As vaccination is advised mostly in the younger age group (starting at nine years of age), the misconception of missing the "right" age of getting vaccinated affects vaccine uptake. Even though the vaccine works best in young, sexually inactive women, it still offers some protection in sexually active women of reproductive age. A fact the majority are unaware of.

As HPV infection is falsely believed to cause cancer only in women, the existing gender disparity in health care in India has resulted in poor efforts to increase vaccine and screening uptake among boys and young men, as well. In 2017, an expert committee recommended the Ministry of Health Family Welfare (MoHFW) include the HPV vaccine in the universal immunization program, however, in 2018 the ministry decided against it, citing budgetary constraints as the reason. The affordable indigenous vaccine now offers a solution to this problem.

Relationship Between Level of Education and Cervical Cancer in India, 2020

Percentage of cervical cancer cases vs. level of education

Advantages of an Indigenous, Affordable Vaccine

The provision of subsidized vaccines and their inclusion in government immunization programs have been perceived as facilitators for vaccine uptake by women. Without the vaccine, the only way to tackle the high burden of cervical cancer is through cervical cancer screening. Despite there being broad guidelines for screening, the uptake has been low. Besides poor awareness and misbeliefs, various structural barriers—inadequately equipped health facilities, and lack of properly trained health professionals—have contributed to ineffective screening coverage. The vaccine in this scenario offers a short-term solution. Till appropriate infrastructure for large-scale screening is built and an adequate number of healthcare workers like doctors, nurses, and community healthcare workers are trained, widespread vaccination can help to reduce cancer cases by protecting against infection.

With the introduction of CERVAVAC, a vaccine program with or without screening, in the long run, could be more cost-effective than scaling up screening services alone. India already has the required infrastructure in place for the development, production, and distribution of vaccines as evidenced by its previous successful immunization programs for polio (Pulse Polio) and COVID-19 vaccination. Improvement in vaccine acceptance, seen after the COVID-19 pandemic, might also help improve HPV vaccine uptake if the new indigenous vaccine is made easily accessible.

If proven effective, CERVAVAC will also help address the problem of cervical cancer on a global scale. Globally, cervical cancer is the fourth leading cause of cancer-related deaths. An estimated 600,000 women were diagnosed with cervical cancer worldwide in 2020. If successful in controlling the burden of cervical cancer, India would be an exporter of an inexpensive vaccine to other countries and also a provider of solutions to this complex problem.

An affordable and accessible HPV vaccine could address India’s cervical cancer burden if other barriers surrounding vaccination are addressed at the same time. Including it in the national immunization program will make people realize its importance, as well. Mass awareness campaigns to address vaccine-related myths need to be organized prior to initiating mass vaccination in order to increase its acceptance. At the same time, screening programs need to be strengthened in the country because combining them with vaccination will offer a long-term, sustainable solution to the rising cervical cancer disease burden in India.

Anoushka Arora is a third-year medical student who volunteers as a research intern at the Association for Socially Applicable Research (ASAR), Pune, India.


Parth Sharma is a physician, researcher, and writer who likes exploring evidence-backed solutions to common public health problems. Dr. Sharma is the blog editor at the Association for Socially Applicable Research (ASAR), Pune, India, and a commission fellow in the Lancet Citizens’ Commission for Reimagining India’s Health System.