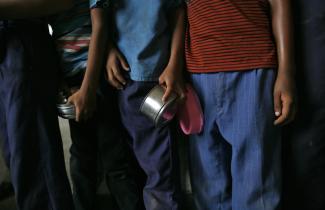 School boys carry their tiffin boxes as they wait to receive their midday meal, distributed by a government-run primary school, in New Delhi, India. REUTERS/Mansi Thapliyal
by Santosh Kumar October 26, 2022

Anemia, caused by iron deficiency, is widespread among preschool and school-age children in low- and middle-income countries, and among women of reproductive age. The prevalence of anemia among children under five is uneven across World Health Organization (WHO) regions—highest in the African region (60.2 percent) followed by South Asia (55 percent). Anemia is particularly high in India. While addressing it is complex, solutions exist, and fortifying school lunches with iron may be one way to lower anemia rates in children, and in turn, improve their health later in life.

People with anemia have a lower quantity of hemoglobin, which decreases the oxygen-carrying capacity of blood. In chronic and severe cases, it can cause illness, and even death, among women and children. Globally, about 40 percent of children ages 6 to 59 months were anemic in 2019—equivalent to 269 million children.

60 percent of children under five in India have anemia

A recent health survey shows an anemia prevalence of 60 percent among children under five in India. The majority of anemia cases in India are due to iron deficiency, from eating foods low in minerals and micronutrients, including iron. This is a significant concern because iron deficiency in early life is strongly associated with impaired cognitive and behavioral development in children, and with decreased educational attainment and work productivity later in life. Against this backdrop, reducing the high prevalence of anemia among children in India and other developing countries is an urgent public health priority.

The link between the consumption of iron-rich or fortified foods and anemia is well-documented, but identifying the most effective distributional channels to provide iron to children remains an uphill task. The uptake of fortified food items has been limited in developing countries. For example, a 2018 study published in the Journal of Development Economics showed that market-based supply or free delivery of iron-fortified salt had no impact on anemia incidence—primarily due to the limited use of iron-fortified salt by households. Households were reluctant to either buy iron-fortified salt from the market or use it in their meal preparations. The puzzling evidence in the study implies that the choice of distribution channel is important in anemia prevention and market-based intervention may not work in a setting where demand for health products is low.

In a recent field experiment (conducted by the author and his colleagues), the study used the world’s largest school feeding program, the midday meal (MDM) in public primary schools, as the delivery channel to provide iron to primary schoolchildren in Bihar, one of the poorest states in India. The Indian MDM program covers more than 100 million children in about 1.2 million schools and provides free lunches to all children who attend a public school from grades 1 to 8. The study provided iron-fortified salt for lunch preparation to fifty-four public primary schools for a year, and fifty-three schools in a control group used conventional salt to prepare school lunches. The use of iron-fortified salt in the MDM provides a regular, steady, and daily provision of iron to children—which is better than intermittent provision of iron supplementation (usually in the form of pills, capsules, or syrups). Because salt is universally consumed regardless of the economic status of households, it is easily available, and is inexpensive. The fortified MDM provided 3.5 mg of additional iron per meal which met 35 percent of the daily iron need of the schoolchildren.

The analysis included a sample of 2,000 grade 2 children drawn from 107 schools. The anemia rate in the baseline sample was 42 percent before the start of the project. The study evaluated the causal impacts of iron-fortified school lunches on hemoglobin, anemia, and cognitive development of 7 to 8-year-old children.

The study found that the school-based distribution of iron through the MDM program was effective in reducing anemia among schoolchildren in Bihar. Hemoglobin levels increased by 0.185 grams per deciliter (g/dL), or by 1.6 percent among children who consumed one fortified meal a day throughout the school year. The increase in hemoglobin levels led to a reduction in anemia prevalence by 22 percent.

Prior research has shown that improvement due to a reduction in micronutrient deficiencies positively affects cognitive abilities. Surprisingly, our trial did not find any significant impact on the cognitive scores of children. The most plausible reason for the zero impact on cognition despite the reduction in anemia is that the study was designed to detect anemia outcomes but had a limited sample size to detect a significant effect on cognitive scores. The other possibility could be that a low dosage of iron only in one meal per day was not enough to change the cognitive development of children. Another interesting finding is that the trial brings greater benefits to girls compared to boys.

Despite significant improvements in the standard of life and economic prosperity in India over the past decade, iron-deficient anemia remains a widespread problem, especially in some states and regions. The state of Bihar, for example, is poorly equipped to establish an effective distribution system to deliver fortified food products at scale and at low cost, or to ensure high uptake of fortified products by households.

While potential delivery channels in India include "market institutions" such as retail shops or "non-market institutions," including hospitals, schools, and government offices, our study shows that school-based distribution of iron through school lunch programs could be an effective delivery channel in reducing iron deficiency among school children. The existing network of public schools can be effectively used to implement health programs that tackle malnutrition among children.

Globally, about 380 million schoolchildren are served school lunches daily and if these school lunches are fortified with iron and other micronutrients, the high rate of micronutrient deficiencies—including iron deficiency—could be reduced significantly in low- and middle-income countries (LMICs).

In 2018, the government of India launched Anemia Mukt Bharat (AMB), or Anemia Free India Campaign, to reduce anemia prevalence among vulnerable groups. The AMB program includes the Weekly Iron and Folic Acid Supplementation Program that administers 100 milligrams (mg) of elemental iron and 500 micrograms (ug) of folic acid to school age girls and boys in grades 6-12 enrolled in public schools. These programs are likely to accelerate anemia reduction among women, adolescents, and children.

Policymakers in India and other LMICs need to recognize that a school-based supply of micronutrients is a low-cost, less burdensome, and effective strategy for tackling malnutrition among children.

Dr. Santosh Kumar is an associate professor of development and global health economics at the Keough School of Global Affairs at the University of Notre Dame, in Notre Dame, Indiana. Dr. Kumar’s research investigates the relationship between children’s health, human capital, and economic development. Much of his research work involves estimating the impact of early-life health on human capital with an emphasis on South Asia.