Go to homepage
Pig Pandemics and Other "Epizootic" Threats
Food

Pig Pandemics and Other "Epizootic" Threats

COVID-19 is scary, and so are disease outbreaks in animals—they cause great economic devastation and disrupt human lives 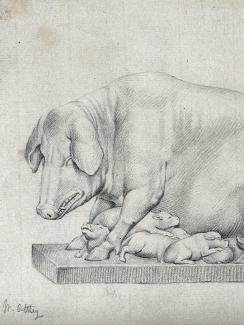 A statue of a hog with litter of suckling piglets. Pencil drawing by William Young Ottley (1771-1836). CC BY 4.0 via Wellcome Collection
by Ravensara S. Travillian June 16, 2020

A disease doesn't need to infect people to affect people. Diseases at the human/animal/environment interface can interact with the species involved in many different, sometimes unpredictable, ways. Current media coverage focusing on COVID-19, a classic emerging infection that apparently jumped to humans from wildlife, reminds us how threatening such interactions can be. Zoonotic diseases, which cross species lines to infect humans, differ from other animal diseases that do not infect humans but have the potential to become epizootic—meaning they can cause widespread disease outbreaks in non-human species like farm animals. But just because we aren't immunologically susceptible to epizootic diseases doesn't mean they aren't dangerous to us in other ways.

African swine fever presents a timely example. A serious, extremely contagious disease, it can kill up to 100 percent of infected pigs through fever and extensive hemorrhaging. And while, it can't infect humans, it still has a tremendous impact on our lives because it's a huge threat to worldwide pork production—currently a $400 billion per year industry. An African swine fever outbreak that began in China in 2018 led to the loss of over 40 percent of that country's entire stock of pigs—one out of four of all the pigs in the world—representing $141 billion in losses by the beginning of 2020.

Pigs can contract African swine fever directly from other pigs, from ticks, or from shared housing. Caused by double-stranded DNA viruses of the genus Asfivirus in the family Asfarviridae, African swine fever probably arose in forest ticks. Molecular evidence suggests the virus jumped to wild pigs some four hundred years ago. Wild and feral pigs remain substantial reservoirs for the virus, as do ticks when no porcine hosts are available.

If African swine fever had been discovered today, instead of in 1921, it would have had a very different name. World Health Organization (WHO) best practices specifically recommend against naming infectious diseases after people, communities, or places, because of the high risk of prejudice against the people and places, and the stigma that may be attached to the illness. This sensibility to the effect disease names could have on groups of people reached public awareness in the 1980s, when "HIV" (the virus) and "AIDS" (the disease) replaced the derogatory names that people had formerly been using. Nowadays, before naming a newly-emerging disease, researchers and clinicians seek a more neutral and non-regional name, and "African swine fever" would not be up to the best practices standard. But the name is already so well-established in the literature and in the community of practice that it is unlikely to ever be changed.

A Hardy and Destructive Little Virus

The virus can survive for months in frozen, raw, cured, or cooked meat, and because of this it can travel thousands of miles around the world before detection.

Just a few cases in a region can lead to massive culls, destroying livelihoods and shuttering local pig farms indefinitely

This extreme durability means many infection-control measures appropriate for other diseases are inadequate against the virus. At a minimum, strict quarantine of surviving animals and lengthy evacuation of facilities are required, due to the high risk of re-infection. But outbreaks are often handled in a more heavy-handed way by simply killing all the infected pigs. Healthy pigs in proximity to those that die of African swine fever are often euthanized as a precaution, due to risk of major outbreaks. This may be a sound infection control policy, but its consequences can be devastating to farmers. Just a few cases in a region can lead to massive culls, destroying livelihoods and shuttering local pig farms indefinitely.

Disease outbreaks in livestock can cause substantial economic hardship. In countries such as China, the economy is heavily dependent on large-scale swine production, as demonstrated by the sheer number of pigs lost in 2018–2020.

Shocks are unevenly distributed, falling hardest on those who can least afford to absorb them

In other countries such as Malawi and Uganda, small-scale pig livestock programs have successfully alleviated poverty and promoted sustainable food security. But outbreaks in either context can disrupt food and product supply chains, and these shocks are unevenly distributed, falling hardest on those who can least afford to absorb them. One culling program in Nigeria resulted in the slaughter of 300,000 pigs and endangered the livelihood of 3,000 farmers. In Vietnam, where small-family pig farms provide economic independence and security to non-Viet minority populations, the loss of this lifeline often has the largest impact on women.

Our human-economic web is fragile, particularly given modern tendencies toward specialization and local monocultures. Large-scale epizootic failures of livestock herds, even when quickly contained, can cause shocks that quickly ripple through many other sectors of the economy.

Shocks like African swine fever outbreaks may turn into permanent losses through destruction of farms, jobs, and regional investment. Epizootic and zoonotic disease burdens are not equal-opportunity challenges, but clearly fall hardest on the people and communities least able to rebound from them.

The United States is home to nearly 12 percent of the world's 677.6 million pigs

To guard against more epizootic harm in the future, we must begin planning for all types of major disease effects—both direct and indirect. What happens worldwide if COVID-19 is still raging next year, and then African swine fever reaches the United States (home to nearly 12 percent of the world's 677.6 million pigs), forcing a slaughter policy that affects domestic and for-export meat production? What we need is a "one health" approach that anticipates, monitors, and plans for contingencies on multiple human, animal, and environmental fronts, and actively plans how to contain (or at least mitigate) global and local risks. This could provide the resilience needed in the ever-more-likely case it happens.

Here are some of the major milestones in the disease's one-hundred-year history.

• 1921, Kenya. A group of children, laughing and running, heads to an enclosure to feed the family pigs. One of the piglets moves more slowly than the others, shaking and unsteady. In the joyful hubbub, none of the children notice.

• 1957, Lisbon. A decision to repurpose airline meals waste as food for domestic pigs proves very costly in hindsight, because the meat contained the ASF virus, leading to a massive cull of pigs before the outbreak could be contained.

• 2018, Belgium. Wild boars suffer an outbreak, possibly caused by careless transnational sport-hunting management. This event leads to the slaughter of 4,000 domestic pigs and the barring of recreational users from the affected forests.

• 2020, Vietnam. Following initial report of an outbreak in China in 2018, African swine fever spreads beyond all six Chinese regions to South, East, and Southeast Asia. In Vietnam alone, 5.7 million pigs were slaughtered to control the outbreak.

EDITOR'S NOTE: The author was previously employed by the University of Washington’s Institute for Health Metrics and Evaluation (IHME) when writing this essay. IHME collaborates with the Council on Foreign Relations on Think Global Health. All statements and views expressed in this article are solely those of the individual author and are not necessarily shared by their institution.

Ravensara S. Travillian is a data scientist, teacher, and science writer in Seattle.

Need health care and groceries? Congress should protect the immigrant workforce—even if the Trump Administration won't