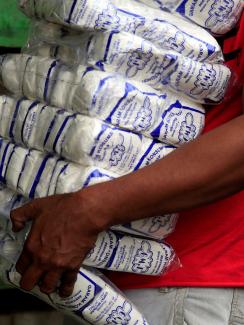 A worker carries packs of table salt at a warehouse in Jakarta, Indonesia, on March 14, 2018. REUTERS/Beawiharta Beawiharta
by Katherine Leach-Kemon December 12, 2019

When you are busy, it’s hard to eat healthy food. As the mother of two young children who works full-time in the field of global health and has a spouse who has a full-time job I work hard to make sure my family is eating healthy meals. After I pick up my kids from childcare, I scramble to prepare food as fast as possible to ensure that they get to bed at a reasonable hour. On some of the busiest days of the week, processed food or takeout meals from restaurants would make my life easier, yet I hate the thought of so much sodium. Living in the United States, I find it extremely challenging to find processed foods with lower sodium. For example, after scouring the refrigerator and freezer cases at my local grocery stores in Seattle, I have found just one brand of ravioli, one of my kids’ favorite meals, that qualifies as “low sodium,” according to the U.S. Food and Drug Administration (FDA,) containing less than 140 mg of sodium per serving.

Sometimes I wonder, why does eating healthy have to be so hard?

Sodium is linked to more than 3 million deaths annually, contributing to diseases and major leading causes of death.

In the vast majority of countries, people are eating too much sodium, an epidemic that is growing. Processed and restaurant food, which tend to contain more sodium than fresh food prepared at home, are major drivers of the world’s sodium epidemic. Researchers behind the Global Burden of Disease Study, which is led by the Institute for Health Metrics and Evaluation (IHME) at the University of Washington, recommended consuming no more than 3,000 mg per day, but the global average consumption of sodium is 5,600 mg per day. Sodium is linked to more than 3 million deaths annually, contributing to diseases and major leading causes of death such as ischemic heart disease, stroke, and hypertensive heart disease. High sodium intake is also linked to chronic kidney disease and stomach cancer.

When it comes to sodium, China, many countries in Asia, the Baltic nations, parts of South America, and the United States and Canada consume the most, double or more the recommended limit according to the Global Burden of Disease Study 2017. Traditionally, in China and many other countries along the Silk Road, sodium is the most common way of preserving food, which helps explain the high trends in this region.

What’s more, sodium consumption around the world may be an even bigger problem than we realize. The most accurate data on sodium intake come from analyzing twenty-four hour urine samples, which require substantial resources to collect. Hence, this type of data is much more plentiful in high-income countries compared to low-and middle-income countries. Collecting higher-quality data on sodium consumption in low- and middle-income countries is essential for gaining a better understanding of the magnitude of the situation.

How can we get people to reduce the amount of sodium that they consume? Personally, I’ve tried to follow the advice of “cook at home more frequently,” but I find it challenging, particularly on days when I am running late and may have only fifteen minutes to get food on the table while my children are edging toward a meltdown from hunger and fatigue. The food and restaurant industries need to make it easier for people to make healthier choices.

The food and restaurant industries need to make it easier for people to make healthier choices.

In the United Kingdom, the government started a program in 2003–2004 that did exactly this—with smashing success. The program reduced the nation’s sodium intake by 15 percent. It succeeded by getting the food industry to meet voluntary targets for sodium reduction with the threat of legislation if they didn’t. The program also included a campaign to increase public awareness about the dangers of sodium. In total, the program cost £15 million, yet saved an estimated £1.5 billion per year in health care costs averted. The UK government’s approach to sodium reduction is worth replicating around the world to save lives and money.