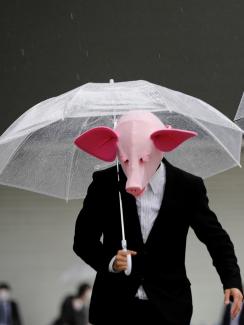 Youtubers wearing masks of pigs film a video at a shopping district, which has fewer people than usual amid the coronavirus outbreak in Tokyo, Japan, on May 19, 2020. REUTERS/Kim Kyung-Hoon
by Edward Mack May 27, 2020

As you read this, tens of millions of people around the country have been suddenly displaced from their jobs due to coronavirus—many with families to feed. In the United States alone, 59 percent of workers live paycheck to paycheck [PDF]. Despite political rhetoric, this crisis likely isn’t coming to an end any time soon. We have already seen some horrific consequences of the pandemic, with a U.S. caseload of more than a million and deaths from COVID-19 approaching 75,000 as of May 8. Even so, we have not yet realized the pandemic's potential threat to our food supply. Indeed, coronavirus poses danger to the domestic and global food supply unlike anything seen in recent history, and the U.S. is not prepared for it.

Where Does our Food Come From?

In 2017, there were approximately two million farms across the United States

In 2017, there were approximately two million farms across the United States, although farmers make up only 1.3 percent of the U.S. workforce. Of those farms, small-scale family farms represented 89 percent of all farms by number, but only account for 26 percent of production by volume. Large-scale family farms accounted for only 2.5 percent and 39 percent, respectively. Crop production is focused in California and the Midwest, with corn, wheat, soybeans, cotton, and hay representing around 90 percent of harvested acreage in the United States. Demographically, farmers (excluding farmworkers) are an aging population—the average age of a farmer is fifty-eight years old, making them particularly at risk to coronavirus.

How Has COVID-19 Affected Food Producers?

It is important to understand that the biggest threat to the global food supply chain as of right now isn’t necessarily to production itself—in many cases, farmers have been able to produce just as much as they were before the crisis. As it stands, the production of many staple crops (such as wheat, corn, and soybeans) is largely mechanized and has therefore been less affected by the crisis as fruits and vegetables. The issue we face right now is one of transportation, where tight restrictions on trade and movement have compromised the ability of food items to actually get to market. This has led to instances of mass dumping, evocative of Great Depression-era inefficiency. The food supply chain, being an intricate series of steps, can break down entirely if producers are unable to sell their goods.

Additionally, American agriculture is heavily dependent on migrant workers, up to 2.7 million of whom are undocumented. General living conditions of these workers leave them at much higher risk of infection of coronavirus, given that many live with up to ten other people in cramped quarters, share transport, and are often subject to dangerous chemicals that can worsen coronavirus cases More than that, their often-undocumented status leaves them largely unable to receive adequate medical care.

One component of the food processing industry that is being hit particularly hard are the meat packing plants. According to a report in the New York Times, a mere fifty slaughterhouses are responsible for around 98 percent of domestic meat processing. Indeed, the report noted, “shutting down one plant, even for a few weeks, is like closing an airport hub.” As of May 7, fifteen major meatpacking facilities were offline, with American pork production having dropped by half. Grocery stores might have to reduce meat offerings by a third by Memorial Day, with prices around 20 percent higher. More than a third of America’s total meat processing plants are located in counties with infection rates that are among the highest in the country, so more closures are expected. When they do reopen, production could still be reduced by up to 15 percent.

The USDA's guidance for its own food inspectors, 'doesn’t protect the individual one bit.'

The U.S. Department of Agriculture (USDA) inspection workforce is also experiencing a hit in the pandemic. Since the beginning of the outbreak, the USDA and its regulatory agency the Food Safety Inspection Service have not provided their employees with the necessary protections to safely operate inside many processing facilities. Paula Schelling, head of the American Federation of Government Employees National Executive Council (which represents 6,500 Food Safety Inspection Service employees), said that the guidance provided by the agency “doesn’t protect the individual one bit.” One inspector died of COVID-19, with at least eleven others having tested positive. Tony Corbo, the senior lobbyist for the nonprofit advocacy group Food and Water Watch, said that social distancing at most facilities is “practically impossible.” According to Corbo, inspectors will increasingly decide to stay home as the situation worsens, thereby causing additional plants to close, and help create a food shortage.

In the transition to a society in the world of coronavirus, one industry has seen a massive increase in demand—food retailers. As home cooking becomes more the norm, grocery shopping has increased by 26 percent, with certain online grocery services experiencing demand spikes of up to 150 percent.

Grocery shopping has increased by 26 percent, with online services experiencing spikes of up to 150 percent

Toward the beginning of the shutdown, many retailers were unable to keep up with demand for certain products (most notoriously, toilet paper and yeast). While some have begun to adjust, there are still many issues that they have yet to grapple with, especially given supply issues in certain industries. Online grocery services, such as Instacart, are experiencing the biggest boost of all, with certain weeks experiencing an increase of over 100 percent in demand. This demand shock has resulted in massively increased waiting times, with many online services being backed up by more than a week, and some not even accepting any new customers. These backups come at a time when some retailers are testing online-only shopping locations in particularly affected areas, such as New York, Baltimore, and San Francisco.

Various retail chains have attempted to rapidly increase their temporary workforce, albeit with relative failure – with fewer and fewer workers are willing to work in a dangerously crowded environment for minimum wage.

Employee safety is also a substantial issue, with dozens of grocery workers having died and thousands more having fallen sick. Some retailers have offered a “hero bonus” to prospective employees in the form of a $2 raise during the crisis, although many have taken offense to this given that it still does not amount to a living wage. The low pay in conjunction with a lack of paid sick leave has resulted in many of these jobs being left open.

So, What Can Be Done?

One thing is certain—COVID-19 isn’t going anywhere anytime soon. At least for the foreseeable future, this has become the new normal. Whereas the number of people globally who will face acute food shortage could double this year, the United States will be relatively insulated from the brunt of the impacts, at least at first. Lower income countries are the most susceptible to food shortages, and will experience the first and perhaps the worst of it. Domestic food production will also provide the United States with a “grace period” of sorts in which food supply will go relatively unaffected. However, as the pandemic extends, there could be more and more strain on the American food supply. In the United States, there needs to be a significant number of adjustments made on behalf of food producers, transporters, processors, and retailers to combat a potential food shortage.

Food must be more rapidly transported from where it is produced to where it is needed most, so as to avoid unnecessary food waste

Trade channels must stay open. Trade barriers, export restrictions, and tariffs should be reduced, not only so that imports can flow as regularly as possible, but also so that the United States can play its part in avoiding a global famine. Working in conjunction with other countries in good faith will benefit all, especially when faced with such a global pandemic. There must be a stronger emphasis on protecting logistics between producers and processors, and processors to retailers. Any delay in transportation of food products could have significant impacts on food supply. Relatedly, food must be more rapidly transported from where it is produced to where it is needed most, so as to avoid unnecessary food waste.

Significant reforms to our agricultural system are necessary. In a recent article, University of Texas research professor Raj Patel noted that the “horror stories” of mass dumping occur fairly exclusively in “industrial supply chains,” as opposed to smaller and more biodiverse agriculture networks. In fact, he points out that those smaller farms are even rushing to keep up with demand. Our highly centralized industrial food system is one of the largest threats to our future food supply, and must be decentralized in the name of resiliency.

Greater protections for essential workers must become mandated. From agricultural workers, to food inspectors, to grocery store clerks, the safety of the employee must be the very first priority. This does not only mean providing masks, but also ensuring that the people who work in the food chain are provided adequate working conditions, paid a living wage, have access to necessary health care, and are provided paid sick leave. The Donald J. Trump Administration’s effort to lower foreign guest workers’ wages could have negative consequences for all blue-collar workers.

These are hard times for everyone—but there’s no need to make them harder. Taking swift action to ensure both worker safety and the sustainability of our food supply should be one of our top priorities. For far too many, it is a matter of life or death.

Edward Mack is a senior pursuing a degree in international relations at the University of Southern California.

Need health care and groceries? Congress should protect the immigrant workforce—even if the Trump Administration won't