The Pandemic and the Future of India's Foreign Policy 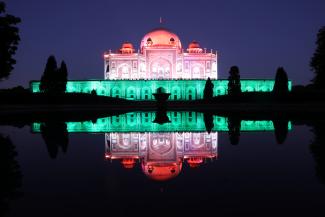 For India, COVID-19 has been a disaster. At home, India suffered through a "humanitarian calamity" during the surge of coronavirus illnesses and deaths in 2021. These domestic travails derailed India's attempt to use its world-renowned pharmaceutical manufacturing capabilities to provide COVID-19 vaccines to low-income countries and to reduce global vaccine inequity. The pandemic should force a reckoning within India on both domestic and foreign policy. In terms of foreign policy, the COVID-19 catastrophe requires India to repair its reputation for humanitarian assistance, rethink its approaches to China's rise, and revise its strategies for securing its national interests in a more dangerous world.

Despite its poverty, India has a tradition of humanitarian action in its neighborhood and beyond. It has served as a haven for Tibetan refugees fleeing Chinese oppression, sheltered Bengali Muslims and Hindus during the brutal military crackdown in East Pakistan, and offered solace to Tamils escaping the Sri Lankan Civil War. After the Christmas tsunami of 2004, India was one of the first countries to organize a sustained and effective program of humanitarian relief by rapidly deploying its navy and working in concert with Japan, Australia, and the United States. In global health, India's pharmaceutical companies became major suppliers of antiretroviral drugs to low-income countries and contributed to the global progress made against HIV/AIDS.

Given this long-standing commitment to humanitarian assistance, India's initial efforts to address the COVID-19 pandemic are not surprising. With much fanfare in early 2021, the government of Prime Minister Narendra Modi simultaneously began vaccinating the Indian population with domestically produced AstraZeneca vaccine, known as Covishield in India, and sending millions of AstraZeneca doses to neighboring countries and beyond. India's approach contrasted with the "vaccine nationalism" that characterized pandemic policy in the United States and other high-income countries.

In addition to burnishing India's humanitarian credentials, the Indian government's foray into COVID-19 vaccine diplomacy had one eye firmly cocked on its principal adversary, the People's Republic of China, which was launching its own vaccine diplomacy with Chinese-developed vaccines. The Indian government hoped that swift action on the vaccine front would enable India to counter China's growing influence in South Asia and elsewhere.

By being generous and geopolitically savvy, Prime Minister Modi believed that India had beaten the pandemic domestically and could be a major source for COVID-19 vaccines around the world—a state of affairs he announced at the World Economic Forum in Davos in January 2021. In early March, as the pandemic continued to rage across the world, Prime Minister Modi declared that India was the "pharmacy of the world"—a boast with more credibility at the time than President Joe Biden's later promise that the United States would be the "arsenal of vaccines."

The Indian government's strategy came to a grinding halt when it became increasingly apparent that its handling of the pandemic at home had become shambolic. Burgeoning domestic needs in the fight against COVID-19 and faltering vaccine production at both governmental and private facilities made it impossible to sustain India's commitment to aid countries in its neighborhood and beyond. As the pandemic crisis worsened at home, Prime Minister Modi banned vaccine exports in late March.

This about-face exposed that the Indian government had failed to anticipate a "second wave" of domestic COVID-19 cases. It had made few preparations to increase production of oxygen and other vital medical supplies and had not moved with dispatch to vaccinate vast swaths of its own population. In addition, India's record of producing vaccines swiftly and cheaply made the government over-confident in connection with the pandemic. The country has relied heavily on the capacity of the Serum Institute of India, a large private firm, to deliver vaccines on a significant scale. Despite its remarkable performance in the past, the Serum Institute did not prove adequate against COVID-19. It could not, for example, obtain critical components for vaccine production from abroad and, to make matters worse, a factory fire crippled production.

Caught flat-footed, India resorted to a drastic export ban. This action squandered the goodwill that India had garnered initially with its vaccine diplomacy and undermined the geopolitical objectives such diplomacy supported. Many countries in the neighborhood and around the world were depending on India's ability to supply them with vaccines. Quite abruptly, they found themselves in the lurch.

Back in the Game?

As the Indian government brought the domestic COVID-19 crisis under control, it returned to pressing ahead with vaccine diplomacy. In September, India and the other members of the Quad Alliance pledged to provide over a billion doses of vaccine manufactured in India under an initiative originally announced in March but disrupted during India's COVID-19 crisis. At the summit of the Group of 20 (G20) in late October, Prime Minister Modi offered to deliver five billion doses of vaccine during 2022.

India's participation in the Quad vaccine initiative and its G20 vaccine promise are laudable. If the Indian government can deliver on its commitments, India could help alleviate human suffering worldwide and restore some of the credibility it lost in ending vaccine exports to address its domestic health emergency. Unfortunately, Prime Minister Modi's tragic handling of COVID-19 and his uneven policy record at home and abroad does not inspire much confidence in his return to the global stage or in India's ability to deliver on the commitments it makes.

In addition, during India's COVID-19 crisis, the advantages India once had in avoiding vaccine nationalism and using vaccines for humanitarian and geopolitical purposes have evaporated. As India struggled at home, China continued its vaccine diplomacy, and the United States and other Group of 7 countries pledged to donate billions of doses by the end of 2022. Although still inadequate to achieve global vaccine equity, these efforts meant that India's return to vaccine diplomacy would be additive rather than distinctive. Through the Quad vaccine initiative, India's geopolitical concerns about China became intertwined with U.S. efforts to counter China's growing influence in the Indo-Pacific through vaccine diplomacy, which, to some extent, reduces the autonomy that India values in its foreign policy.

Whether the Indian government will boost spending on health care, sanitation, and preventive medicine remains to be seen

Historically, significant changes in India's foreign policy have only happened in response to endogenous or exogenous shocks. For example, India reappraised its foreign and security policies toward Beijing after the disastrous border war with China in 1962. An unprecedented fiscal crisis in 1991 transformed Indian economic policymaking. Similarly, the pandemic damaged India's economy, causing it to shrink by 23 percent in the third quarter of 2020, and laid bare the country's inadequate health systems and deep inequities in healthcare access. These domestic problems caused India's vaccine diplomacy to stumble badly.

At this juncture, whether these pandemic hard knocks will induce the Indian government to boost spending on health care, sanitation, and preventive medicine and improve its ability to respond to future health challenges remains to be seen. With the worst of the pandemic receding in India, Prime Minister Modi has focused on other pressing foreign and security problems ranging from climate change to the implications for regional security of a Taliban-run Afghanistan. So far, the government has evinced no interest in reassessing its domestic capabilities to cope with another major outbreak of communicable disease. It also has no apparent plans to devote additional resources to its diplomatic corps to better pursue foreign policy goals—including humanitarian assistance—when faced with future pathogenic threats.

Yet, India cannot escape serious health challenges at home and abroad, including the pressure climate change will exert on zoonotic transmission of dangerous microbes. The Indian government cannot afford to be complacent about these challenges indefinitely. Prime Minister Modi and his advisors have strategic reasons to address health threats.

The legitimacy of any Indian government depends on sustaining economic growth, and COVID-19 demonstrated the devastating economic consequences of being unprepared for serious disease events. Prime Minister Modi's desire to nurture cooperation with the United States can stimulate more collaboration between India's pharmaceutical industry and American companies. Doing so would strengthen India's ability to be the "pharmacy of the world" as countries and international organizations seek more pharmaceutical manufacturing capabilities in low- and middle-income countries after the "vaccine apartheid" experienced during COVID-19. Having a more resilient economy, a stronger partnership with the United States, and an enhanced ability to provide vaccines and drugs to countries near and far would bolster the Indian government's interest in countering China's growing influence in South Asia and beyond.

Should Prime Minister Modi pursue this strategic logic, India could well be spared the death, illnesses, economic devastation, tarnishing of its humanitarian tradition, and geopolitical setbacks that its disastrous handling of the pandemic produced.

Šumit Ganguly is a Distinguished Professor of Political Science and holds the Rabindranath Tagore Chair in Indian Cultures and Civilizations at Indiana University, Bloomington.