Go to homepage
The Missing Girls of India: A National Shame
Gender 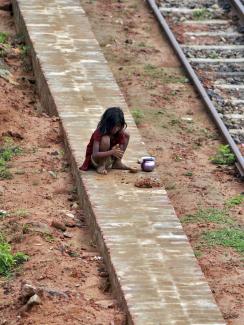 A girl plays with clay next to a railway track in Agartala, India, on May 28, 2015. REUTERS/Jayanta Dey
by Venkatraman Radhakrishnan April 15, 2021

"We don't want any treatment for her," the man said adamantly. "We are taking her home."

I had met him at our hospital in the pediatric cancer ward during my morning rounds with my staff, where that day his 10-year-old daughter, Lakshmi, had been diagnosed with Hodgkin lymphoma, a cancer of the lymph glands. Lakshmi was merrily playing with other children undergoing treatment for cancer in the ward. As the lead oncologist, I beseeched her father, explaining that we could cure his daughter's cancer and that she would lead a normal life. I reassured him that he need not pay for his daughter's treatment and we would provide accommodation, food, and travel expenses free of cost to his family.

But he wasn't convinced. "Don't try to fool me — cancer is a death sentence," he insisted. Even if she were cured, he worried that the stigma of his daughter's diagnosis would remain forever, that society would see her as someone with a disability, just as it perceives women as a liability. "Who will marry her after they know she had cancer?"

Who will marry her after they know she had cancer?

We couldn't stop him. He left, and with him our hopes for the girl. The decision to forgo care was his, but all of us in Indian society were responsible for it.

We Indians worship our goddesses and celebrate their festivals. We associate them with wealth (Lakshmi), power (Shakthi), and knowledge (Saraswathi). And we name our daughters after them — but sadly, we don't give our girls the respect and affection they deserve.

Historically, the sex ratio in India has been skewed against girls. But the 2011 national census found that the child sex ratio in India had reached an all-time low of 914 girls to 1000 boys compared to 940 to 1000 a decade earlier. Where one might expect that ratio to improve with the modernization of Indian society and the embrace of liberal economic policies, the gender disparity seems to have gotten even worse. This daughter deficit is observed across classes, races, regions, and people of different educational statuses and religions. What is driving it, and what can we do about it?

There are several contributing factors, including sex-selective abortion and neglect of and discrimination towards girl children. In the most extreme circumstances, girls may be killed soon after their birth, a practice called female infanticide that has been practiced in India for centuries. But over the last two decades, technological advances like antenatal ultrasound scanning and prenatal genetic testing have made it easier to abort female pregnancies instead. Abortion is legal in India but aborting a fetus after discovering that it is a girl is illegal. In many cases, the mother may have little say in the matter: in India's patriarchal society, the husband, family, and in-laws may exert extreme pressure to terminate the pregnancy. to deter the use of ultrasound scans to make a sex determination before birth, India amended its Pre-Conception and Pre-Natal Diagnostic Techniques Act in 2003—  but the desire to have a male child is so overwhelming that people and doctors collude to continue to do it.

Of girls who needed lifesaving cardiac surgery, only 44 percent received it compared to 70 percent of boys

And biases against female children continue well after birth, including in rates of immunization, medical care-seeking, allocation of household food, school attendance, and the share of household spending they receive. In 1977 the World Health Organization in its Alma Ata declaration declared "Health for all" as the backbone for universal health care, but in India, the philosophy seems to be "Health for boys" rather than girls. Lower-income families, in particular, are more likely to spend on the health-care needs of boys than of girls. One study found that of girls who needed lifesaving cardiac surgery, only 44 percent received it compared to 70 percent of boys. Female children have a 13 percent lower rate of vaccination compared to male children, according to the 2003 National Family Health Survey of India, and the difference was more pronounced in larger households and those with more male children (in a hopeful sign, the 2015 NFHS data found the gap had shrank to 1 percent). A study from the state of West Bengal found that girls there received less medical attention from health professionals compared to boys and families delayed seeking health care for girls three times as long as they did for boys. To treat the same illness, families spent 45 Indian Rupees on girls and 77 Rupees on boys.

And in my field of work, pediatric cancer, we see these same disparities. A study conducted by the non-governmental organization Cankids found that one in three children diagnosed with cancer were female but only one in 13 cancer survivors was female. There is no plausible biological explanation for such an enormous sex disparity in cancer diagnosis and survival: the only plausible explanation is that girls with cancer are not receiving equivalent medical care.

I call the proclivity of Indian society towards the male child a "penis fixation." Changing it will require a wholesale shift in our country's patriarchal mindset, and will not happen overnight. It needs to be tackled at all levels of our society, involving significant stakeholders such as religious leaders, village elders, government, civil society, judiciary, schools, and the public, in order to change the cultural beliefs and practices that constitute gender bias. Education, positive reinforcement through media, and incentives for retaining female children can all play a role. Having observed college-educated mothers standing up for the rights and safety of their daughters, I think college education should be made mandatory and free for all women. To quote Ghanaian intellectual James Emman Kwegyir Aggrey, "You educate a man, you educate an individual. You educate a woman, you educate a nation."  Intergovernmental organizations like the United Nations Children's Fund and non-profits have an important role to play in eradicating this sex bias, through their advocacy efforts.

We also need to reform our institutions, including cultural practices that perpetuate gender bias such as the dowry system, stigma against women studying and working, domestic violence, and rape. Although India has strong laws against these practices, they need to be enforced strictly. Governments should also increase welfare for female children, and make those supportive programs more visible and accessible. The government has recently announced campaigns like one that declared "Save the girl, educate the girl," to provide affirmative action for girls in education and jobs. Over the last decade, I've seen more female children with cancer being brought for treatment, and the major reason for this is the inclusion of cancer treatment in the national health insurance scheme. Parents are less worried about the financial impact of treatment now that the government helps pay for it.

Still, our courts and lawmakers must strengthen our child protection laws and services so that children—particularly female children—are protected from abuse.  I have no legal recourse to stop parents from denying treatment to their daughters. Even if I were to approach the police and courts, it would take me decades to get justice. Unlike in western countries, there is no phone number I can call to summon child protection services to stop discrimination right before my eyes, and I'm more likely to be told to mind my own business.

As I watched Lakshmi leave with her family, my heart sank. Her eyes were pleading with me to make her alright. We as a nation have failed our daughters, which is a national shame, but I also felt personally ashamed that I had contributed to Lakshmi's misfortune. However, I am hopeful that conditions will improve for the millions of Lakshmi's in India and it is on us, the people of the oldest civilization in the world, to give our girls what they truly deserve.

ACKNOWLEDGEMENT: I would like to thank Dr. Stephen Ceccoli, Professor of International Studies, Chair of Political Economy, Rhodes College, and Faculty, Graduate School of biomedical Sciences at St. Jude's Children's Research Hospital, Memphis, Tennessee for his mentorship and guidance in writing this article.

Dr. Venkatraman Radhakrishnan is a professor in medical and pediatric oncology at Cancer Institute (W.I.A.) in Chennai, India.