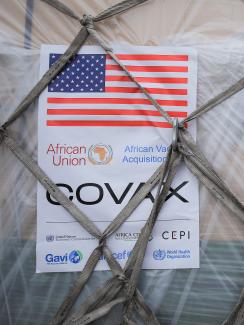 A shipment of Johnson & Johnson's coronavirus disease (COVID-19) vaccines that arrived under the COVAX scheme is seen, at the Bole International Airport in Addis Ababa, Ethiopia, on July 19, 2021. REUTERS/Tiksa Negeri
by Samantha Kiernan and Serena Tohme September 28, 2021

On September 22, world leaders gathered at the virtual Global COVID-19 Summit. The White House pronounced the summit a success, advancing ambitious vaccination goals for 2022 and generating new donation pledges of roughly 600 million doses (500 million of which the United States itself promised, with additional commitments from Australia, the European Union, and Japan). But for many lower-income countries, these promises feel hollow. Past pledges have failed to materialize into delivered doses. Just ten countries are currently responsible for administering three out of every four coronavirus vaccine doses worldwide—a statistic that has hardly improved during the ten months since the approval of the first coronavirus vaccines. In the words of UN Secretary-General António Guterres, "all this is too little too late."

Based on government websites, official statements, COVAX, and media reports, Think Global Health has identified 61 countries that have donated 365 million doses to 148 nations. The first third of this tracker will explore how higher-income countries have followed through on their commitments to donate doses. The tracker will then analyze how donated doses have been distributed, both bilaterally and through COVAX. Finally, the tracker will conclude by looking at specific vaccine donation and diplomacy efforts by leading donors: the United States, China, Japan, and Europe.

As of September 28, higher-income countries have collectively committed to donate 1.97 billion doses around the world. Over 55 percent of these doses—1.1 billion—have been committed by just one nation: the United States. China, Germany, and the United Kingdom follow distantly behind, each having pledged to donate 100 million doses.

Though these pledges are necessary and welcome, 1.97 billion doses are a far cry from the estimated 11 billion needed to vaccinate 70 percent of the world. Furthermore, the speed at which these commitments have been translated into deliveries has been glacial for most donors. Think Global Health has found that just 14.6 percent (or 289 million doses) of the 1.97 billion committed shots have been delivered. At the extremes, China has shipped 50 percent of its promised 100 million doses, while Germany has delivered just 3.6 percent.

In general, European nations have, so far, generally opted to donate funds to COVAX rather than share their purchased doses. While Team Europe (the European Union, Norway, and Iceland) has administered 561 million doses at home, these nations have collectively delivered just 33.8 million doses, or 6.8 percent of their total pledge of 500 million doses. The United Kingdom has hardly performed better, shipping just 8.4 percent of its promised doses. To put this European effort in perspective, the UAE—a country with a population of just 9 million people—has delivered more doses (3.2 million) than all but four European nations. Furthermore, no European country, has delivered more doses than India, which shipped its last donation on April 22 before banning all vaccine exports.

Though the exact reasons for donations delays are not clear, a focus on first reaching full domestic coverage, pursuit of booster shots, and legal and transportation hurdles could have all had spoiling effects. Unless higher-income donors, particularly European countries, can translate their promises into tangible doses, actual donations will remain woefully insufficient to meet global demand.

Today, 61 countries have donated 365 million doses to 148 nations, of which 289 million have been delivered. Due to the efforts of Western donors, more than two-thirds of these doses are now going through COVAX. In theory, distributing donations through COVAX should make donations more likely to advance global equity or provide relief to those most in need, rather than be distributed in a manner that cements donors’ traditional spheres of influence, as occurred with bilateral donations earlier in the pandemic.

However, when making vaccine commitments, many donors have earmarked their COVAX contributions to go to specific countries or regions. France, for instance, intends its 120 million doses to go, primarily, to Africa. Meanwhile, Portugal is prioritizing Portuguese-speaking nations, and Spain has tagged most of its doses for Latin America. Similarly, the United States released its own allocation plans for donations through COVAX.

These earmarked donations are not inherently inequitable. If donors coordinated their efforts to ensure global coverage, countries could still pursue an equitable approach to vaccine donations overall, even while advancing their national interest. But so far, that has not been the case.

One method of equitably distributing vaccines is according to population size. The World Health Organization, for instance, has called for the distribution of doses to cover 40 percent of each nation by the end of 2022. However, many small nations, particularly in the Caribbean and Pacific, have received enough donations to vaccinate their entire population. In contrast, more populous recipient countries, such as the Democratic Republic of Congo, Nigeria, and Venezuela, have received enough donations to fully protect no more than 2 percent of their populations.

Conversely, some countries have received sizable donations regardless of whether their domestic governments have already secured and administered a high number of doses. For instance, Canada, South Korea, and Cambodia all received donations of 500,000 or more doses, despite having vaccinated more than half of their populations. At the other extreme, Haiti and South Sudan have each received total donations of 500,000 doses or fewer, despite having vaccinated less than 1 percent of their populations.

Donations have also not been going to the nations with the highest current or projected COVID-19 case burdens. Instead, Asian and Pacific countries are receiving 50 percent of all donated doses, despite accounting for just 22 percent of total global cases since November 2020. In fact, of the top ten recipients of donations, eight are in Asia: Indonesia, Bangladesh, Vietnam, Pakistan, Philippines, Cambodia, Afghanistan, and Nepal. Just two—Mexico and South Africa—are not. Sub-Saharan African nations have received donations disproportionate to their current case burden, but the region also faces the world's lowest vaccination rates. In contrast, Latin America, non-EU nations in Eastern and Central Europe, and Central Asia continue to receive fewer donations than a need- or risk-based approach to donation would suggest.

The Donors: Cementing Spheres of Influence

If donors are not distributing COVID-19 vaccines solely according to need or equity, what is driving donations? Despite claims by donor governments that their donations are apolitical, donation patterns by the four largest donors, the United States, China, Europe, and Japan, suggest donated doses are still being used for strategic purposes.

U.S. officials have stressed that their donations come without strings attached and are primarily intended to increase global coverage. To their credit, U.S. officials have prioritized Latin American and African nations to a greater extent than other donor nations, providing doses to 65 countries across the regions. The relative volume of doses allocated among those countries, however, has not always accorded to the population size, case burden, vaccines already administered, and projected risk.

Washington has donated 44 percent of all its donated doses to just 19 countries in Asia, mirroring President Joe Biden's strategic focus on the Indo-Pacific. There, the largest donations have gone to countries where the United States is battling with China for influence: Bangladesh, Indonesia, Pakistan, the Philippines, and Vietnam. In a few instances, U.S. doses have been more explicitly linked to political decisions. The United States, for example, delivered 10.3 million doses to Pakistan—the largest recipient of U.S. vaccine donations—just weeks after pulling out of neighboring Afghanistan. The Philippines' President Rodrigo Duterte outright claimed U.S. doses convinced him not to cancel the U.S.-Philippines Visiting Forces Agreement.

China, second only to the United States, has earmarked 67.8 million doses for 93 countries, of which 49.5 million doses have been delivered.

Like Washington, Beijing has rejected all claims that it is using vaccines to advance national interests or to compete with geopolitical rivals. However, China has provided 67 percent of all its donations to countries in Asia. All but six of the 93 nations to which China has pledged doses are participants in its Belt and Road Initiative (BRI), an ambitious global infrastructure project that aims to increase Chinese influence. Beijing has even launched a dedicated initiative to promote vaccine cooperation, sharing, and production between BRI members.

Beyond the BRI, another potential motivation for Chinese donations is ensuring or incentivizing support for Beijing's positions on Hong Kong, Taiwan, Tibet, and Xinjiang. China, for instance, attempted to wield vaccines to enforce its One China principle—or the stance that Taiwan is an inalienable part of China—in Guyana and Paraguay. Similarly, Western diplomats alleged that China threatened to withhold vaccines from Ukraine unless it withdrew support for investigation of human rights abuses in Xinjiang.

Though the European Union has presented its vaccine diplomacy efforts as a united front, individual EU countries have taken vastly different approaches to vaccine donation and diplomacy. Many EU donations have been guided by geographic proximity—Austria, Bulgaria, and Lithuania, for example, have largely focused on Eastern Europe. Other countries, such as Portugal, Spain, and France, have moved doses first to former colonies. As a bloc, the European Union has notably not prioritized Asia.

The bloc's two largest donors, France and Germany, have similar donation patterns. Both countries have committed to ensuring global vaccine equity, donated through COVAX, and have generally prioritized Africa over Latin America. The starkest difference between the two lies in delivery of doses; France has pledged 9.8 million donated doses and delivered 7.1 million, while Germany has pledged donations of 12.6 million doses, but delivered just 3.6 million. Interestingly, the single largest donations from France and Germany have both gone to Southeast Asian countries—Indonesia and Vietnam, respectively—middle-income nations that have also received significant donations from other donors.

Like other large vaccine donors, Japan has rejected the use of vaccines as a "diplomacy method." However, unlike other major donors, Japan has not taken a global approach to vaccine donations. Tokyo has directed 89 percent of its donated doses to a single region (Asia and the Pacific), and donated doses to just one country outside of that region: Iran. Even through COVAX, Japanese donations are going almost exclusively to Asia. Similar to the United States, Japan is prioritizing countries in Asia where it is battling with China for influence, such as Bangladesh and Vietnam. Notably, the top recipient of Japanese vaccines is Taiwan.

Vaccine donations remain an essential tool for narrowing the gap between vaccine haves and have-nots. However, donor countries have been both slow to deliver on their pledges of donated vaccines and reluctant to distribute them according to need. Donating through COVAX has not fundamentally changed the politics of vaccine donations either. Rather than advance global equity or provide relief to those most in need, donations continue to cement donors’ traditional spheres of influence.

EDITOR'S NOTE: The authors would like to thank Thomas J. Bollyky, as well as Bayan Galal and Kailey Shanks for their work on data gathering for previous iterations of this tracker.