The pandemic, Modi, and what's next for the world's largest democracy 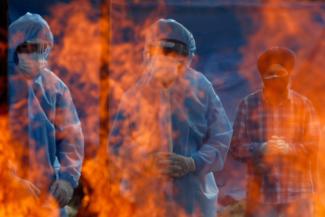 Relatives stand next to the burning pyre of a man who died from the coronavirus disease (COVID-19) during his cremation in Srinagar, India, on May 25, 2021. REUTERS/Danish Ismail
by Kapil Komireddi August 16, 2021

The horrific second wave of the coronavirus has done more than claim lives in India. It has dislodged the idea—fostered for nearly three decades by the country's governing elites—of India as a super power in waiting. The world's largest democracy, already institutionally enervated after seven years of illiberal rule by Prime Minister Narendra Modi, is now emerging unsteadily out of the worst humanitarian calamity since the country's partition in 1947. But recovery from the experience of this past April and May—when a state equipped with nuclear weapons and a sophisticated space program could not distribute oxygen to dying coronavirus patients—may perhaps take decades.

The COVID-19 plague simultaneously democratized tragedy for Indians—even privileged Indians found themselves pleading for hospital beds and foraging for wood to cremate their dead—and spawned fresh authoritarian possibilities for the Modi government.

The first wave of the virus came to India last year, and became Modi's savior. Before the prime minister announced the largest lockdown in history, in March 2020, with a four-hour notice, he was swamped by a series of self-engineered crises. Indian cities were awash with protests against Modi's attempt to subvert the county's secular foundations via an amendment to its citizenship law. In February 2020, Delhi endured the worst sectarian violence in more than three decades. Unemployment was soaring. And the economy was poised to register the slowest pace of growth in a decade. Modi, overwhelmed by these setbacks, appeared vulnerable for the first time since his election as prime minister in 2014. Then arrived his deus ex machina in the form of a contagion.

The prime minister did not at first notice the opportunity to halt the protests by invoking the danger from the virus. In February, as the pathogen claimed lives in China and Southeast Asia, Modi hosted a spectacular rally for President Donald Trump. Weeks later, he devoted his energies to toppling the government of Madhya Pradesh, the central Indian state then governed by the opposition Congress Party. In all this time, as casualties mounted in Europe and other parts of Asia, the government did little to prepare India. In mid-March 2020, there was only one isolation bed for every 84,000 people in India, one doctor for every 11,600 patients, and one hospital bed for every 1,826 Indians. The first orders for personal protective equipment for front-line health-care workers were made just hours before Modi went on television, at eight o'clock in the evening on March 24, 2020, to announce a total lockdown. One of the most consequential speeches in Indian history, it became clear the following day, had almost entirely been an improvised effort. Virtually no thought or consultation had preceded it, and there was no plan for what to do once the lockdown was imposed.

The first budgetary allocation for all of India's emergency health-care needs—$2 billion, or roughly $1.50 for every Indian—was made nearly two months after the first infection was detected in the country. And the economic stimulus and relief package promised by Modi, arriving late, was the smallest of all the big economies in the world: $22.6 billion—less than 1 percent of India's gross domestic product—more or less the same amount earmarked by the prime minister to remodel the seat of government in New Delhi.

Some 45 million migrant workers—indigent men and women from the countryside who serve the needs of wealthier Indians as chauffeurs, servants, cleaners, cooks, and construction hands—figured nowhere in the government's plans in the immediate aftermath of the lockdown. A survey conducted nearly a month after the country was curfewed found that 96 percent of all migrant workers had not received rations, and 90 percent had not been paid their wages. By mid-April of 2020, some 200 people had died as a consequence of the lockdown, many dropping dead of illness and exhaustion as they fled the cities for their villages by foot or on crowded trains and buses.

This was the warmup act. In the weeks that followed, police departments across India began seriously harassing journalists. In Kashmir, cases were filed under an oppressive piece of anti-terrorism legislation against Gowhar Geelani, the author of Kashmir: Rage and Reason, for "indulging in unlawful activities" by posting on social media content "prejudicial to the national integrity, sovereignty, and security of India," as well as Masrat Zahra, an internationally acclaimed photojournalist, for publishing "anti-national posts" on her Facebook page. In New Delhi, the journalist Siddharth Varadarajan was summoned to appear at a police station 435 miles from his home at the height of the lockdown because a quote in an article in the Wire, the independent publication he edits, had briefly been misattributed to the chief minister of Uttar Pradesh. The mistake had been corrected almost instantly. Additionally, police across the country lodged cases or opened investigations against dozens of other journalists.

The experience of 2020 was eclipsed, at least briefly, by the optimism that accompanied the dawn of 2021. The first shot of vaccine against COVID-19 was administered in India on January 16. By then, more than 2.3 million citizens of the United Kingdom had received a dose, and the United States was inoculating over a million people a day. The Indian government appeared relaxed despite lagging badly behind. There was, it insisted, no cause for panic. India, after all, had tremendous experience staging mass vaccination drives, the expertise to replicate past successes, a domestically-made vaccine coming, and the largest private vaccine-making industry in the world.

All of these facts were deployed by the government to coax Indians into the belief that India had prevailed against the virus. When Modi told the World Economic Forum on January 28, 2021, that he had saved "humanity from a big disaster by containing coronavirus effectively," it did not provoke a backlash. By February, the prime minister's party was applauding Modi's "leadership for introducing India to the world as a proud and victorious nation in the fight against COVID-19." Weeks later, the government allowed the world's largest religious gathering to be brought forward by a year in deference to lobbying by Hindu priests. More than 3 million pilgrims took a communal dip in the Ganges River in the holy city of Haridwar on a single day in April. And less than a week later, as India's reported daily new infections surged past 230,000, Modi, hectically campaigning in state elections, told a large gathering of supporters that he had "never seen such crowds at a rally."

Days later, India was deluged by the second wave of the coronavirus. It was only as Indians suffocated outside hospitals in the country's capital that the full extent of the government's failure to prepare the country for the resurgence of the virus became apparent. A parliamentary panel's warning in November 2020 to stockpile oxygen had not been heeded. And rather than procure vaccines to meet the domestic demand, the government had exported them. New Delhi ordered only 35 million doses of the vaccine for all of India by the end of March; yet it shipped out, by mid-April, 60 million doses, of which 10 million were gifts to other countries. India's needs were subordinated to the urgent task of rehabilitating the prime minister's bruised global image after months of bad international headlines about the consequences of his lockdowns.

"Many countries, when they think vaccines, they think India," an advisor to India's foreign ministry had boasted to the Wall Street Journal in February.

The catastrophic consequences of Modi's failure to plan—and his predecessors' failure to invest in health care as well—are not confined to India alone. Other nations are also paying the price. The Serum Institute of India, the largest private vaccine manufacturer in the world, had contracted to deliver a billion doses of the Oxford-AstraZeneca vaccine to other low- and middle-income countries. This past April, the Indian government was forced to make up for overlooking local requirements in the months leading up to the second wave. Its decision to ban exports of the vaccine from India left developing nations from Africa to Asia in the lurch, and damaged their trust in India.

Modi, absent from public view in recent months as COVID decimated the country, is now attempting to restore his reputation. In July, he sacked the health minister—who this past March had assured the world that India was in the "endgame of the pandemic"— reorganized his cabinet, and created a ministry of "cooperation" to make government more efficient.

A senior civil servant in Delhi likened the exercise to the "captain of the Titanic rearranging the deck chairs." And by Titanic, the civil servant did not mean Modi's government. He meant India. The damage runs so deep that, even if Modi were to quit tomorrow, his successors would struggle to repair it.

Consider the numbers. A recent study found that nearly 68 percent of India’s population above the age of six has COVID antibodies; the majority, 62 percent, has not been vaccinated. As of August, more than three million Indians have perished in the pandemic. And three decades after India liberalized its economy, the size of its middle class, according to Pew, has shrunk during this crisis by 32 million, while the number of its poor—people who earn less than the equivalent of $2 a day—has increased by 75 million. Rural unemployment was at 14.34 percent by May of this year. Urban unemployment is almost 15 percent. More than a million children have been orphaned by the pandemic. And young Indians with means are again contemplating a flight from the country. The prospects of a generation have been wiped out. On the other side of the ledger, some of the very rich have grown richer over the course of the pandemic. Gautam Adani—the tycoon from Gujarat closely associated with Modi—added more than $16 billion to his wealth this year.

"The future of the prime minister is beside the point now," the civil servant said to me. India's great challenge now will be navigating the wreckage of Modi's time in office.

Kapil Komireddi is the author of Malevolent Republic: A Short History of the New India.