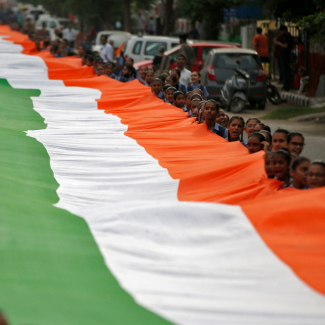 The world has yet to recover from the COVID-19 pandemic, but we find ourselves at the precipice of another global public health emergency: monkeypox.

A zoonotic viral disease, monkeypox gets its name from the fact that it can be transmitted from animals—including monkeys, squirrels, and rodents—to humans through direct contact with blood, body fluids, and the lesions of a diseased animal. Now, human-to-human transmission is on the upswing across the globe. And India, a nation of 1.38 billion still grappling with the ravages of COVID-19, has not been spared. But the country is working to prepare should its case count grow.

In July, India reported its first case of monkeypox in a man with a travel history, making it the first documented case in the Southeast Asian region

Long endemic to certain Central and West African countries—until 2000, the Democratic Republic of Congo, Nigeria, and the Central African Republic had a major monkeypox case burden—the United States, the United Kingdom, Singapore, and Israel have also seen cases during the past two decades. But in 2022, global cases have multiplied quickly, with about 30,000 cases of monkeypox in more than 89 countries to date.

On July 14, India reported its first case of monkeypox—in a 35-year-old man with a travel history from the United Arab Emirates (UAE) to Kerala—making it the first documented case in the Southeast Asian region. Over the past month, cases in India have continued to inch up. As of August 8, 2022, the country reported nine confirmed cases of monkeypox, five from Kerala, in the southwest of India, and four from Delhi, more than 2,600 kilometers to the north. The Indian Council on Medical Research (ICMR) isolated the virus strain A.2 from the first two reported cases, and it is different from the one that's affecting people in the European Union.

Five cases are linked to international travel. Diwakar Kulkarni, former director and principal scientist at the Indian Council of Agricultural Research - National Institute of High Security Animal Diseases (ICAR-NIHSAD), in Bhopal, said, "The isolated cases of monkeypox reported in Delhi with no prior travel history emphasize the importance of tracing the source of the infection, perhaps transmission through rodent population."

Human-to-human monkeypox spread can occur through contact with respiratory droplets, skin lesions, dry scabs, fomites, and sexual contact. Transmission from an infected mother to her fetus can also take place. It tends to be less severe than smallpox, with an incubation period of 6 to 13 days (but up to as many as 21 days) and symptoms that can last for 2 to 4 weeks. It typically causes fever with a rash but its distinguishing feature from smallpox, measles, and chickenpox is the presence of lymph node swelling and its distinctive rash. The current case fatality ratio ranges from 3 to 6 percent but it may go up to 11 percent, and it can be higher among children. Monkeypox diagnosis is conducted through polymerase chain reaction (PCR) tests from skin samples.

All but one of the monkeypox cases in India have been in males (in the 2022 outbreak, globally, 98 percent of monkeypox cases were among males). The 31-year-old female had traveled from Nigeria to India. Apart from these, a 7-year-old boy admitted to a Kerala hospital with a recent travel history from the United Kingdom, is suspected of having monkeypox, making him the country's potential pediatric case. India has also reported one death, a 22-year-old man in the state of Kerala who had traveled from the UAE.

Cessation of smallpox vaccine, growing trade and mobility, encroachment of forest land, viral adaptation to a human host, and climate change are some of the reasons suspected for monkeypox outbreaks in non-endemic countries.

In India, the Ministry of Health and Family Welfare (MoHFW) released guidelines for monkeypox management right after the first case report in India (however, the guidelines seem to have been drafted before the first case). They cover epidemiology, case definition, clinical features, diagnosis, patient management, contact tracing and surveillance strategies, risk communication, and preventive measures along with an advisory for international passengers noted that a presence of a single detected case in the country will be considered an outbreak. Various epidemiological studies involving previous outbreaks of monkeypox have established that children, pregnant women, and immunocompromised individuals are at a higher risk of acquiring the disease and are more likely to suffer severe complications. The guidelines discuss the higher case fatality ratio among children compared to adults and recommend that preschool children be excused from group settings. The guidelines specifically note that pregnant women and immunocompromised people are vulnerable people who should avoid contact with probable cases. However, no specific attention is provided to the geriatric group or to those with HIV.

India's patient management guidelines entail isolation, masking, protection of skin lesions and mucosal membranes (including ulcers and conjunctivitis), rehydration therapy with nutritional supplements, and symptom alleviation for fever, itching, nausea, vomiting, headaches, and more. While antibiotic treatment is suggested for secondary infections related to skin rashes, the guidelines do not provide any information on the use of antivirals or prophylaxis. The guidelines consider destigmatization as part of effective risk communication in the context of gay, bisexual, and men who have sex with men (GBMSM). They also recognize the risks that the disease poses for health-care professionals. In addition, according to experts, the epidemiology of monkeypox is quite different from COVID-19, the spread is slow and the most vulnerable people are the close contacts of the infected person.

Kulkarni said, "even though the outbreak might spread slowly, there is a need to get ahead of the situation and sensitize the public about the disease and prevent the spread of misinformation in the community."

In India, the Ministry of Health and Family Welfare released guidelines for monkeypox management right after the first case report in India

Beyond the guidelines, as part of preparedness, the Indian Council Medical Research - National Institute of Virology (ICMR-NIV) has trained fifteen geographically spread out and strategically placed viral research and diagnostic labs in the country for monkeypox detection. The central (federal) government has also reached out to the state authorities communicating the need for orientation and reorientation of stakeholders for various items mentioned in the guidelines as monkeypox global spread evolves, screening, testing and patient isolation, risk communication targeted at health-care professionals and the general public, and scale-up of hospital resources and services managing probable or confirmed monkeypox cases.

Monkeypox spread comes at a time for the Indian people when the country, including its economy and health-care system, are just beginning to recover from lapses brought on by COVID-19. India reported the deaths of more than a thousand health-care professionals due to COVID-19. However, estimates suggest that the actual number might be double that. Beyond deaths, the morbidity due to infections and long-COVID, burnout, stigmatization, and pandemic-related violence further damaged the backbone of the health-care system in a country that faces a shortage of more than 12 million HCPs. Monkeypox could push India's already fractured system to its limits. However, limited data suggest that the risk of disease transmission among health-care professionals in well-resourced hospitals is low and that monkeypox vaccination for health-care professionals who are involved with the collection and transport of samples, diagnostics, public health response, patient care, and other monkeypox-related teams could be beneficial. The monkeypox management guidelines put forward by the MoHFW in India provide specific indications for safe patient handling and isolation, precautionary hygiene, and use of personal protective equipment for health-care professionals.

In the broader population, several social determinants of health could be instrumental in monkeypox spread and subsequent disease management. The MoHFW guidelines point to no known natural reservoirs of monkeypox in India, but cite some common rodent species that might be susceptible to the virus in the future. Expanding upon previous yet limited research from regions endemic for monkeypox, India could be at risk for increased spread. Its high population density, known household crowding, issues in household hygiene, and lack of access to clean water and sanitation facilities could be major risk factors for the disease spread, especially in urban areas with predominantly poor households. Historically, monkeypox spread has been linked to poverty and poverty vulnerability posing a more significant threat to socioeconomically vulnerable populations spread across both rural and urban area. Rural areas, along with parts of semi-urban regions, where households own livestock and are in closer contact with animals, could be at higher risk of exposure if animal reservoirs arise in India. Limited health care access, including screening and diagnostic challenges, could make rural Indians more vulnerable to the disproportionate burden of adverse disease outcomes. Beyond socioeconomic and geographic vulnerabilities, demographic groups such as GBMSM and sex workers face dangers of disease spread and stigmatization.

Where India Stands on Monkeypox Vaccines

The United States has approved JYNNEOS, a two-dose vaccine against monkeypox, and is building its stockpile. The National Institute of Virology head has expressed that there is no need for India to stockpile vaccines for monkeypox as WHO has not recommended mass vaccination yet. The ICMR has issued an expression of interest to experienced vaccine manufacturers and pharmaceutical companies to collaborate on developing vaccines from the isolated monkeypox virus strains. Using smallpox vaccines has been a suggested avenue for prevention since, in previous monkeypox outbreaks, infections mostly occurred in individuals who were not vaccinated against smallpox, with attack rates (rates of infection among people at risk in a specified time interval) higher in unvaccinated people compared to vaccinated people. However, given the large population and budgetary as well as feasibility constraints, the vaccination model may not be suitable for India. Rather, early preparedness should involve investing in awareness, effective surveillance, hospital infection control, contact tracing and isolation, scale-up of screening, decentralization of lab-based diagnostic services, and initiating clinical management protocols in tertiary, especially medical college hospitals.

Climate change plays an important role in the emergence of infectious diseases in unexposed places. A modeling study conducted for monkeypox cases in Central Africa showed that rampant deforestation and changing climate could potentially increase the chances of animal-to-human transmission of monkeypox.

India has a high burden of rabies, toxoplasmosis, brucellosis, leptospirosis, and scrub typhus constituting a majority of climate-sensitive zoonotic diseases. The changing climate in India makes various parts of the country vulnerable to monkeypox. The National Center for Disease Control in India has published a detailed health adaptation plan for climate-sensitive zoonotic diseases stressing the "One Health" approach based on the rationale that human health is intertwined with animal health and the environment. The One Health action plan prescribes support from various stakeholders including ICAR, departments of the meteorological department, veterinary, urban planning, and forest and environment for public health action against zoonotic diseases. The monkeypox outbreak in India adds to the necessity of this plan.

Aatmika Nair is a medical officer at the District Tuberculosis Centre under the Mumbai District TB Control Society, in Maharashtra, India. She is a researcher at the Association for Socially Applicable Research (ASAR), a non-governmental, not-for-profit think tank and advocacy group in Pune, Maharashtra, India.


Siddhesh Zadey is a researcher in the Department of Surgery at Duke University School of Medicine in Durham, North Carolina, and a co-founder of the Association for Socially Applicable Research (ASAR).