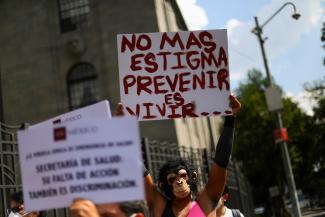 An activist holds a sign that reads, “No more stigma, preventing is living" during a protest to call for a stronger response to the monkeypox crisis in Mexico City, Mexico, on July 26, 2022. REUTERS/Edgard Garrido
by Marcelo Agudo Pujol August 9, 2022

Monkeypox has hit the LGBTQ+ community hard. Health officials around the world have struggled to raise awareness about the virus for fear of stigmatizing LGBTQ+ people and are divided over whether to refer to monkeypox as a sexually transmitted disease (STD). In the meantime, gay and bisexual men have had to navigate the risks of monkeypox exposure largely on their own.

Global case counts now hover around 26,000 and infections have cropped up in 80 countries. On July 27, 2022, the World Health Organization (WHO) recommended that gay and bisexual men limit their number of sexual partners to protect themselves from monkeypox and help slow transmission. According to the Centers for Disease Control and Prevention (CDC), more than 98 percent of confirmed cases as of July 26, 2022, had involved male-to-male sexual contact. As early as May, epidemiologists were reporting that initial cases of the outbreak were being identified almost exclusively among men who have sex with men (MSM). But public health messaging on monkeypox and its spread in the LGBTQ+ community has been extremely inconsistent. Linking monkeypox to sexual transmission would equip gay and bisexual men with the health information they need to protect themselves.

According to some reports, the virus is well on its way to becoming an endemic STD in the United States and Europe. Because sexual contact is not the only mode of transmission, other reports have avoided the designation, or even labeled it a myth or dangerous misinformation.

The virus has been endemic to parts of central and west Africa—and largely ignored outside the region—since the 1970s, typically transmitting via animal-to-human contact, such as by hunting and processing infected animals, and self-limited outbreaks within a household. The current outbreak, however, is primarily spread human-to-human through direct contact with infectious sores, scabs, or body fluids, along with respiratory secretions during prolonged, face-to-face contact. Unwashed clothing and linens that have previously touched the infectious rash can also transmit the virus.

Scientists do not yet know enough to determine if the virus can be spread via semen or vaginal fluids, yet evidence exists that the virus DNA is found in semen. Some experts posit that, although sex is a perfect conduit for monkeypox to move, the virus is not exclusively spread through sexual activity and therefore deeming it an STD would be misleading. That is, monkeypox is not a sexually transmitted disease but it is a disease that can be sexually transmitted. However, the same is true for some common STDs such as herpes, human papillomavirus (HPV), and syphilis, which are not exclusively transmittable through sexual behavior but can also be spread through skin-to-skin contact.

The recent WHO guidance targeted to MSM put the agency at odds with health officials and activists who have insisted on a sex-positive approach—or one that avoids asking people to change their sexual behavior—to combat the virus. There is concern that monkeypox messaging centered on the risks of sex between men could fuel the blaming of the outbreak on the sexual behavior of gay men, rather than the testing, vaccine procurement, and treatment failures allowing the virus to go unchecked. A small number of cases among children have recently been identified, but almost all are close household contacts of adult cases. Some advocates fear that if the outbreak spreads well beyond MSM sexual networks, far-right conspiracy theorists could exploit sex-focused messaging to push baseless "groomer" narratives that falsely equate being LGBTQ+ with a predilection for pedophilia.

In addition to concerns of anti-LGBTQ+ discrimination, a large reluctance to label monkeypox an STD stems from the worry that doing so could lead people outside of MSM sexual networks to think that the disease poses no risk to them. Such was the case in the early days of the AIDS epidemic, when popular misconceptions of HIV as a "gay disease" allowed the virus to spread beyond MSM. Similarly, in 2008, a methicillin-resistant staphylococcus aureus (MRSA) outbreak was mischaracterized as "spreading rapidly" in the gay communities of San Francisco and Boston, with some media outlets dubbing it "the new HIV"—despite the fact that the MRSA strain was already being transmitted among the general population via asexual contact through sports and in locker rooms. Instead, gay men were singled out as the perpetuators of a deadly disease outbreak.

Conversely, underplaying the risk of sexual transmission from monkeypox could inadvertently overplay the risk from other modes of exposure, directing resources away from those who need them most and likely propagating the very stigma health officials have sought to avoid via unfounded fears of contagion from gay and bisexual men. Reports that monkeypox could be spread through aerosols—similar to the coronavirus—led the CDC to issue a statement clarifying that the virus does not spread through casual conversation, touching doorknobs, or sitting next to someone infected on a flight.

The insistence that anyone can get monkeypox or that this virus impacts everyone equally has resulted in confusion and anxiety over the risk posed to the broader population, with some people questioning why U.S. vaccine access is currently limited to MSM and close contacts of those infected—even though vaccine demand already drastically exceeds supply. Low positivity rates among women and children indicate that cases beyond MSM aren't simply being overlooked. The European Center for Disease Prevention and Control has stated that the chance of monkeypox spreading among the broader population is very low.

While anyone can get monkeypox, the likelihood of infection should be regarded in framing the risks of transmission. Otherwise, such messaging does not fight stigma—it perpetuates misinformation. Full resources should be directed at the community that is currently being affected, rather than stirring unnecessary worries about what might one day come to pass. An aggressive response now, as the window for controlling the epidemic quickly closes, could preclude a drawn-out and further uncontained outbreak.

Stigma harms public health: it discourages people from getting tested and seeking treatment and makes it harder to trace new cases and effectively control a disease. But censoring the messaging around monkeypox for fear of giving ammunition to anti-LGBTQ+ voices will not help LGBTQ+ people. Honest analysis of the current risk associated with casual sexual encounters in a community facing an outbreak does not stigmatize gay sex in and of itself. Likewise, a sex-positive response is not one that falsely suggests people can reduce the risk of having sex with someone already infected by merely covering sores or avoiding kissing.

Indeed, a growing chorus of activists who previously pushed for sex-positive messaging have recently changed course and called for curbing sexual behavior among gay and bisexual men. Historically, abstinence-only HIV prevention programs have been ineffective at changing individual behavior or reducing HIV risk, but pushing prolonged abstinence or monogamy is quite different from promoting short-term reduction in sexual activity or temporarily reducing one's number of sexual partners. Of course, as the COVID-19 pandemic continues to upend lives around the world, the specter of March 2020 hangs over any discussion of temporary measures to combat a virus.

More broadly, efforts to stem stigma, as well as the reluctance to associate monkeypox with STDs, can translate instead into an unwillingness to comprehensively talk about sexual health, gay or straight. The fumbled virus response highlights the limited sexual health services and strained funding for diagnosis, treatment, and contact tracing across the United States in the face of a growing STD crisis. These same sexual health clinics are on the front lines of the current outbreak; they are where most testing has been taking place. Importantly, they are also staffed by professionals who know how to talk about and care for gay men's sexual health.

Sexually transmitted or sexually transmittable, monkeypox shares the same obstacles to detection and treatment as other STDs. Health officials should integrate their efforts and messaging around monkeypox within the broader program for sexual health, which also desperately needs more funding and resources. Increasing the availability of sexual health clinics would lower barriers to testing and care. Frank (and positive) messaging on sex, rather than tiptoeing around the subject, will be the first step to curb the rapid spread of the virus and protect those who are most at risk.

Marcelo Agudo Pujol is senior editor at the Council on Foreign Relations.

Writing a More Inclusive Playbook: How COVID-19 Is Impacting LGBTQ+ Communities Around the World