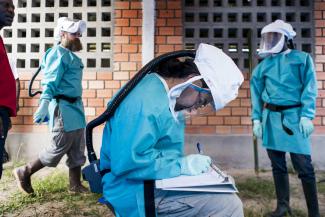 CDC biologists and a Congolese scientist examine animals caught in the jungle that may carry the monkeypox virus, in Manfuette, Republic of Congo, on August 29, 2017. Melina Mara/The Washington Post via Getty Images
by Lillian Posner and Isabella Turilli December 2, 2022

The first human case of monkeypox—a rare zoonotic virus that can transmit from animals to people—was recorded in the Democratic Republic of Congo in 1970. Since then, the disease has become endemic in parts of West Africa, although outbreaks have been known to occur in other places, such as the United States in 2003 and now in over 60 non-endemic countries. This timeline is a running account, gathered in real-time, of key events in the 2022 outbreak as they unfold. We will be updating this timeline frequently as new developments are reported. You can access all of Think Global Health's monkeypox coverage here.

Week of October 7 to October 13: Ireland to Open Vaccination Centers; United States and Democratic Republic of the Congo Collaborating on Clinical Trial

Week of September 9 to September 15: Still No Vaccines for Africa; Community Vaccine Outreach in the United States; New Study on How Monkeypox Affects Brain Health

Week of August 26 to September 1: First Monkeypox Death in United States; Very Few in U.S Have Received Full Course of the Monkeypox Vaccine

Week of August 19 to August 25: Vaccine Tourism in Europe; WHO Reports Decline in Global Cases; Bavarian Nordic to Boost Production

Week of July 2 to July 8: WHO Revisits Earlier Decision About Whether Monkeypox Constitutes a Public Health Emergency After Two Deaths in Africa; United States Expands Testing and Vaccination

Week of June 25 to July 1: United States Begins Vaccine Rollout as the WHO Determines Monkeypox is Not a Public Health Emergency

Week of May 27 to June 1: Monkeypox Reaches Latin America; United Kingdom Issues Its First Monkeypox Vaccines; One Death in Nigeria

Week of May 20 to May 26: Wealthy Nations Begin Exploring Testing and Vaccination Options as More Countries Report Cases and in Larger Numbers

Week of May 12 to May 19: Monkeypox Cases Recorded in United Kingdom, Portugal, Italy, and Canada

Week of May 7 to May 11: Monkeypox First Identified in a Non-Endemic Country


Isabella Turilli is a research associate for global health, economics, and development at the Council on Foreign Relations (CFR). She has also served extensively as an Emergency Medical Technician (EMT) in the District of Columbia, and worked as an EMT instructor and quality improvement officer with Georgetown EMS and the DC Department of Health.