Go to homepage
Coronavirus, War, and Yemen in Between: A Recipe for Disaster
Migration 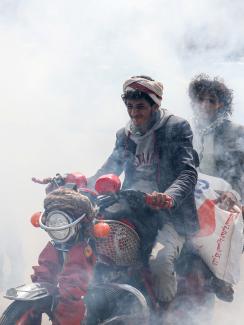 People ride a motorbike amidst smoke from fumigation during a fumigation campaign while the spread of the coronavirus disease (COVID-19) continues, on the outskirts of Sanaa, Yemen, on April 13, 2020. REUTERS/Khaled Abdullah
by Walid A. Al-Soneidar and Nezar N. Al-Hebshi May 1, 2020

Yemen, once called Arabia Felix, or the happy land of Arabia, has been reeling for the past five years under a brutal war that destroyed most of its fragile infrastructure. War started after a failed power transition following the Arab Spring revolutions that swept many countries in the region in 2011. The direct and indirect ramifications of political instability for decades, followed by the ongoing war, led to the tragedy in Yemen that has been described as the worst humanitarian disaster in the world. We will leave reasons and explanations about the complexity of the war for politicians and historians to make, but the salient point in the coronavirus pandemic is that the deprivations of war have left the country with one of the most vulnerable populations in the world.

On April 10, 2020, Yemen’s government announced the first confirmed case of COVID-19. However, given the war-torn country's limited testing capability and lack of proper medical and laboratory facilities, the actual number of cases may be much higher. Under such circumstances, Yemen's patient zero may never be known. What is really at stake here is that while a disaster is looming on the horizon, many countries are overwhelmed with their own problems and few are willing to help. The fear is that COVID-19 will spread through Yemen like fire in a hay field with unimaginable cost to human life.

The reasons for such a dire prediction are many. Although rich with natural resources, Yemen is currently the poorest country in the Arab world with an underdeveloped economy that depends on foreign aid for almost every aspect of life. In 2017, the UN estimated that half of Yemen’s health-care facilities were not operating. Three years later, the fighting got worse and the number of open facilities has fallen even more.

Many hospitals in the country have been bombed over the past few years, even those run by international organizations such as Doctors Without Borders. In addition to a lack of basic medical equipment and training of local health-care workers, many medical professionals have fled the country and immigrated elsewhere. There is no better example of the cost of war from a public health perspective than the spread of cholera in Yemen. Cholera in the country has struck an average of about fifty people every hour for the past five years. This is a disease, first mapped by John Snow in London in 1850, that is controllable and treatable with established medical guidelines.

As Tedros Adhanom Ghebreyesus, the director general of the World Health Organization (WHO), correctly stated, COVID-19 is a challenge for all humanity that can only be defeated with our collective efforts. While the spread of COVID-19 is indeed global, disease-related deaths will disproportionately affect poor countries with undeveloped health-care systems and limited resources, especially those involved in armed conflicts such as Yemen. High-income countries like the U.S. and the UK admit to shortages in number of health-care workers and ventilators. Their shortages have the rest of the developing world concerned about receiving needed medical supplies to face the pandemic and the role rich countries can play to mitigate potential damages.

Unless all of us are safe, no one can be safe

Citing interference and aid confiscation by the Houthis, the United States recently cut health-care aid to Yemen, which will further weaken Yemen’s ability to prepare for the inevitable disaster. Unless the international community moves in a collective effort to stop the pandemic and suppress its spread in conflict zones, those living in such areas will end up paying the highest price. Unlike refugees on boats being pushed away or resettled in refugee camps, viruses will find their way. Unless all of us are safe, no one can be safe. If there is anything we can learn from today’s pandemic, it is that viruses recognize no borders. We are only as strong as the weakest among us, so the persistence of COVID-19 infection in one region of the world would almost certainly mean its recurrence and international spread.

Yemenis everywhere are concerned about the safety of their loved ones in Yemen. A couple of weeks ago, volunteers, including us, mostly with medical and/or public health expertise, formed a consulting group to help in the fight against COVID-19 in Yemen. We started on Facebook and are now building our website. Our goal is to provide policy recommendations for the Yemeni government, make educational materials available to the public, and try to bring the Yemeni problem to the international community’s attention. As Yemeni professionals with expertise on Yemen-specific needs and challenges, we intend to be a reliable source of information for the international community and provide assistance wherever needed.

Authorities in Yemen, with the support of the WHO and other United Nations agencies, have made a COVID-19 preparedness and response plan. However, Yemen still needs medical and laboratory supplies for areas deemed to be high risk and support in training local health-care workers. Needless to say, pressure on decision-makers is needed to enforce a cease-fire to direct all efforts and resources to battle COVID-19. This is a pivotal moment in history that later generations will look at and judge. We hope they will reflect on these days and find those with great power took and fulfilled the responsibility that comes with it.

Walid A. Al-Soneidar is a PhD candidate in epidemiology at the Department of Epidemiology, Biostatistics, and Occupational Health, McGill University


Nezar N. Al-Hebshi is an associate research professor and co-director of the Oral Microbiome Research Lab at Temple University's Kornberg School of Dentistry.

by Steven A. Cook