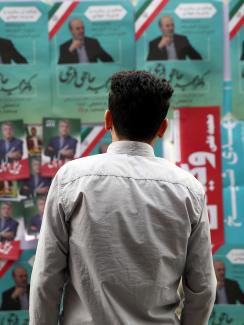 As the world wrestles with the possibility of a new pandemic in form of COVID-19, Iran appears to be one of the new coronavirus’ most vulnerable targets. The spread of the virus comes at a time of internal political discord and increased confrontation with the United States. The recent parliamentary elections that ensured a conservative majority saw the lowest turnout for such races in the history of the Islamic Republic.

For a regime that likes to boast about its popularity, a low-turnout was another blow to its legitimacy. All this comes at a time when the government was already beset by an uprising in November, which caused the death of upwards of fifteen hundred people, and the shooting down of a Ukrainian airliner by the Iranian Revolutionary Guards Corps that led to even more protests. The public is skeptical of all government declarations at the precise time when national resources have to be mobilized for combatting an infectious disease.

On the surface, Iran has the ingredients to deal with the current situation. And yet, its response has been confused and haphazard.

The Islamic Republic has faced its share of natural disasters in the form of floods and earthquakes, but it has little experience with the spread of a virus whose origins it poorly understands.

On the one hand, Iran has invested much in its public health infrastructure with the spread of hospitals and free clinics to even the most remote places in the nation. It has experience conducting public information campaigns on health issues, and its attempt to control population growth was effective even by international standards. Thus, on the surface, it has the ingredients to deal with the current situation. And yet, its response has been confused and haphazard.

The epicenter of the virus in Iran thus far seems to be the shrine city of Qom, which attracts many pilgrims from across the Islamic world. The government’s figure that twelve people have died was challenged by the parliamentary representative of Qom, Ahmad Amirabadi-Farahani, who claimed a death toll of fifty. This figure was later disputed by the Iranian Ministry of Health.

The confused response to sporting events is just one example of delayed reaction to the crisis. At first, it was announced that sporting matches would go on but the people were admonished to wash their hands frequently and avoid personal contact. Then came the announcement that events would go on but without spectators. Finally, sporting events were suspended and the government has gone on to close schools and universities.

Even before the crisis, Iran was experiencing an economic recession due to the re-imposition of sanctions by the United States. The International Monetary Fund projected that Iran’s economy would contract by as much as 10 percent in the coming year while its oil exports have declined from 2.3 million barrels per day in early 2018 to about 250,000 barrels per day now. The economic stress is causing the government to readjust its budgets and reduce subsidies. Moreover Iran may be more susceptible than other countries to the economic impact of a pandemic. China is Iran’s most important trading partner and fluctuations in its economy are bound to have an impact on Iran’s fortunes. In the meantime, Iran’s neighbors are closing their borders. All this is likely to further hinder trade at a time when Iran is laboring under an onerous sanctions regime.

All this is likely to further hinder trade at a time when Iran is laboring under an onerous sanctions regime.

Nor is it clear that a government that is unduly suspicious of the West is going to accept help from international organizations. After the crash of the Ukrainian airliner, Iran was reluctant to allow international inspections and has yet to turn over the black box to be decoded abroad. For now, the government spokesmen insist that the country has sufficient resources to combat the disease. But as the crisis deepens and more cases inevitably come online, Tehran will have to wean itself off its suspicions and collaborate with international efforts to control the spread of the virus. Whether it will do so or not remains to be seen.

Ray Takeyh is a Hasib J. Sabbagh senior fellow for Middle East studies at the Council on Foreign on Foreign Relations.