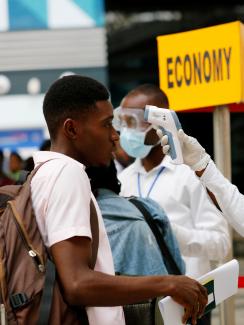 A health care worker screening passengers entering Ghana in West Africa for signs of coronavirus checks the temperature of a traveler at the Kotoka International Airport in Accra on January 30, 2020. REUTERS/Francis Kokoroko/File Photo
by Daniel Lucey and Kristen Kent February 6, 2020

As of February 5, 2020, there have been 28,261 laboratory confirmed cases of the novel coronavirus (2019-nCoV) in China and 28 other nations. This new epidemic is anticipated to become the first coronavirus pneumonia pandemic—meaning that it would have spread far enough to sustain a threat to populations all around the world. Given this direction, now is the time to think about diagnostic testing and active coronavirus control in Africa because its trajectory toward pandemic status will necessarily see it travel through the African continent.

To appreciate what role Africa may play in an emerging pandemic, it’s important to understand something of the origins of the outbreak and what has happened since. This virus was isolated in the first week of January 2020 in lung fluid from three patients with atypical pneumonia in Wuhan, the capital of Hubei province in central China. On January 7, China linked the virus to this new pneumonia. As of February 5, nearly all of the 565 deaths due to this virus have been in China.

With similar rapidity, by January 11 Chinese investigators released the genetic sequence of the virus that allowed development of rapid diagnostic tests. The virus is the third coronavirus (Co-V) causing pneumonia in humans. The first was the SARS-CoV, which originated in Guangdong province, China. The initial case was identified retrospectively on November 16, 2002. Transmission of SARS was declared to be over on July 5, 2003, at which time there had been approximately 8,000 cases and 774 deaths. The virus caused epidemics in Toronto, Canada and in multiple nations in east and Southeast Asia. No epidemics occurred in the southern hemisphere, and SARS has not reappeared.

A second coronavirus caused the Middle East Respiratory Syndrome (MERS-CoV). The earliest laboratory-confirmed infections were identified retrospectively in April 2012 within Zarqa, Jordan. The virus was first isolated from a patient in the Kingdom of Saudi Arabia and used to develop a diagnostic test. Over the past eight years, there have been 2,506 laboratory-confirmed cases and 862 deaths from MERS mostly in Saudi Arabia, as well as an outbreak in South Korea in 2015 that involved 186 people and 38 deaths.

Where Did the Virus Come From?

Until January 23 reports from China and the WHO focused on a single seafood/animal market in Wuhan as the source of the outbreak beginning in December 2019. As officially reported, clinicians identified a cluster of four patients with an atypical pneumonia who had an epidemiological link to this market on December 29, 2019 and reported it to local public health officials—a remarkable observation during winter pneumonia and influenza season. A rapid investigation was initiated December 30. The market was closed January 1. By January 3 the novel coronavirus had been identified in the first patient.

On January 9 China reported the initial fifteen patients who tested positive using their new diagnostic assay. By January 12, a total of forty-one laboratory-confirmed cases were reported. Among these, only one person had died.

Over the weekend of January 17–19, a total of 153 new cases were reported as use of the diagnostic test was applied in Wuhan hospitals and community health centers in patients with unexplained pneumonia. The WHO convened an Emergency Committee on January 22–23 to advise whether to declare a Public Health Emergency of International Concern (PHEIC). The WHO emphasized that there were only seventeen deaths reported out of 584 cases at this point and that more information was needed to assess transmissibility and severity. Therefore a PHEIC was not declared. Instead the WHO Director-General Tedros Adhanom Ghebreyesus traveled to Beijing to meet with President Xi Jinping. Meanwhile, the virus was documented day-by-day to be spreading quickly over the next week. By January 30, there were 7,711 confirmed cases, 1,370 of which were severe, and 170 deaths. WHO belatedly declared a Public Health Emergency of International Concern.

Our understanding of the timing of the epidemic changed significantly on January 24. Chinese investigators described the initial cluster of forty-one confirmed patients with the date of onset of symptoms and whether they had exposure to the market. The earliest patient had symptoms that began on December 1, 2019. Thus, he must have acquired his infection some time in November, given the 1–14 day estimated incubation period. Equally important, thirteen of the forty-one patients had no epidemiologic link to the market. It was now clear that the outbreak started before December, at one or more locations other than this single market. February 5 marks thirty-six days since the closure of the market. Still, no reports of any animals infected with coronavirus have appeared. This raises a question about the true origin of the virus.

On January 29 another crucial piece of the puzzle was provided when forty-five Chinese co-authors, including George F. Gao, the head of China’s CDC, reported on the early transmission dynamics for the initial 425 patients in Wuhan. They concluded, “there is evidence that human-to-human transmission has occurred among close contacts since the middle of December 2019.” These data support a conclusion that the epidemic did not originate by animal-to-human transmission in this one market, given that the virus was already being transmitted person-to-person in December.

Where has it Already Gone, and Where is it Going?

On January 12, Thailand reported the first case of novel coronavirus in a traveler from Wuhan. This traveler was found to have a fever on arrival at the Bangkok airport on January 8 and was immediately hospitalized. This event took place four days before the diagnostic test was available outside of China. Given that person-to-person transmission of coronavirus had been occurring since the middle of December, and that Bangkok is the most frequently visited international destination by plane from Wuhan, this first recognized case in Bangkok suggests that there were very likely earlier cases of nCoV exported to Bangkok.

In fact, if this patient had not been identified and hospitalized on January 8, she would have been one such example of unrecognized exportation from Wuhan to another country before the availability of a diagnostic test (on January 12 in Thailand, but still unavailable in many less-developed nations around the world as of February 5).

If the virus establishes sustained person-to-person transmission in the southern hemisphere, then year-round transmission could occur

By February 5, at least five nations reported limited person-to-person transmission. Of major concern are the confirmed cases in Australia and anywhere else in the southern hemisphere where they may already exist. No cases have yet been reported in Africa, despite the very large number of persons traveling between China and most nations in Africa. As of January 31, there were only two referral laboratories with reagents for the new diagnostic test in sub-Saharan Africa. Therefore, the lack of recognized and reported cases is overwhelmingly likely due to the lack of diagnostic testing availability. If the virus establishes sustained person-to-person transmission in the southern hemisphere, then year-round transmission could occur. SARS, however, did not occur in the southern hemisphere. This likely contributed to the end of SARS transmission by July 2003.

The virus has now been confirmed in all provinces in China. In Wuhan and across Hubei province, the extensive spread of the virus resulted in the decision to close down the Wuhan airport and all train stations as of January 23. Travel restrictions soon included all cities in Hubei province, totaling more than 50 million people, despite the usual mass travel around the Lunar New Year. Ominously, between February 2–4, similar travel and quarantine restrictions were put in place in the eastern coastal province of Zhejiang, including the capital Hangzhou and two more major cities of Wenzhou and Taizhou.

So now that this epidemic is anticipated to become a pandemic, what will a pandemic look like? It would include sustained transmission in multiple nations, something that may soon occur, including within the southern hemisphere. That would create year-round transmission like influenza. How do we mitigate the damage such a pandemic would cause to the health infrastructure and head off other societal and economic threats posed by this new contagious virus for which there are as of yet no available drugs to treat, or vaccines to prevent, infections and against which people have no pre-existing immunity? Our emergency international response must include immediate laboratory diagnostic testing linked with immediate comprehensive actions to control the virus in Africa. These actions are essential to implement today—hopefully before sustained person-to-person transmission begins in one or multiple nations in Africa. Otherwise, across the African continent a preventable tragedy much larger than the one due to Ebola in West Africa will occur.


Kristen Kent, MPhil, is a medical student at Georgetown University School of Medicine