Go to homepage
Will “Mysterious” Virus Soon be Named?
Governance 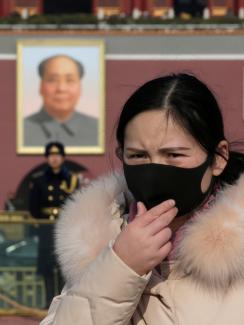 Since the emergence of a pneumonia-like illnesses linked to a new SARS-like virus in central China last month, hundreds of cases, more than a dozen deaths, and human-to-human transmissions have been confirmed. The outbreak started at the Huanan Seafood Wholesale Market in Wuhan, and the Chinese government announced this week they were closing all traffic in and out of that city—as well as suspending transportation in several other cities and canceling all Chinese New Year celebrations in Beijing. The isolation of Wuhan constitutes the largest population quarantine in human history.

Most of the cases have been in China, but they have spread to more than ten other countries, including the United States, imported by infected travelers. All this has elicited anxiety and protective measures around the globe. The World Health Organization is considering whether to give the outbreak the highest-level declaration of a public health emergencies of international concern (PHEIC), something that has only been done five times in history—though this week they delayed the decision pending more information

Other Asian and Pacific nations, including Austarlia, Bangladesh, Indonesia, India, Malaysia, and Singpore, and Vietnam, have implemented screening measures at airports for passangers arriving from Wuhan, where the outbreak started, and elsewhere in China. Some of China’s main trading partners or tourist destinations, such as Italy, Nigeria, and Russia, have also begun implementing their own screening or safety measures. In the United States, five major airports in Atlanta, Chicago, Los Angeles, New York, and San Francisco are screening travelers from Wuhan, a city of eleven million people in central China and an important transport link between some of China’s major cities, including Beijing, Chengdu, and Shanghai.

But if the world is in some ways united in its concern over this new illness, there is less agreement on what people should call it. Before other Chinese provinces outside of Hubei, where the city of Wuhan is located, confirmed cases of the coronavirus, some on Chinese social media were calling it the "patriotic virus," an apparent satirical reference that somehow the disease only left the country, not the province.

People confirmed to have SARS during 2003 outbreak

The disease has been called “unexplained pneumonia” in Japan, and in the United States, numerous media reports have referred to the infectious agent as a “mysterious” virus, though experts say that's inaccurate since the virus was quickly sequenced and has been definitively identified as a type of coronavirus—a family of viruses that cause diseases in humans and many different animals ranging in severity from innocuous common colds to SARS, which infected 8,000 people in a major outbreak in 2003 and killed 774.

"It’s not accurate because we know what it is," said University of Iowa immunologist Stanley Perlman, an expert on pediatric infectious diseases who has been working with coronaviruses for thirty-eight years. "We know that it’s a coronavirus. We may not know if it’s changing or not, and we may not know all the details of how it affects people, but it’s not like it’s a virus from Mars."

According to a spokesperson for the World Health Organization (WHO) who responded to Think Global Health in an email, the official name, at least for now, is 2019-nCoV, which designates the pathogen as a novel coronavirus first discovered in 2019, since China first reported the infections to the WHO on December 31, 2019.

The WHO said that this official name is interim and work has begun to find a more permanent designation. “We have started the process of convening a meeting to agree on a name for the long term," said the spokesperson for the WHO, which first confirmed the disease as a new type of coronavirus on January 9, 2020.

What Not to Expect

How diseases get their names is a topic we’ve covered in Think Global Health previously. Just a few years ago, the disease may have been named after Wuhan, the city where it first appeared—and given a name similar to its cousins SARS or MERS—perhaps it would have been called WURS (Wuhan respiratory syndrome). Don’t expect anything like that today.

A few years ago the WHO published new guidelines spelling out best practices for naming human diseases, which they developed in conjuction with the World Organization for Animal Health (OIE) and the Food and Agriculture Organization of the United Nations (FAO). The aim of these new guidelines was to be sensitive to cultures, the WHO spokesperson said in an email, and “to minimize unnecessary negative impact of disease names on trade, travel, tourism, or animal welfare.”

Because enshrining the name of a place in the name of the disease can affect trade, tourism and property values, the new rules specifically ban that practice. They also call for avoiding names of individuals (like Alzheimer's or Parkinson's disease), groups of people (like Legionnaire’s disease, miner’s lung), animals (like swine flu or monkey pox), and words that can be alarming or stigmatizing. MERS, one of the cousins of SARS and the new virus 2019 nCoV, specifically violates these rules because it's an acronym for Middle East Respiratory Syndrome. In fact, the WHO guidance document specifically names MERS as an example of the type of name to be avoided.

Think Global Health put the question this week to experts, including Perlman, who was one of a group of experts on the International Committee on Taxonomy of Viruses who first proposed the name MERS in 2013. Aside from what to call it there are a number of other issues to figure out, the experts said.

SARS was introduced into Taiwan at least three times, and each time it was a different virus

What you have to watch for in this infection are mutations, one expert said. We don't yet know how contagious or lethal the virus is at the moment, but we do know that coronaviruses naturally mutate, potentially making them worse in various ways. What scientists saw during the course of the SARS outbreak was that the virus changed over time, making outcomes different for people infected late in the virus compared to those who became sick in the beginning. "You have to watch for mutations that change the virulence of the virus," said Michael Buchmeier, an immuniologist at the University of California, Irvine who has studied coronaviruses for many years. "SARS was not one virus—SARS was introduced into Taiwan at least three times, and each time it was a different virus in terms of its pathogenic potential.

Another issue is where the new virus came from. Like other coronaviruses, 2019 nCoV is zoonotic, which means it primarily circulates in some other animal. MERS is usually spread to humans from camels, but scientists believe it was spread to camels from some other animal, such as bats. The new virus is more similar to some bat coronaviruses than it is to SARS, Perlman said—85 to 90 percent identical to those bat viruses. "I think in the end it’ll probably turn out to be a bat virus, ultimately, but the question is whether it jumped directly from bats to people or if it went through intermediate hosts," Perlman said.

Another issue, he added, is whether there are unrecognized pockets of disease outside of urban areas.

We have this outbreak in Wuhan, but are there outbreaks in these little towns around Wuhan that we don’t know about?

He also commented on China's announcement this week that it was closing the city of Wuhan to traffic in and out. There is particular concern in the country about the upcoming Lunar New Year, the single largest travel event in China. Hundreds of millions of people will soon be traveling throughout China to return to their hometowns or to destinations abroad to celebrate the national holiday. Zhong Nanshan, the leader of a group of experts at China’s National Health Commission and the respiratory disease specialist who discovered SARS in China in 2003, warns that infections will likely increase during the forty days of Spring Festival travel in China as people travel throughout China and to other countries in the region—one of the reasons for China's quarantine of Wuhan.


Jason Socrates Bardi is the former deputy managing editor for Think Global Health, in the David Rockefeller Studies Program at the Council on Foreign Relations (CFR).

Origins of the word, “dengue” are shrouded in mystery—unlike most diseases, which follow more obvious naming conventions