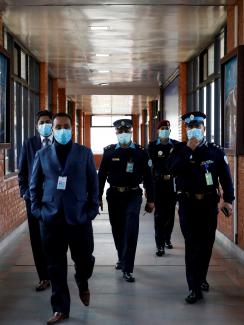 Nepalese police officers and other officials walking inside the Tribhuvan International Airport in Kathmandu after Nepal confirmed the first case of coronavirus in the country on January 28, 2020. REUTERS/Navesh Chitrakar.
by Deepa Jahagirdar January 28, 2020

This week, the United States saw its first few cases of the new coronavirus. While the country had already mandated extra screening for travelers arriving from China at a few key airports and issued travel warnings, it is not alone. Countries are taking measures to ban travel. These changes rarely prevent the spread of disease, but they are likely to spur devastating economic and health consequences. They may also violate international health law.

An estimated $2.2 billion was lost in Guinea, Liberia and Sierra Leone during Ebola in part due to trade and travel restrictions.

The 2005 International Health Regulations (IHR) govern both outbreak reporting and country actions to prevent spread of disease. Since their passage, countries must report potential public health emergencies of international concern to the World Health Organization (WHO). Timeliness in outbreak discovery and public communication has in fact steadily improved, and China is credited with a much quicker response to this latest outbreak than for SARS. At the same time, the regulations require countries to base actions that discriminate or disrupt travel/trade on scientific evidence and public health principles. They must provide WHO with the justification for those efforts (Article 2, 43).

Restrictions on people can work in some circumstances, but not blanket orders. The IHR sought to limit unnecessary restrictions. However, banning Mexican flights or blanket restrictions on those from Mexico was not uncommon during the 2009 H1N1 outbreak. In 2014-15, Ebola prompted high-level calls to shut down the U.S. border, contrary to WHO recommendations. “Travel bans are detrimental and ineffective,” wrote Isabelle Nuttall, the director of Global Capacities, Alert and Response at WHO in November 2014—at the height of the Ebola outbreak. “The key to stopping the international spread of this disease is global vigilance.”

The human toll of outbreaks is compounded by countries’ lack of adherence to IHR. An estimated $2.2 billion was lost in Guinea, Liberia and Sierra Leone during Ebola in part due to trade and travel restrictions. Travel and tourism losses are even more difficult to quantify. This is on top of the human costs, which are easier to measure. At the time of writing, there are more than 4,500 reported cases of the new coronavirus and more than 100 deaths, according to the WHO [PDF]. The death toll from the 2014-15 Ebola outbreak was over 11,000. SARS deaths eventually rang in at just under 800.

Global reactions without scientific basis are proving much harder to contain

Despite the fact that IHR is binding on all WHO member states, fear-driven actions and consequences that disregard the principles are common. When faced with political and popular pressures to restrict travel or discriminate against certain nationalities, inherent motivation to follow international law is not strong enough. At the same time, the WHO cannot easily enforce adherence to IHR regulations. History echoes as travel warnings and restrictions continue to mount in the face of the new coronavirus. While we may be starting to meet our obligations on outbreak reporting, global reactions without scientific basis are proving much harder to contain.

mRNA Therapeutics: The Technology That Saved the World