Go to homepage
Coronavirus and the World Economy
Trade 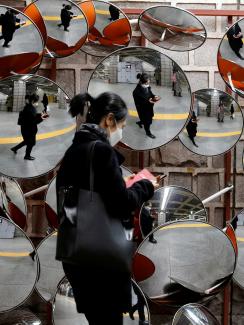 While the COVID-19 outbreak may be stabilizing in China, it is spreading rapidly in other countries, especially in Japan, South Korea, and Iran. As of February 24, 2020, more than thirty-three countries have reported confirmed cases. Although the number of cases in most countries remains relatively small, it may be just the “tip of the iceberg,” according to World Health Organization (WHO) Director-General Tedros Adhanom Ghebreyesus. Already, U.S. Centers for Disease Control and Prevention (CDC) officials are preparing for the scenario in which the virus evolves into a pandemic—a scenario in which businesses and schools may have to be shuttered for weeks to contain further spread of the virus. As a coronavirus pandemic looms large, how it may affect world economy becomes a major concern.

Since the situation worldwide is still evolving, it's too early to make even a rough estimate of the exact overall cost to the global economy. That, however, does not prevent us from exploring some of the ways in which a full pandemic would lead to economic downturns. Few would dispute that a coronavirus pandemic may take a heavy toll on the world economy. Still, the economic impact may be more complex than we have thought.

As former World Bank economist Maureen Lewis reminds us, the relationship between the costs inflicted at the micro level and those on the whole society may vary across epidemics. Demographic restructuring caused by the Black Death in the fourteenth century, for example, fostered the possibility of new economic growth by leaving the attenuated population in Europe with substantially more resources to exploit. All else being equal, a disease that kills only the elderly or infirm can even have the perverse effect of raising the GDP per capita, provided that those at the most productive ages survive. But there are fewer people in total to share the wealth. How the economic impact will unfold to a large extent is decided by the nature and the trajectory of COVID-19 if it becomes a pandemic, which seems increasingly likely.

But extrapolation from historical data may also lead us to overlook the shifting landscape over which the pandemic will be unfolding. When SARS hit China seventeen years ago, the country was not considered a top engine of global economic growth. Today, it is the world’s second largest economy, contributing approximately one third of global growth. Its share in global trade has expanded from 5.3 percent in 2003 to 12.8 percent last year. Countries like the United States depend on China for both Chinese goods (for direct consumption and as components for manufacturing supply chains) and Chinese consumers (for sales). This means that the pandemic’s economic impact will likely be substantially larger than that of SARS.

The Drivers of Economic Impact

Like SARS, the pandemic will affect the demand side by changing consumption patterns. People will refrain from travelling or going to restaurants or shopping malls. The impact of the pandemic on demand, though, may not be always negative. Fear and uncertainty may lead people to rush to purchase daily necessities and other goods, which is facilitated by e-commerce, now a major driver of China’s retail industry.

Not surprisingly, the aviation and tourism industries (including hotel and cruise ships) will be particularly hard hit by a pandemic

However, with the sustainable, large-scale transmission of the new coronavirus and fear-induced behavioral changes in consumers, travelers, and businesses, the pandemic may cause a significant reduction in consumption and export of services. Uncoordinated international responses to the disease—travel restrictions, mass quarantines, closures of businesses and schools, import bans—will exacerbate the economic impact by sustaining the psychological impacts and reinforcing a tendency for markets to overreact. Not surprisingly, the aviation and tourism industries (including hotel and cruise ships) will be particularly hard hit by a pandemic. If a pandemic were to last more than a year, it may lead to widespread business failures, mass unemployment, and further decline of consumer demand, which may throw the world into a global recession.

Unlike SARS, a coronavirus pandemic is also going to cause shocks on the supply side due to higher level of absenteeism and much greater reliance of manufacturers around the world on Chinese-made supply chain components. Strict containment measures, such as sealing off cities and villages, will negatively affect labor productivity by inhibiting labor from moving to places where it is most productive. Normal business operations would be significantly affected as a large percentage of workers get sick, become scared to go to work, or cannot return to work because of government containment measures. Studies suggested that if more than one quarter of a population is infected, the reduced labor force would significantly affect basic services such as fuel and food supply.

Difficulties in trade and travel will interrupt the flow of goods and services, with “cascading effects” in industries where supply chains depend heavily on supplies in the affected countries. A world economy that is so dependent on China as an industrial lifeline is highly vulnerable to the economic disruption caused by the coronavirus outbreak in the country. Already, Indian pharmaceutical companies are concerned over the shutdown of factories in China that provide almost 70 percent of the active pharmaceutical ingredients for the formulation of drugs in India, which is the world's leading manufacturer of generic drugs. Many of the drugs India produces cannot be made without these key active pharmaceutical ingredients, however, and if their Chinese suppliers are interrupted past April, that will likely lead to worldwide generic drug shortages and potential price increases.

Are There Reasons for Hope?

Don't come away from reading this essay thinking it's all gloom and doom. Despite the overall negative dynamics between a coronavirus pandemic and economic growth, the potential of economic rebound in the immediate aftermath of the pandemic should not be overlooked.

Here a distinction must be made between the pandemic’s impact during the pandemic and the impact in its immediate aftermath. The 1918 Spanish Flu pandemic, for instance, did not lead to a drop in per capita income growth in the United States in the 1920s. Indeed, research suggests that American states with the highest mortality rates and highest business-failure rates grew fastest between 1919 and 1930. In 2003, the end of the SARS epidemic was followed by rapid and robust economic growth in Asia, particularly China. Societies and economies can be highly resilient. The speed and strength of the economic revival, though, may depend on how long the pandemic lasts and how much damage it does to the manufacturing sector.

That said, the pandemic’s long-term economic consequences cannot be dismissed. Unlike SARS, it may lead to significant drop in physical capital (due to reduced investor confidence) and human capital (as a result of mass morbidity/mortality), thereby reducing long-term economic growth potential.

Globalism is likely to be the biggest victim of the pandemic

If the virus persists in an affected country and disrupts global production lines, the increased risk profile in doing business there will reduce foreign investment and exports in that country. U.S. companies, including McDonald’s, Nike, and Starbucks, have already closed many of their stores in China. As far as the human capital is concerned, infections of pregnant women may affect fetal and newborn development. Research suggests that babies whose mothers were infected with influenza while they were in utero during the height of the Spanish Flu pandemic typically display reduced educational attainment, lower socioeconomic status, and increased rates of physical disability.

But globalism, embraced by China but rejected by the Donald J. Trump administration, is likely to be the biggest victim of the pandemic. A highly connected global economy not only facilitates the spread of the coronavirus, but also exacerbates the negative economic impact. Open economies and economies with a prominent service sector (e.g., tourism) are particularly vulnerable to economic shocks associated with a pandemic. The economic losses, in turn, will strengthen forces of protectionism and isolationism. As a result of the shortened supply chain, production worldwide may become more localized or regionalized.