Go to homepage
Coronavirus in the Middle East
Governance 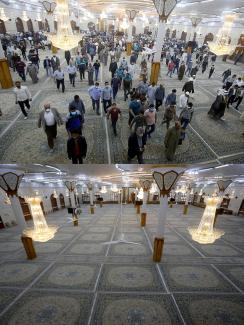 Worshipers walking out after prayers at the Basra Grand Mosque in Basra, Iraq on March 12, 2020 and the same view on March 17, 2020—after a curfew was imposed to prevent the spread of coronavirus. REUTERS/Essam Al-Sudani
by Steven A. Cook March 17, 2020

As the novel coronavirus and COVID-19 races across the globe, the one Middle Eastern country that has received considerable attention is Iran. The inability of authorities to stabilize the infection rate there and the magnitude of the outbreak—believed to have been the result of Chinese workers building infrastructure in the city of Qom—has raised alarms among global health experts and foreign policy analysts alike. Yet Iran is not unique in the region. It may have been struck earlier than other countries, but they all face similar problems, notably a fragile public health system and leaders many citizens believe to be illegitimate, sowing mistrust and fear.

They all face similar problems, notably a fragile public health system and leaders many citizens believe to be illegitimate, sowing mistrust and fear

Observers should assume that the number of actual cases of COVID-19 is many times higher than what governments in the region are reporting. For example, on March 15, Egyptian Prime Minister Mustafa Kamal Madbouly declared that there are 109 cases in the country, but modelers at the University of Toronto indicated that the number of infections could be as high as 20,000. This was before Egypt instituted any measure to contain or mitigate the spread of novel coronavirus. Although Egypt and other countries in the region have private sectors of varying degrees of development and sophistication, governments have equally varying means to coordinate a response with the help of business interests.

Add to these problems a certain amount of denial among some officials in the region. Like in the United States, where Americans have been subject to mixed messaging about the dangers of the novel coronavirus, Turks were encouraged to visit malls and to shop without fear. Egyptian officials worried about the country’s tourism sector, which experienced a significant comeback in 2019 after years of decline, have stated that the virus is “weak” and that most people only experience mild, cold-like symptoms.

Finally, there is a massive logistics issue. It will be difficult to undertake social distancing and deliver medical care in the region’s megalopolises, especially poor districts in cities like Cairo and Istanbul. People at the lower end of the socio-economic scale always suffer more in a crisis, but the problem is going to be acute in places that lack good information and trustworthy stewards of public health. This issue is particularly problematic in the countries and city-states of the Persian Gulf, where there are significant numbers of migrant workers from Bangladesh, India, Pakistan, the Philippines and other countries who do much of the menial work that make these societies run, but who have no power. The infection rate in the worker camps that dot the Gulf landscape is unknown, and guest workers are likely to be tested last for the novel coronavirus—if they are tested at all.

Below is a roundup of what experts know about infection rates in major countries of the region and the actions governments have taken to address the pandemic:

Iraq is a particular concern because it is already in a state of terminal collapse, parliament barely functions, and the government is unable to marshal significant resources outside of Baghdad. There is no telling what might happen when COVID-19 starts killing large numbers of Iraqis.

The countries above are illustrative of the problems and responses throughout the region, but there is an additional threat worth mentioning. According to the head of the International Committee for the Red Cross, if coronavirus enters Yemen and Syria—two failed states—it will be “impossible to manage.”

Steven A. Cook is the Eni Enrico Mattei Senior Fellow for Middle East and Africa Studies at the Council on Foreign Relations.