Go to homepage
Collateral Damage of the U.S. Withdrawal from the WHO: Frontline Responders
Governance

Collateral Damage of the U.S. Withdrawal from the WHO: Frontline Responders 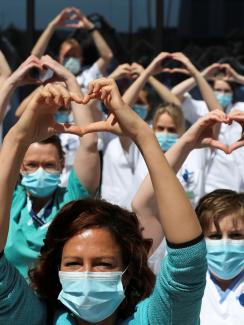 Health-care workers, nurses, and doctors, protesting under the movement called "Take Care of Care" during the coronavirus crisis, at the MontLegia CHC Hospital in Liege, Belgium, on May 15, 2020. REUTERS/Yves Herman
by Sonya Stokes July 10, 2020

By the end of March, we stopped testing health care workers in New York City. Community transmission of the virus was already widespread and rising fast. Any one of us showing symptoms was simply sent home to self-isolate—unless we became very sick. Then we were put on oxygen and admitted to the hospital. Some of us were started on an experimental drug. There was no cure. Those who remained healthy stepped up to fill in the gaps in coverage. Doctors took on additional shifts. Nurses managed caseloads of more than fifteen patients at a time. Medical technicians working overnight soldiered on through the morning without sleep. We were facing a mass casualty event most of us had never before seen, and it was all hands on deck. We saved as many lives as we could and comforted those who were dying despite all our efforts. Some of the dead included our friends and colleagues, and when we took breaks for a drink of water and a few moments of rest, we grieved their loss in private. Then we put on our masks and went back to work. Many painful lessons were learned in those first few weeks of the outbreak. There is one I will never forget: protecting our front lines during a pandemic is paramount.

Without an effective treatment or ready vaccine, human resources remain our first and only line of defense

When describing my work as an emergency physician, I usually refrain from using military analogies out of respect for the men and women who serve in our armed forces. I myself have never served, and I cannot know the hard truths they have faced and even harder decisions they have made to ensure the security of people under their protection. But if it is true that the fight against COVID-19 is a war, then it is attrition warfare we are fighting. Without an effective treatment or ready vaccine, human resources remain our first and only line of defense. And every casualty among our health care workers creates a compounding deficit. One less ventilator deprives one patient from receiving a single life-saving intervention. One less respiratory therapist who is out sick strips four patients who are already on ventilators from receiving the requisite care critical to their survival. It comes down to common sense. Protecting our frontline responders must be prioritized as a matter of self-preservation.

This priority extends to our allies on the global front lines, because when there is risk of COVID-19 anywhere, it threatens us everywhere. The safety of our colleagues in every part of the world is necessary for keeping us safe at home. This imperative is what makes the plan to revoke United States support for the World Health Organization (WHO) totally nonsensical and a blatant hazard to our own health. In mid-April just as COVID-19 was decimating our emergency departments in New York City, the White House issued a temporary suspension of funding to the WHO, citing the multilateral institution with an assortment of perceived infractions including altering COVID-19 data and delaying the declaration of a Public Health Emergency of International Concern in deference to the government in Beijing. These grievances intensified at the end of May where in the culminating events of the seventy-third World Health Assembly, the White House announced it would permanently defund the WHO and renounce United States membership altogether.

Remediation is a far cry from retribution

While many of the accusations made by the White House are clearly inflammatory and remain unsubstantiated, we should recognize the WHO is not without fault. It has, in fact, committed serious errors, including its failure to recognize person-to-person transmission of COVID-19 earlier in the outbreak, and we should seek appropriate remedial measures in order to prevent history from repeating itself. To that end, the WHO has agreed to cooperate with an independent, comprehensive investigation into the effectiveness and timeliness of its international COVID-19 response. This is a fair and logical step to address some of the complaints put forth by the White House and other governments. However, remediation is a far cry from retribution. Withholding financial support to the WHO does not correct any deficiencies nor does it compensate for any presumed injuries. On the contrary, it cripples our allies on the global front lines, and it endangers us all.

Any emergency physician working in New York City these past few months can attest to the relentless surge of COVID-19. We have endured due in large part to a mass reallocation of vital health resources and services: personal protective equipment, intravenous medications, and retraining and relocating hospital staff. In the financial capital of the United States, it was a hard scramble to find enough basic supplies and qualified personnel without which our staggering mortality figures would be even more catastrophic. Stopping funding to the WHO will effectually cut off these same vital health resources and services to frontline responders in low-income countries who depend on the WHO for procurement of face masks and respirators, distribution of essential medicines, and trainings for community health workers. And let’s not delude ourselves into thinking any shortfalls will be instantly fulfilled by some nascent domestic initiative proposed in the President’s Response to Outbreaks. The WHO, however imperfect, is an irreplaceable lifeline for health care workers on the global front lines protecting our most vulnerable populations against the pandemic.

Some have previously dismissed the threats made against the WHO as political posturing, and that there was no real intent to rescind United States funding or membership. These assumptions were proven false this week as the United States initiated a formal withdrawal from the WHO for presumably failing to comply with demands made by the White House. And think for a moment what we are allowing in this. Medical ethics forbids denying or threatening to withhold health care as a means or method of punishment and extortion. For a self-proclaimed wartime president to do so in the midst of the greatest public health crisis of our lives should be considered a war crime. And to avoid any Rendulic excuses in the future, let it be made clear here and now: to deliberately impede vital health resources and services in the middle of a pandemic penalizes our frontline responders indiscriminately, causing unnecessary, universal suffering. It represents the misappropriation of medicine in its most egregious form—as a weapon of mass destruction.

I will never forget what we experienced with COVID-19 in New York City. That we, in the United States, would not do everything within our power to stop this from happening anywhere else is a disgrace. But to knowingly and willfully harm our allies on the global front lines just as the pandemic closes in around the world—I do not know what the right word is for this. We have already lost so much, and there is so much more to lose if we do not fight to safeguard our frontline responders who are fighting to save us all. This is the only winning strategy, because an enemy that knows no boundaries can only be defeated if we stand united. We, in the United States, must stand by our global allies on the front lines by standing in support of the WHO.

Sonya Stokes, MD, MPH, is an assistant professor of emergency medicine at Mount Sinai Icahn School of Medicine, and she is a medical director at Mount Sinai Health Partners' Advisory Group on COVID-19. She is also a term member at the Council on Foreign Relations where she serves on the Independent Task Force on Preparing for the Next Pandemic.

I Am an ER Doctor in New York City