Go to homepage
Why the WHO?
Governance 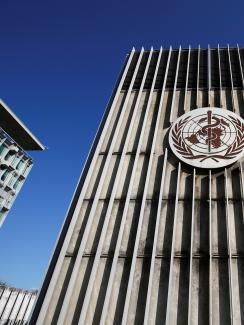 The headquarters of the World Health Organization in Geneva, Switzerland, May 18, 2020. REUTERS/Denis Balibouse
by Chelsea Clinton, Eric A. Friedman, Lawrence O. Gostin, Devi Sridhar May 29, 2020

After leveling a slew of inaccurate or unsubstantiated charges against the World Health Organization (WHO) for its COVID-19 response and threatening to withdraw U.S. support for the WHO in a letter its director-general last week, Donald J. Trump today announced his intent to carry through.

In between blaming the WHO for the pandemic’s global cost and praising WHO’s response to the 2002-2003 SARS epidemic, his letter had gotten at least one thing right. He implicitly recognized the need for an effective, empowered international organization to facilitate global health cooperation.

Yes, the WHO requires reform to enable it to fulfill its mandate—including more independence from member states, whether the United States or China. Because its members are governments, WHO is inherently a political organization. But giving WHO greater independence would mean providing WHO with the funds and authority it needs. Cutting off funding or withdrawing from WHO would only harm the global response to COVID-19 and cost untold lives.

So why should the WHO continue to lead, instead of a new-and-improved international organization as Trump has been rumored to suggest?

First, let’s first dispel the notion that the United States could successfully spearhead a campaign to replace WHO. It took a world war to establish the United Nations, with the WHO as its first specialized agency. The WHO’s own history stretches back further. In 1851, European nations launched a series of conferences to discuss cooperation on cholera, yellow fever, and plague. It took more than four decades for Europe to agree on “common measures for protecting public health.” Today, WHO has 194 member states and covers the full range of health threats. Rebuilding the consensus it took to create the WHO for a replacement, especially in a world of politicized global health and nationalist leaders, would likely take decades, and the resulting organization would be politicized and ineffective, reflecting the politics that led to its creation. The only realistic choice is between a strengthened WHO or a huge void in global health governance.

Second, Trump criticized WHO for failing to independently investigate reports that conflicted with information from the Chinese government. However, this criticism misunderstands the role that the WHO can play.

This criticism misunderstands the role that the WHO can play

The WHO has never had the power to require governments to share outbreak information, though reforms could enhance the WHO’s ability to act on unofficial sources of information. Similarly, the WHO cannot punish countries for not reporting data quickly and accurately. And it seems inconceivable that the world would agree to give a new, untested organization powers that it would not give a trusted, well-established one.

What, then, does WHO do? Quite a lot.

WHO has been an integral part of the world’s response to emergent infectious disease threats, including SARS, pandemic influenza, Ebola, and Zika

Throughout its history, WHO has been a world leader on childhood immunizations. WHO’s vaccine campaigns drastically cut the global incidence of and deaths from measles and many other childhood diseases. Its greatest achievement was the eradication of smallpox. In the 1970s, 200 million children a year received smallpox vaccines, and by 1980, WHO declared the world smallpox free. Less than a decade later, WHO, the United States, and other partners launched the Global Polio Eradication Initiative to immunize every child at risk. Hundreds of millions of health workers vaccinated billions of children, and as a result polio has been reduced by more than 99 percent, now confined to the Afghanistan and Pakistan.

WHO provides strategic planning, technical guidance, and on-the-ground technical support. It facilitates political dialogue, and even advocates. Its actions that have helped save millions of lives from the full gamut of health threats, including HIV/AIDS, tuberculosis, malaria, maternal mortality and morbidity, and childhood diseases. It negotiated two transformative global agreements on breastmilk substitutes and on tobacco control. And WHO has been an integral part of the world’s response to emergent infectious disease threats, including SARS, pandemic influenza, Ebola, and Zika. Without the WHO, many disease outbreaks that countries now contain might have reached U.S. shores. WHO adopted a COVID-19 testing protocol that other countries used successfully. Ignoring WHO’s expert guidance, the Trump administration chose to instead develop its own, leading to a deadly delay in COVID-19 testing.

What will the consequences be in lives lost and families mourning loved ones?

The WHO continues to provide crucial leadership in marshaling the world’s response to COVID-19. It is coordinating an unprecedented effort to produce new tests, vaccines, and treatments for COVID-19 and ensure equitable access to them. Governments, international organizations, private sector leaders, philanthropists, and NGOs have all joined this effort. Notably absent has been the United States. If the United States does not participate in the global consortium on testing, vaccines, and treatments, what will the consequences be in lives lost and families mourning loved ones?

WHO is uniquely positioned to lead and coordinate the world’s response to COVID-19 and the plethora of other global health threats. Over its seven-plus decades, it has developed trusted relationships with heath ministries around the world, established offices in 150 countries, and built a track record that, while certainly not perfect, is overall one of success. It would take decades for a new organization, particularly one born under such circumstances, to develop these assets.

The real victims will be the children, parents, and grandparents in countless communities

In the end, it is not the WHO leadership who will become the victim of Trump’s animus toward the agency. The real victims will be the children, parents, and grandparents in countless communities vulnerable to new and recurring communicable diseases—including COVID-19 itself, as the pandemic accelerates around the world. The WHO is essential to convene scientific experts and catalyze the world’s best thinking on COVID-19. Going forward, the WHO must explain what it does and doesn’t do, and where it has succeeded and failed. And the Trump administration can push for it to do just that without jeopardizing its vital work, or American lives.

Chelsea Clinton is the vice chair of the Clinton Foundation and an adjunct professor at Columbia Mailman School of Public Health.


Devi Sridhar is professor and holds a chair in global public health at the University of Edinburgh's Medical School.

Coronavirus in Europe: Who If Not Us?

Can the EU balance internal recovery with geopolitical influence and lift its gaze towards the international sphere?