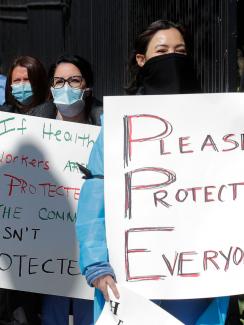 It will be months, if not years, before we have the perspective to tell the story of COVID-19—to fully account for the number of lives lost and to comprehend the extent to which the pandemic disrupted our societies, our economies, and our lives. But one thing that is already clear is that the story’s protagonist heroes will be the health care workers of the world. At this moment in the pandemic, the top, most immediate concerns and where the focus of all governments and institutions should be above all else is the safety of the nurses, doctors and other health workers who are now risking or will soon be risking their lives—and their families’ lives—in extremely trying circumstances.

I was a part of the International Federation of the Red Cross response in West Africa in 2014–2016, when nurses and doctors were as much as thirty-two times more likely to be infected with Ebola than people in the general population. More than 500 of our colleagues across health care systems in the region succumbed to the disease. And still, nurses like Josephine Selu, the matron of Kenema Government Hospital in Sierra Leone, turned up to work and encouraged not only the nurses but all the staff to keep working, even after losing fifteen colleagues in one week. Her dedication was extraordinary. Her bravery was reflected in the selfless actions of the countless other doctors, nurses, community health workers, and volunteer teams who buried the dead—even at the risk of being shunned by their families and communities. “If we don’t do it, who will?” was their rallying cry.

Today, we know that there are thousands of health care workers in Italy with confirmed cases of coronavirus and more than forty who have already died. The Democratic Republic of the Congo has only several dozen cases identified in the country so far, but an emergency room nurse is among them. We saw a foreshadowing of this danger with the pandemic’s most high-profile early victim—Li Wenliang, the doctor in Wuhan, China who sounded the alarm on December 30, 2019 and whose death a few weeks later on February 7 reverberated globally. That same day, we learned that in just one Wuhan hospital, 41 percent of the first 138 patients diagnosed had been infected within the hospital itself.

WHO forecasts a shortage of 18 million health workers by 2030, and today’s gap is more than 7 million in 83 countries

There are fifty-nine million health care workers around the world. We already face a massive shortage of health care workers—a deficit that grows daily. Even before the COVID-19 pandemic, the World Health Organization had forecast a shortage of eighteen million health workers by 2030, and today’s gap is more than seven million in eighty-three countries. We saw firsthand in the West Africa Ebola epidemic that deaths from other causes—from childbirth to HIV/AIDS and tuberculosis—increase as fragile health care systems cannot handle drastic increases in patient caseloads.

COVID-19 has now spread to almost all countries, with more than 1.3 million confirmed cases. A shocking 1,169 people died in the United States on one day, and in the middle of March, one person was dying every 10 minutes in Iran.

Health care workers are being asked to handle an unprecedented, contagious disease for which so far there is no vaccine or effective treatment, and at the starting line, we know they are not equipped with what they need. This is a threat in countries with low-resource health systems, and the same problem also exists in Europe and the United States, where personal protective equipment such as masks, gowns, and gloves are in short supply, and where there may not be not enough respirator equipment to handle the number of cases requiring intensive care. In places with weak or under-prepared health systems, health facilities may not have access to basic hospital necessities like electricity or running water at all. A massive surge of people with COVID-19 will make it extremely hard for health care workers to protect themselves and the people they care for. We need to do more if we expect them to stay on the frontlines and protect us all.

What Specific Approaches Should We Take?

Within facilities, we can protect health care workers through what is called a “hierarchy of controls,” a series of policies and practices which we know prevent spread—like washing your hands for at least 20 seconds and always wearing an N95 respirator when treating people.

Governments at different levels must help health care facilities get resources to put these controls in place, especially sufficient quantities of personal protective equipment, so that staff do not have to ration use. Governments must activate all resources to immediately provide proper surge support for emergency departments, wards, laboratories, and auxiliary staff. All parts of the system will be exposed, from surgery to maternal care. Government and health care facilities must provide restitution for additional work being done, including funding for additional staff, overtime, breaks, and sick leave. Mistakes happen when staff are exhausted.

Health care workers must be able to prioritize their own physical and mental health, follow infection prevention and control protocols no matter how busy or critical a situation is, and manage each patient one by one. They must also be able to get rest and exercise and feel that their family is secure.

When the story of this novel coronavirus is written, let it be one where we learned from our mistakes, both as the virus spread, and from past epidemics, and one where we did all we could to value the lives of those who risked and sacrificed their own health to care for us. Let the story show that we provided resources where they were needed, when they were needed. And, let’s invest in our health systems, our public health workforce and epidemic preparedness because, inevitably, this will not be the last fight against dangerous pathogens that our frontline heroes will have to fight.

Amanda McClelland is the Senior Vice President of Prevent Epidemics and Resolve to Save Lives at Vital Strategies.