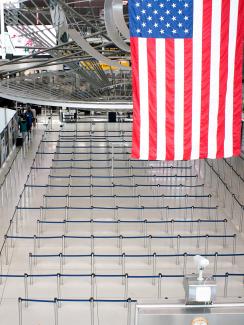 Signs of reduced travel can be see in the empty lines to reach a TSA immigration checkpoint at one of the terminals at the John F. Kennedy International Airport in New York on March 9, 2020. REUTERS/Eduardo Munoz
by Samantha Kiernan, Madeleine DeVita, Thomas J. Bollyky April 7, 2020

Based on government statements, official state media stories, and reporting from mainstream independent journalism outlets, Think Global Health has identified ninety-six countries and territories that have imposed some form of travel restriction against China during the COVID-19 outbreak. Restrictions include:

WHO discouraged travel bans during Ebola, in part due to potential to create “false impression of control”

During the 2014 Ebola virus disease outbreak, the World Health Organization discouraged the use of travel bans, in part, because of their potential to create “a false impression of control”—a misperception that the ban was sufficient to stop the spread of disease. There is also limited research to support that travel bans helped minimize the spread of four other emerging infections earlier this century, including the coronaviruses the Middle Eastern Respiratory Syndrome (MERS) and Severe Acute Respiratory Syndrome (SARS).

On January 30, WHO declared the outbreak of COVID-19, the respiratory disease caused by the novel coronavirus originating in China in 2019, a public health emergency of international concern (PHEIC). Since doing so, WHO has not recommended travel or trade restrictions against China or other affected regions, and in updated guidelines on managing ill travelers and considerations for quarantine has yet to recommend any restrictions on trade or travel. As of March 27, the WHO indicates that 136 nations reported health measures that interfere with international traffic, a broad measure that includes quarantine and any other restrictions that delay travelers more than twenty-four hours.

EDITOR'S NOTE: This story was originally published in March and updated in early April to reflect the latest data on reported cases from numerous countries.


Madeleine DeVita is an intern with the Global Health Program at the Council on Foreign Relations and a senior studying biology of global health at Georgetown University.