Go to homepage
EU: Strongly United for Health—Deeply Divided on the Economy
Trade 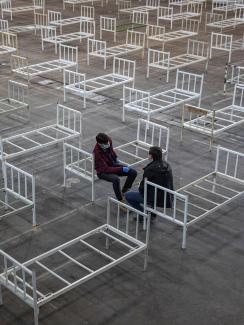 Volunteers take a break as they set up beds inside the Novi Sad Fair to accommodate people who suffer mild symptoms of coronavirus disease (COVID-19) in Novi Sad, Serbia, March 27, 2020. REUTERS/Marko Djurica
by Ilona Kickbusch and Susan Bergner March 29, 2020

As Europe enters full crisis mode as a key epicenter of the COVID-19 pandemic, EU member states are beginning to find an awareness of shared vulnerabilities in addressing health but still firmly disagree over the financial strategies required to fight its economic impact. In their meeting on Friday, March 26 the members of the European Council reiterated their commitment [PDF] to European solidarity and to five priorities but deferred the decision on key economic instruments by two weeks.

First you try and save yourself—then you realize that you need your neighbours, said Ylva Johansson the EU commissioner for home affairs. Under the leadership of Ursula von der Leyen, the commission’s president, member states have been cajoled, pushed, and bullied into solidarity.

We must not have twenty-seven small hearts, but one big European heart

We must, she said, “not have twenty-seven small hearts, but one big European heart.” For a short period even the Schengen agreement, which allows EU citizens to travel freely across borders, was endangered because of the unilateral shutdowns at some of these borders. Now the problems related to the movement of goods and people is being addressed as a priority. A big step forward is the joint procurement for personal protective equipment, ventilators, and testing supplies—and the increase of budgets for stockpiling medical equipment.

In health EU countries are now more willing to support one another.  Croatia facing an earthquake amidst the Coronavirus crisis has activated the EU Civil Protection Mechanism, and four countries have already sent them equipment.

Germany has provided medical supplies to the Italian government and is treating intensive care patients from Italy and France. But the future will bring tough questions on the extent to which member states are willing to give the EU more health competency. Under the Treaty of Lisbon, public health is a policy area where the union supports, complements or supplements [PDF] the actions of the member states. However, common safety concerns in public health matters are an area where competence is shared between the union and the member states (Article 4 TFEU). This dual nature of the competences in the area of public health hampers determined action in the case of a pandemic.

The EU has four core institutions under the Treaty of Lisbon, which forms the constitutional basis of the EU and entered into force in 2009:

Fighting the economic consequences is proving even more challenging. Many observers agree that the European Union is facing the biggest economic challenge of its existence. Initially on the economic front, there was extraordinary movement with resolute action by the European Central Bank in announcing a €750 billion stimulus package. There was agreement to accept the unprecedented use of the general escape clause under the Stability and Growth Pact, which will allow member states to undertake measures that depart from the budgetary requirements that would normally apply under the European fiscal framework.

This in principle means that the strongest economy, Germany, would need to assume liability for the debt of all other Eurozone members

But the embrace of this escape clause is not considered enough: the economies of Italy, Spain, and Greece face economic ruin, which led nine EU member states to call for “Corona Bonds” in a joint letter—a chorus that resonated as the group calling for these bonds now encompasses fifteen states. The Italian Prime minister has called for a European recovery and investment plan, which would include the issuance of common Eurozone debt to combat the crisis. This in principle means that the strongest economy, Germany, would need to assume liability for the debt of all other Eurozone members. Chancellor Merkel together with The Netherlands, Austria, and Finland still maintains that countries should rely on the EU’s bailout fund.

The pressure—especially on Germany—will mount as the crisis gathers speed, and the EU has given itself two weeks to sort out this dilemma. Even Jacques Delors, the former European Commission president, has come out of retirement to warn of the deadly danger for the European Union.

Fighting a Battle of Narratives

But the European Union is not only fighting the virus, it is also faced with a battle of narratives. As always, member states are quick to lay the blame at Brussels' door when things don’t work—a reactive and usually effective way of deflecting from their own mistakes. Indeed, in true Brexit spirit, a U.K. newspaper went so far as to suggest the completely unsubstantiated conspiracy theory that it was the EU—meaning chief negotiator Michel Barnier—who infected British Prime Minster Boris Johnson with the virus.

The fear remains that strategic European companies are exposed to takeovers. All this has to China’s activities, being dubbed “mask diplomacy”

“We have also seen attempts to discredit the EU as such and some instances where Europeans have been stigmatised as if all were carriers of the virus” said the EU High Representative Josep Borrell. The communication offensive by both Russia and China shows them as saviours of a Europe unable to act, jumping in to help desperate European states. This is a self-serving narrative on the part of Russia and China because a politically and economically weak Europe can serve the interest of both of those geopolitical players. After the European financial crisis [PDF], Chinese investors showed vivid interest in the economies that were severely affected, giving China more leverage in terms of investments and soft power. Keeping that in mind, the European Commission has now provided guidelines [PDF] for foreign investment screenings to preserve EU companies and critical assets. But the fear remains that strategic European companies are exposed to takeovers. All this has led to China’s activities being dubbed with a new name: “mask diplomacy”—but these machinations have been delivered a severe blow as a major portion of the 640,000 testing kits testing sent to Spain from China proved to be unreliable, as did masks that were sent from China to the Netherlands.

Trying to Maintain the Common Values

While facing the COVID-19 crisis, the European Union has adopted [PDF] a new action plan on Human Rights and Democracy for 2020–2024. But it is very concerning to note that at least six European countries intend to deviate from the European Convention on Human Rights in view of the pandemic. This retreat on human rights commitments is alarming when vulnerable populations within the EU need support more than ever. Social inequalities are amplified in times of crises; thus, special attention has to be paid to Sinti and Roma populations as well as refugees residing in Europe. The EU also has not resolved the issues about the conditions in camps for 42,000 asylum seekers on the Greek islands.

The EU should present guidelines on the social impact of restrictive public health measures and propose respective countermeasures. A forthcoming report of the European Union Agency for Fundamental Rights might provide evidence-based input. An effective health response is anchored in human rights but is faced with a number of EU member states that are becoming more authoritarian.

Social impact assessments would also allow the EU to take a broader perspective beyond an ad-hoc crisis management approach. Member states are beginning to recognize the importance of recovery and a mid-term strategy. The EU Council [PDF] has asked for propositions of the European Commission regarding exist strategies and future crisis management systems. Now is the time to propose ambitious ideas. Strengthened EU competences in health crisis and a solid investment in resilient and sustainable health systems on EU level are key for handling future outbreaks. A monitoring of health system inequalities at EU level needs to be introduced.  All this calls for an increase of the health component in the next multiannual financial framework.

Being a Responsible Global Player

On the international front, the EU Council reiterates that it commits to international cooperation and multilateral solutions. But if the EU wants to be a global player and a reliable partner in global health, it has to proactively shape an international response to the COVID-19 outbreak. The Union’s focus on saving itself and the need to juggle member states needs and interests have hampered its ability to act at the international level. The EU should respond decisively to the United Nation’s appeal to support states with weak health care systems and maintain or even increase humanitarian aid programs. The Union and its member states will need to expand their rediscovery of solidarity in health inside the EU to a global scale if they want to live up to their values and principles.

Following the G20 Leaders' videoconference, European Commission President von der Leyen and EU Council President Michel reinforced the need for global cooperation in health and for the economy—in particular to keep trade flows and supply chains open, especially for medical equipment. Working together with international partners such as the African Union might help to foster trust and bring hope into multilateral mechanisms in health crisis—and follows self-interest. Another major health crisis in the neighbouring continent would affect the European Union dramatically.

A first focus of the EU has been on the need to share scientific information and a commitment to accelerate European research to contribute towards a COVID-19 vaccine. Next to the €140 million already mobilized for research, von der Leyen has raised the possibility of an online pledging conference to ensure adequate funding to develop and deploy a vaccine against COVID-19.

Now is the time for the EU to promote sustained efforts in the international realm and to be at the forefront of strengthening the World Health Organization—not only by words but by deeds. With Europe having become one of the epicenters of the pandemic, the relevance of coordinated global health action and the support of global public goods has become more obvious, international organizations like the WHO are not development agencies—they set norms for and support all countries. As a consequence, the EU and member states should push towards a solid funding of the WHO and aim at an ambitious update of the international health regulations (IHR), which have largely been ignored within the COVID-19 crisis. The EU has yet to prove its strategic autonomy and multilateral spirit in the field of global health.


Susan Bergner is associate at the German Institute for International and Security Affairs.