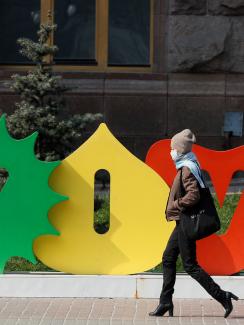 A woman wearing a mask during the coronavirus pandemic walks along the empty main street Khreshchatyk in central Kyiv, Ukraine on March 30, 2020—a colorful sign behind her bears the name of the city. REUTERS/Gleb Garanich
by Judy Twigg April 6, 2020

Three health ministers in under a month—a long-planned leap forward for hospital reform that kicked off on April 1—far-reaching agricultural and banking legislation passed to unlock an $8 billion line of credit from the IMF—and an ongoing war with Russia in the East defining the front lines of European civilization that hasn’t slowed down a bit. Ukraine has a lot on its plate right now, and its challenges with coronavirus are just starting. Western democracies have many reasons to pay attention.

Ukraine has a lot on its plate right now, and its challenges with coronavirus are just starting

So far, Ukraine’s COVID-19 burden appears relatively low, just over 1,300 reported cases. At first, Ukraine was a COVID-19 response champion. It was one of the first countries in Europe to shut things down internally. By the second week of March, before its number of confirmed cases reached double digits, it had imposed a nationwide quarantine, closed most public spaces, and cancelled international passenger flights into and out of the country. But that’s where things stopped. Officials in Kyiv seemed to believe that the quarantine was all they needed. The transition to preparedness—training of hospital staff, mobilization of equipment, coordination at the national level—has barely started. The setting of a strict deadline for Ukrainians abroad to return by March 28 didn’t exactly encourage proper physical distancing; thousands of people swarmed entry points from Poland to make it back in time. Even the flight ban had gaping holes.

The national testing regime for coronavirus is anemic. Back in February, the World Health Organization brought in reagents from Germany sufficient to test 950 people, but those were used up quickly on government officials and others in privileged positions. Since then, tests have been performed almost exclusively on people already sick enough to be hospitalized, leaving the country with little good data on actual spread. A new study from the London School of Hygiene and Tropical Medicine situates Ukraine near the bottom of ranked countries for percentage of symptomatic cases actually reported, at 10–20 percent. Front-line medical personnel describe surges in pneumonia, at rates exceeding comparable time periods in prior years, without the capacity to confirm whether these patients have coronavirus.

A new study ranks Ukraine near the bottom of countries for percentage of symptomatic cases reported, at 10–20 percent

The absence of a coherent government communications effort has left the public with little reliable information on what’s happening and how they should behave. Most of the confirmed coronavirus cases so far, for example, have been among the thousands of vacationers and labor migrants who returned from Europe in the early days of the pandemic. They were told to self-isolate, but they weren’t told precisely what that means, and many interpreted it as  limiting their welcome-home parties with friends and family to their homes. Entire villages have seen increased caseloads as a result. The extent to which Ukraine’s epidemic is likely to spread depends on adherence to current stay-at-home mandates. This is not a cause for optimism. During last weekend’s nice weather, people continued to crowd Odesa’s beaches and Kyiv’s riverbanks.

The Ukrainian Ministry of Health has been far from the front lines of this battle. Instead, there’s been a chaotic revolving door of health ministers and deputy ministers.

President Volodymyr Zelensky replaced almost the entire government, including the highly effective previous health minister, Ukrainian-American Ulana Suprun, when he assumed office last summer. Suprun’s successor, Zoryana Skaletska, seemed paralyzed for six months, failing to assemble a team or even sign basic documents until finally she was removed as part of yet another government shake-up. The health minister who came next, Ilya Yemets—who assumed the position on March 4—was even worse, achieving notoriety and public scorn for making unfortunate statements that called retirees “corpses” and said that the government shouldn’t waste money trying to save them. He was sacked after about three weeks and replaced by Maksym Stepanov, a former governor of Odesa with a reputation for being a strong manager—but also a history of suspected corruption. Years of accumulated capacity from a skilled health ministry team in place from 2016-2019, including immediately relevant pandemic preparedness planning, have been shunted aside. It took until last week, for example, for the ministry even to issue clear guidelines for hospitalization versus outpatient treatment for people who show signs of illness.

As everywhere, equipment is a problem. Reports on the number of available ventilators nation-wide vary, from under 2,000 to around 3,500. The good news is that most of these are in working order. There’s even talk of dusting off blueprints dug up from a long-defunct, Soviet-era factory in Kyiv that could enable domestic ventilator production. The bottlenecks are with everything else: trained personnel, especially anesthesiologists, monitors and supplies (including the oxygen itself) that keep the ventilators functioning, laboratory capacity, and most of all, personal protective equipment for health workers. There is already a slew of anecdotal reports of doctors and nurses becoming infected.

Reports on the number of available ventilators nation-wide in Ukraine vary, from under 2,000 to around 3,500.

There is no national strategy to overcome these shortages. Everything is decentralized and dependent on the initiative and competence of local and non-governmental leadership. The government’s sale of millions of face masks to other countries in January and February, at bargain prices, sparked a national scandal. And now, as was the case during the 2014 Maidan revolution and subsequent war with Russia, civil society and the private sector have stepped into the vacuum left by government inaction. Individual businesses and regional governments all over the country have been joining the global queue for ventilators, personal protective equipment, and other supplies from China. Sadly, they’re often competing with one another for scarce goods, and they’re sending out cautionary messages about the risks of fraud in these transactions. The Kharkhiv region, for example, recently purchased thousands of coronavirus tests from a Chinese firm but instead received garden-variety influenza tests. Non-governmental organizations—not surprisingly, given the vibrancy of Ukraine’s civil society—are stepping up as well, with donations of money and equipment and also in coordinating roles. The heroic Patients of Ukraine NGO, for example, has created a website and mobilized volunteers across the country to marry supply and demand of personal protective equipment for health facilities including the 240 hospitals recently designated to take COVID-19 patients.

Some sub-national government leaders have also impressively taken the reins. In the Chernivtsy region, for example, where the number of reported cases is disproportionately high, the authorities are testing everyone who’s symptomatic, isolating people who test positive, and following up on their contacts. Given the low reliability of the Chinese-manufactured tests they’re using, they’re only releasing people from self-isolation after two negative tests. And Lviv, one of Ukraine’s wealthier regions, has purchased a large number of express test kits on its own and launched mass testing of doctors, bus and tram drivers, and social workers, among others.

Everyone now knows which doctor to call if they start to get sick, and those doctors have clear, consistent clinical protocols to follow

An overhaul of the entire health financing system, inaugurated in mid-2017, has situated doctors and patients across the country better than they might have been otherwise. The first phase of reform transitioned primary care physicians from an inefficient, often corrupt budget financing model to capitation payments that required every Ukrainian to sign a contract with a primary care physician. In sharp contrast to three years ago, everyone now knows which doctor to call if they start to get sick, and those doctors have clear, consistent clinical protocols to follow. The reform also created a contracting agency, the National Health Service of Ukraine, that manages all the payments and has transitioned the entire system to digital data and money transfers. The next leg of the reform covering hospitals, long planned to take effect on April 1, is proceeding, and it’s too far along to pause in the midst of a pandemic. This step was initially intended to reward facilities that actually serve patients well and—eventually—to encourage the downsizing or closure of wasteful excess capacity.

That latter element, necessary for the sake of efficiency but likely to be painful in the short term, is on temporary hold during the COVID-19 crisis. Instead, all hospitals will maintain a base level of funding from the National Health Service, and some—the ones with real skill and capacity—are getting more money. In anticipation of these additional resources, a few are already asking how and where to place orders for ventilators. But disturbingly, even with a reform-driven boost in hospital workers’ salaries this week, some hospitals are angling not to receive COVID-19 patients, and some facilities are seeing resignation rates as high as 50 percent—all for fear of the surge that’s coming. The business community is coming to the rescue here too, with top-off payments of around $250 a month (which goes a long way in Ukraine) to retain thousands of medical personnel. And perhaps most importantly, the National Health Service of Ukraine is the only institution maintaining a coherent, up-to-date public database on the pandemic itself and Ukraine’s infrastructure to respond.

Russia is using the pandemic as cover to escalate pressure on Ukraine, angling for concessions and “forced integration” of unrecognized territories

This is all happening against a backdrop of continued war with Russia in the eastern part of the country. Frankly, there’s little about Ukraine’s COVID-19 preparation and response that’s profoundly different from the challenges facing many other countries, but its geopolitical significance elevates its importance. Russia is clearly using the pandemic as cover to escalate pressure on Ukraine, angling for concessions and “forced integration” of the unrecognized territories without meeting Kyiv’s long-standing security conditions. Settlement talks are ongoing, raising fears among many Ukrainians that Zelensky will hide behind the pandemic while accepting terms favorable to Russia. A Ukraine weakened by coronavirus—current forecasts project a best-case GDP hit of 5–10 percent—will be more vulnerable than ever to Russian aggression. Ukraine’s American and European partners shouldn’t let such a valuable ally fall off their agenda.