Go to homepage
Russia’s Not Ready for Coronavirus
Trade 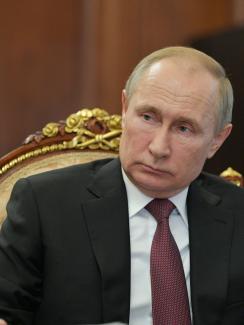 Russian President Vladimir Putin chairs a meeting in Moscow on preventing the spread of coronavirus in Russia on January 29, 2020. REUTERS/Sputnik/Alexei Druzhinin/Kremlin photo
by Judy Twigg March 6, 2020

Russia is surrounded by COVID-19. As of March 6, at least nine of its 16 neighboring countries have reported cases, and it shares a 4,300-km land border with China. Its own confirmed number of cases so far is in the single digits. There’s no evidence yet of community spread, and containment measures have been aggressive. But there is plenty of reason to worry about Russian infrastructure and capacity for mitigation.

The Russian government is borrowing quite a few pages from China’s harsh, comprehensive containment playbook. Non-Russian citizens traveling from the most affected countries are barred from entering the country. Air and land travel routes are shut down. Towns along the Chinese border, normally teeming with trade and tourism, are paralyzed. Health officials are doing random temperature checks among Moscow metro passengers. Large-scale public events, including the annual St. Petersburg International Economic Forum scheduled for early June, have been cancelled. Thousands of Russian citizens and foreign nationals entering from abroad are already under voluntary quarantine.

Almost 150 Russians evacuated from Wuhan early in the epidemic underwent a two-week isolation in Siberia’s Tyumen region in mid-February (their Instagram videos went viral before they were released). Others are still inside the 14-day waiting period. Contact tracing is ongoing and extensive. The health ministry is getting a brand new Moscow hospital complex ready for new cases. Moscow City Hall just unveiled its ready-to-implement emergency “Plan B,” which would feature widespread closures and disinfection of public spaces—public transport, restaurants, and shopping centers—every four hours.

Moscow’s mayor calls the monitoring, and ongoing “raids” of potential carriers of the virus, “unpleasant, but necessary.”

The deployment of Moscow’s comprehensive facial recognition system to catch quarantine violators has been declared legal by a city court. Rolled out this past December, that system will also see wide use when the authorities are looking to quell political demonstrations and protests. Surveillance footage has already nabbed one Muscovite woman who had returned from China and was en route from her apartment to a gathering with friends—as well as the taxi driver who took her home from the airport. Moscow’s mayor calls the monitoring, and ongoing “raids” of potential carriers of the virus, “unpleasant, but necessary.” The Chinese Embassy has asked city authorities to reverse orders requiring transit employees to call police if they think a Chinese citizen has boarded the train or subway, but profiling of people who look Asian persists. The head of Moscow’s consumer health protection agency announced a wide-scale roundup of stray dogs and extermination of rats, citing flimsy evidence about the impact of animal vectors. For over a month, an aide has been checking the body temperature of everyone who meets with President Vladimir Putin.

Putin has a particular interest in keeping this threat under control. The brutal economic consequences for Russia, as everywhere, are still unfolding: oil prices and futures are down, the ruble has dropped, the main RTS stock index has plummeted, the OECD has dramatically cut its forecast for the Russian economy, and PetroChina has declared force majeure on natural gas import contracts.

Vladimir Putin’s fourth term expires in 2024. Will coronavirus undermine his machinations to stay in power beyond 2024?

Putin’s sure to be keeping an eye on his public opinion polls. His previously soaring poll ratings have taken a hit ever since controversial pension reforms were introduced in mid-2018. His numbers are now lowest among residents of big cities—most likely to be affected by any broader COVID-19 epidemic—and poor people, least likely to have the means to access testing or care. Much of Putin’s recently-proposed constitutional reform revolves around social policy and popular new social guarantees like indexation of pensions and stability in the minimum wage. Failure to cope with the virus would threaten his legitimacy and undermine his current machinations to stay in power after his fourth term expires in 2024.

COVID-19 testing in Russia isn’t fast or reliable at the local level. Currently, coronavirus testing takes three steps: a first test by a local clinic or hospital, a second by a national surveillance agency, and the last by the Vector Virology and Biotechnology Research Center in Novosibirsk, Siberia, the country’s leading infectious disease research facility (famous for housing Russia’s smallpox samples, and for its cold war-era biological weapons research).

Waits for results can be long, and confinement during the waiting period isn’t always following World Health Organization protocols. By one account, a 29-year-old Moscow resident just back from a ski trip to Italy checked himself into a public specialty hospital, Infectious Diseases Hospital No. 1, in late February. There, he was placed in a ward with five other men—all also awaiting test results—who had recently returned from Italy, Iran, and South Korea. The hospital didn’t isolate them until they complained to the nurses that they could be infecting one another, and then hospital staff asked them not to tell anyone about the error. When that 29-year-old eventually was confirmed to have the virus, his doctor told him she couldn’t say for sure whether he’d caught it in Italy or from his ward-mates.

Despite significant levels of investment over the last decade, access to care has diminished since the Soviet period

More broadly, the Russian health care system is ill-equipped to handle a large influx of COVID-19 patients. Despite significant levels of investment over the last decade, access to care has diminished since the Soviet period, and improvements in quality have been far from universal. Corruption and convoluted incentive structures skew resource allocation decisions. A 2019 Russian public audit found that more than 40 percent of health care facilities have no central heating, over half no hot water, and almost a third no central water supply at all. While these numbers are probably exaggerated, including in the denominator support and storage buildings that shouldn’t be expected to have all the amenities, they’re surely indicative of the poor state of affairs outside major cities.

Even worse, downsizing of small rural hospitals and clinics, well intentioned in the name of efficiency and cost savings, has left 85,000 of the country’s 130,000 rural settlements with no health care at all. Ill-considered import substitution policies have forced HIV/AIDS, diabetes, cystic fibrosis, and cancer patients to scramble for access to effective medicines when imported drugs become unavailable and Russian generics don’t work.

The coronavirus is already particularly threatening to Russia’s disproportionately large populations of people with immune systems compromised by age or other medical conditions like infection with HIV or active tuberculosis. There’s no tradition of evidence-based medicine, or evidence-based policy in general, to inspire confidence in the national response.

Nobody is surprised to find Russia exploiting COVID-19 on social media. The State Department has detected thousands of coordinated, Russia-linked social media accounts, on multiple platforms in at least five different languages, claiming that the virus was cooked up in CIA bioweapons labs in an effort to enrich Western drug companies and bring down China’s economy.

As those rumors travel, they may ultimately hinder efforts of the global health community to respond to the epidemic in Africa and Asia.

Mainstream Russian news talk shows are pitching in to this coordinated media ecosystem, carrying messages intended to sow confusion, doubt, and misinformation. One of the state-funded national television channels even hinted that the name “coronavirus”—derived from the Latin corona, or crown—refers not to the crown-like spikes on the surface of the virus, but to the fact that U.S. President Donald J. Trump used to crown beauty pageant queens. As those rumors travel, they may ultimately hinder efforts of the global health community to respond to the epidemic in Africa and Asia. And they’ve already backfired inside Russia itself: Moscow’s “Group-IB” security firm says it’s currently tracking a bot that’s spread more than 12,000 fake posts on VKontakte (Russia’s version of Facebook) and several instant messaging services, all claiming that the Kremlin is hiding more than 20,000 COVID-19 patients somewhere in the capital.

A Russian man who lives in a Chinese border town recently said he wasn’t worried about COVID-19 because “two hundred grams of vodka would kill any virus.” That might be a classic Russian coping strategy, but it won’t do much for actual epidemic mitigation.

Putin spokesman Dmitry Peskov recently called Russia an “island of stability in an ocean of turbulence,” referring broadly to seas of political upheaval and unrest around the world.

The Russian government desperately wants to hold up COVID-19 as a shining illustration of this point. But it’s not hard to envision a larger number of cases starkly exposing the fragility of Russia’s health and social safety nets. If, despite containment measures clearly intended to stay ahead of the curve, community spread takes off, the economic and political fallout (in addition, of course, to the human toll) will be worth watching. Recent nationwide demonstrations confirm the resilience of the country’s small but determined political opposition. With slumping favorability ratings, Putin’s political armor is already showing signs of wear. Failure to handle a widespread epidemiological crisis could trigger broader questions about the competence and stability of the regime.