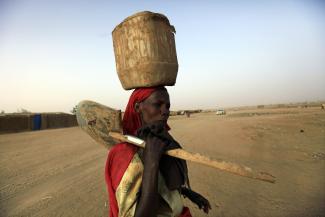 Shocked by the images of brutal genocide in west Sudan in 2004, compassionate people around the world, including school kids, joined the cry to "Save Darfur!" In the seventeen years since the international community opened its hearts and pocketbooks, the body count has continued to rise, and the root causes of a now-forgotten crisis remain largely unaddressed. Despite thirteen years of UN Peacekeeping and tens of billions of dollars spent in aid, violence and conflict-driven displacement are nearing a ten-year high in Darfur, Sudan.

The United Nations–African Union mission in Darfur (UNAMID) patrol ended on January 1, 2021, leaving behind a security vacuum in the northeast African nation. Since UNAMID's mandate termination, humanitarian needs and bloody inter-communal violence across the region escalated, displacing an estimated 260,000 Darfuris, more than four times the number of Darfuris displaced by conflict in all of 2020 and the largest figure reported in Darfur since 2014.

The conflict driving this mass upheaval is largely characterized by accumulated ethnic and tribal divisions that were manipulated by the Bashir government and inflamed by rival militias. However, climate change is a conflict multiplier, driving competition between farmers and herders, especially for land, and fueling the violence across the region. Any comprehensive solution to the violence and instability must extend beyond a political treaty and address the future of land use and climate adaptation.

Before creeping desertification and drought took hold in the region, most Arab herders and settled farmers had an established modus vivendi. They got along, maintaining the symbiotic relationship of traditional agricultural patterns and nomadic activity. But climate change unraveled that.

The impact of climate change was not immediately recognized. The southward expansion of the Sahara Desert by almost one mile every year and declines in median annual rainfall by 15-30 percent  occurring decades before the outbreak of the 2003 war in Darfur forced farmers to change their practices. For example, they now assert exclusive control over previously shared commons, such as land and water. This shift in land use bars herders from traditional grazing areas and erodes the longstanding interdependent relationship between the two groups, gradually leading to bloodshed. As the landscape evolves and established grazing and pasture corridors shrink, protracted conflict has become what many international observers label "the first climate change conflict."

Today, Darfur is suffering from a deepening climate crisis. In addition to raging violence, the dry seasons are longer and hotter, and the rainy seasons less predictable, jeopardizing life sustaining crop yields and worsening existing food insecurity. While a promising sign of hope for the region after nearly two decades of war, refugee return and integration emerge as alarmingly challenging. Many refugees have returned home only to find that their homes are now occupied by members of the tribe that forced them to flee. Environmental degradation and desertification further reduce the availability of arable land while the demand continues to increase.

The Juba Peace Agreement of 2020 was supposed to calm the multiple crises, calling for lands to be returned to original occupants. However, this arrangement threatens some communities with displacement. These disputes over land rights are intensifying as climate change reduces land availability, competition for land grows as refugees return, and exploitable resources are discovered, like gold deposits, in North Darfur.

Experts warn low- and middle-income countries around the world, specifically in sub-Saharan Africa, are rife with tinder for climate change conflict

Despite the Juba Peace Agreement, the nightmare for the people of Darfur only deepens. Still, the underlying multifaceted drivers of the complex crisis remain unaddressed, leaving the future for peace in Darfur uncertain while every day, more innocent lives are being buried in the expanding desert.

The thin hope for democracy has been crushed by the recent coup and military seizure of power on October 25, 2021, despite the reinstatement of the civilian government on November 21, 2021. Over these weeks, mass violent episode erupted in Darfur, displacing upwards of 5,000 people. In the aftermath of the coup, it is no wonder that many Darfuris fear that the Sudanese government can't cope with the crisis. Afterall, for many young Darfuris internally displaced in camps, hope and livelihoods are grievously lacking. And with the UNAMID exit, humanitarian agencies are no longer present or able to help in the way they could a decade ago, leaving Darfuris desperate and frightened.

The violence in Darfur may be the first official climate change conflict, but it will not be the last. Experts warn low- and middle-income countries around the world, specifically in sub-Saharan Africa, are rife with tinder for climate change conflict. In anticipation of increasing climate change-fueled conflicts, donor nations in consultation with humanitarian actors must learn the painful lessons of the failed international mission to save Darfur. Lessons learned demand that we prepare to invest heavily in community resilience building, support livelihood systems, and address the climate factor head-on.

Sydney Kamen is a passionate humanitarian and geographer. With years of global health experience in sub-Saharan Africa, she is now completing her master's at the Harvard Kennedy School of Government.

The Resilience of Women in Sudan

Halcyon summers have given way to famine, conflict, and loss