Go to homepage
The Resilience of Women in Sudan
Gender

The Resilience of Women in Sudan 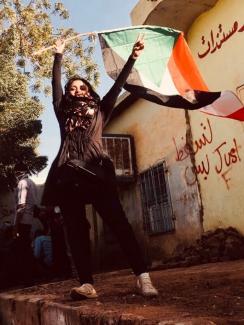 Sarah Khalifa, a physician from Sudan, protesting during the early days of the December 2018 revolution in the Khartoum district of Burri, in Sudan. Photo courtesy of Israa Osama
by Karen Sherman November 10, 2021

Long shifts and brutal hours are to be expected for most young doctors. But for Sarah Khalifa, 31, weariness stems from a different place altogether: deep concern for Sudan, a country where she was raised and studied medicine. A military coup that toppled the transitional government of Sudan occurred several weeks ago and is taking a toll on a population already under deep duress.

Khalifa was born in Egypt and raised between Oman and Sudan. She graduated with a bachelor's degree in medicine and surgery from the University of Medical Sciences and Technology in Khartoum, the capital of Sudan. Khalifa left the country at the end of 2019 to pursue her internal medicine training in Ireland, but she has been back to Sudan several times and plans to return again in December.

As a doctor and activist, she has seen firsthand what's at stake for Sudanese people, and she is especially concerned for its women. It’s a country where men are the traditional decision makers and child marriage and gender-based violence are the norm; where women have crushing domestic responsibilities and often lack the skills and access to economic opportunities that could better their lives. In an interview conducted by author and activist Karen Sherman for Think Global Health, Khalifa spoke of the prospect of a different future for Sudanese women.

Karen Sherman: Let's start with what is happening on the ground in Khartoum right now. What can you tell us?

Sarah Khalifa: A coup took place on October 25 organized by military leaders. They dissolved the transitional sovereign council and civilian government. The prime minister was arrested as well as other ministers and political activists. The Sudanese people are protesting to resist this move by the military. Calls have been made for national disobedience and the internet was shut down to hide the military's brutality and human rights violations. Reports from the Doctors Central Committee confirm that fourteen innocent lives have been lost since the coup began and many protesters have been injured.

These events have put extraordinary pressures on health-care services, which were already struggling. It's very chaotic. The minister of health has been prevented from exercising his duties—stopped by the military coup forces. Hospitals are poorly staffed and now working beyond their capacities, with hundreds of injured and critically wounded protesters on top of existing patients.

People are still going to public and private hospitals, but the hospitals are only working on emergencies. Those who are injured are prevented by General Abdel-Fattah Burhan and his forces from entering military hospitals and protesters have been shot. They’ve also stopped staff in the main blood bank from doing their work.

Karen Sherman: What has it been like for you, personally, over the last month?

Sarah Khalifa: The last two weeks have been very stressful for me and, of course, for every Sudanese person living abroad. I've been trying to be in constant communication with my fellow activists and family there, which is difficult due to the lack of internet and telecommunications. I haven't been able to work properly since the crisis started and had to take leave. I plan to go back to Sudan as soon as possible.

Karen Sherman: How did you come to be a doctor in a society where women are historically undervalued?

Sarah Khalifa: I still remember listening to stories of how women were successful and valued before the previous regime took over. I think that, in combination with the fact that two of my brothers are also doctors, influenced my decision to pursue a career in medicine. I want these stories of women from the past to become a reality in today's Sudan. I believe the time will come where we can live to see women make history again.

Doctors are doing a great job in Sudan, though it's not very rewarding for doctors' salary-wise. Also, it is very difficult to access medical training due to the lack of funding from the previous government. I was always interested in a specialty that would allow me to do field work. I wanted to train in internal medicine and obtain a master's degree in humanitarian medicine to facilitate this.

I've since become a member of the Executive Committee of the Sudanese Doctors Union in Ireland, working to build support outside of Sudan, while also working with my colleagues in the Sudan Doctor's Committee and the Unified Doctors' Office, a coalition of medical trade unions in Sudan. We are currently calling for a doctor's strike in response to the coup and for civil disobedience to demand that coup leaders hand over power immediately to civilians, without compromise or negotiation.

Karen Sherman: Tell me about your experiences as a female activist. What has that been like for you?

Sarah Khalifa: I loved being in the streets and attended every single protest in the December revolution. I was also a coordinator of several field and mobile clinics during the protest and the sit-in. Part of my job was to staff the mobile clinics and count the daily injuries.

When we were attacked, it was a blessing to be a doctor because at least I could distract myself from the brutality of what I was witnessing. People were being shot in front of us. I was a doctor first and a protester second. We carried the injured to the nearest hospitals. When we did that, you actually don’t know if you're going to make it, if you are going to survive. It's something that I cannot explain. You are sad that it's coming to this brutal end, that we did not deserve this brutal ending.

After six or seven attacks, though, anger overtook my fear. As a doctor, I felt responsible to protect and save. Whatever I can do, however I can help at any stage, I will do.

Karen Sherman: What are the roots of these current protests?

Sarah Khalifa: There had been months of street protests starting in December 2018, in which women played a prominent role. These ultimately led to the ouster of dictator Omar al-Bashir and his government in April 2019. The Khartoum massacre in June 2019 was a turning point, where youth protesters were shot, lashed, and assaulted by security forces, including the Janjaweed, the militia group responsible for the mass killings and rapes in Darfur.

These same military leaders are in-charge and responsible for the situation today. We believe members of the military and rapid support forces must be held accountable for their systemic attacks against civilians and for blocking medical treatment. There are crimes against women, too—these are crimes against humanity. We are demanding a return to civilian rule, freedom for detainees, justice for victims as well as women’s rights.

Karen Sherman: When it comes to women's rights, how are women faring with the military coup and current protests?

Sarah Khalifa: There are a lot of physical attacks. The fact is there is very little data. It's a very sensitive thing to talk about, and women won't talk about it easily.

There has been a recent change to the personal status law in Sudan, which covers family relations inclusive of marriage, divorce, custody issues, etcetera. This law previously gave men the right to decide on everything. This change is a positive step for women, but we still have a long way to go.

Karen Sherman: What have these protests meant to you as a young woman, and to young people more broadly in Sudan?

Sarah Khalifa: While the latest conflict is devastating on many levels, I believe it is also inspiring hope in many young Sudanese people. They have only lived under a dictatorship and have dreamt of a different life, one where basic civil rights are respected and women are free to do whatever they want to do.

Honestly, Sudan is very special. The people deserve to start living a different life. We need to get rid of dictators and be led by a civilian power. If that were to happen, Sudan would evolve, get back to what it was—even better.

The revolution and sit-ins made people take notice of women, to recognize how strong Sudanese women are

Karen Sherman: What has been the response to women being so visible and vocal in all of the protests?

Sarah Khalifa: I think people were surprised to see women being frontliners, but I wasn't. The revolution and sit-ins made people take notice of women, to recognize how strong Sudanese women are, how capable they are of doing the same jobs as men. The protests have given a lot of credibility to women. I know the term resilience may be overused, but women are very resilient, given what they have been through. I know what women are capable of.

Karen Sherman: What do you wish for the country's women?

Sarah Khalifa: Equality, and more opportunities for women to shine. They were oppressed in the previous regime but are slowly gaining the confidence to take on larger leadership roles.

Karen Sherman: Hundreds of thousands of Sudanese returned to the streets this past weekend and show no sign of giving up the fight for civilian rule. What’s next for Sudanese activists?

Sarah Khalifa: In some ways, the protests are a microcosm of what life could be like. During the sit-in, people worked together. They managed to do the impossible. Every single person had three meals, a place to stay. We were one big family, with people doing everything for each other. It was a very pure and healthy environment because people were united around a specific goal. They can do that again.

Karen Sherman is the president of Akilah, an East African institute for women's leadership and career development. She is also the author of Brick by Brick: Building Hope and Opportunity for Women Survivors Everywhere, published in 2020.