Go to homepage
Gaza and the West Bank: Reflections From a Psychiatrist
Poverty 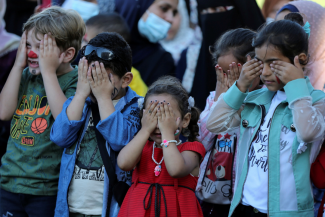 Juan Paris has been working in Gaza and the West Bank for almost a year. The Doctors Without Borders/Médecin Sans Frontières (MSF) psychiatrist spoke with Think Global Health earlier this month, shortly after a ceasefire in the region ended eleven days of violence between Israel and Gaza, killing hundreds. Paris discussed the complex challenges of treating people who are coping with multiple medical and emotional traumas, and how the recent conflict has affected his work.

Think Global Health: What type of work have you been doing since you began your job in the region in August 2020?

Juan Paris: I'm a specialized type of physician, and I provide support to different projects in the West Bank and in Gaza. What we’re doing at MSF within the West Bank is mostly mental health. We have two health clinics—community mental health clinics—that have a more multidisciplinary approach to them, with a medical arm, social workers, and psychologists as part of the treatment team, but with psychotherapy as the core focus. Within Gaza, my work is more medical-surgical types of interventions with mental health as a key component of care—it's a holistic approach.

"Gaza only has one psychiatrist. The only other one was killed during this war"

Think Global Health: What are the mental health care needs there?

Juan Paris: The need is huge in Gaza. Initially, the greatest needs were for young men who had been injured in the Great March of Return, who had life-changing injuries—loss of limbs, infections, surgeries. They had had a loss of role in their families. Men who were the breadwinners of the family had suddenly lost any capacity to attend to their family's needs. We were also seeing big families condensed into small spaces, food insecurity, water insecurity—a huge amount of adversity piled up and once you opened the door providing care through the initial injury, you just saw everything that was behind it. We were seeing not just psychological trauma, but emotional distress linked to the reality of living in Gaza.

Now the clinics are open to the wider population and what we mostly are seeing now are children.

Think Global Health: Are there many mental health services available to people in Gaza and the West Bank?

Juan Paris: Palestine has a very big lack of psychiatrists and of specialized mental health professionals overall. Gaza only has one psychiatrist. The only other one was killed during this war. In the West Bank, there are eleven practicing psychiatrists within the public health system.

Think Global Health: What has your work been like since the ceasefire on May 21?

Juan Paris: Honestly, in the past few weeks, I've been mostly seeing my own colleagues. I've been doing staff support [for medical colleagues, most of whom are from Gaza]. They take on themselves the double burden of experiencing the war themselves and the blockade, plus having to expose themselves to the reality of seeing their own lives reflected in that of their patients.

"Even if you don't enact the change you feel should happen, at least the capacity to bear witness to their reality makes a difference"

Within an organization like MSF they might have access to salaries and job stability that very few others from Gaza are able to access. So they see people who went through the same things they did, but who also have the added layers of precariousness and food insecurity and gender-based violence and child protection issues and so on, so it's a double exposure.

Think Global Health: So they are experiencing everything others from Gaza have been through and trying to help as medical professionals, too?

Juan Paris: It's not only this war they've been through, it’s four or five wars over the last 14 years. It’s also the bombings that randomly or every now and then fall, it’s the blockade, the occupation before that. So it’s nonstop.

Something that weighs on them much more than anything is the blockade—the restriction of movement. In the first few days and weeks [after the recent escalation began], the conversation was a lot about the fear. The experience of horror. They speak about this as the worst escalation they've gone through and that there is no comparison. They even speak about the desire for "a more peaceful war" like the one in 2014—this is what they say.

Grown men and women speak about not ever having seen anything else but Gaza. And knowing and understanding that Gaza, the place that they love, that they are very much attached to, that they wouldn't want to leave, is also not fit for purpose.

Think Global Health: How do you function as a professional each day and feel like you're making progress?

Juan Paris: It's very difficult. It takes a toll. I guess the only strategy is that I put things into context. I know I can step away from this. I have the opportunity and privilege to go outside and to access all the things they can't. So, if I have to take the brunt of this process right now, it is because of the possibility of unloading it later.

Even if you don't enact the change you feel should happen, at least the capacity to bear witness to their reality and to represent their reality in a way that's fair to them, it makes a difference for them.

Something that is difficult and that weighs on people from Gaza is the misperception around the world of them either as victims or as hostile people, war mongers or terrorists or whatever. They definitely don't see themselves in any of those positions. There are very few societies around the world that have survived more war and more adversity than them. Resiliency is defined by people from Gaza. But at the same time, they know that and they understand that they need help.

Think Global Health: What can the world do to help?

Juan Paris: That may be politically complicated, so if we focus specifically on trauma, and if we weren't thinking specifically about Gaza, something that a trauma survivor needs, or someone who has gone through an especially traumatic experience or interpersonal violence, is one, the certainty of safety. So the possibility of non-repetition and some control and predictability over their long lives and the possibility of a future. Two: justice. Three: some sort of reparation.

Without access to any of that, healing from trauma is a huge challenge. It's an uphill battle. I'm not going to say it’s impossible because some people heal from trauma and some people have very impressive post-traumatic growth, and I think Gaza society is an example of that.

Think Global Health: How are the children of Gaza doing?

Juan Paris: It's a sad situation. It's a very sad situation because almost half of the population of Gaza is under 14. They know nothing different than the blockade and during it, all the full-blown escalations, plus the bombardments. If it were just about one war these kids had to go through, that would be horrific enough. No kids should go through this many. This is the environment in which they have to develop.

If you go through this process of being attacked regularly, you are always in survival mode. Children developing in an environment where survival skills are what need to be applied to overcome each day, they are not in a situation where they can be reflective about their lives. There will be increasing mental health needs and it will be a challenge meeting all these needs in order to counteract the effects of trauma.

Think Global Health: You've just lived through air raids, too. How are you doing?

Juan Paris: I'm a little bit tired and a little bit frustrated and angered by the situation. If it makes me feel powerless, I cannot imagine where my colleagues [from Gaza] stand. I try my best with the support of the people around me to really put things into context enough to stay focused. What sustains me is a regular group meeting with my colleagues. I see so much care in them and a quick capacity to understand and reach out. That also defines what makes them so resilient. They build these nets among themselves, too, and have a very strong sense of community and society that holds them together. If you stay long enough they will include you in this net. And I also benefit from this process.

It's very difficult to hurt the fabric of society here because it is so strongly knit. But things like, for example, this psychiatrist who was killed, he was from a family that also had an internal medicine doctor who was a leader of the COVID response within Gaza who was one of the main teachers of most of the doctors in Gaza. And he died. Every time you bring down one of these pillars of society you hurt the fabric of a family, a community. Hopefully it’s not visible enough or it’s not enough to break them apart.

The fact that there are people here who are able to overcome and go on to become massively capable professionals, it's mind-blowing.

Dr. Paris, who is from Venezuela, will finish his mission in Gaza and the West Bank for MSF in July.