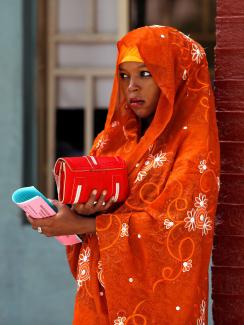 The concentrated global effort to use vaccination as a child survival strategy began when the World Health Organization (WHO) launched the Expanded Program on Immunization in 1974. More than four decades later, nearly all people in Africa (96 percent) agree that vaccines are important for children to have. The question to ask, however, is whether this high confidence in vaccines actually translates to high childhood vaccination coverage. This question matters because the mere existence of vaccines alone does not save lives—they must be actually administered through vaccination programs in order to protect children’s lives.

Spectacular Increase in Childhood Immunization, but What Drives Suboptimal Coverage?

An estimated three out of every four children in sub-Saharan Africa have received three doses of diphtheria-tetanus-pertussis-containing vaccines (DTP3), the yardstick for childhood immunization coverage. Compared to 1980, when only one out of every twenty African children received DTP3, this is a praiseworthy achievement. Improved vaccine financing, procurement, and delivery have expanded access to vaccines in Africa and have enabled much of the observed progress in childhood immunization coverage in the continent. However, over the last five years, there has been stagnation in coverage across the continent, with decreases recorded in some countries.

Currently one in four children living in sub-Saharan Africa misses out on benefits of vaccination, and this has been the case for the last five years, despite expanded access to vaccines on the continent. That is why the value which vaccines deliver today in sub-Saharan Africa remains far behind the substantially greater potential benefits they can offer. The current vaccination coverage in sub-Saharan Africa is well short of that required to prevent outbreaks, avert vaccine-preventable deaths, and achieve regional vaccine-preventable disease control and elimination goals. The mere availability of and access to vaccines are no longer enough to sustain immunization coverage at optimal levels.

Barriers to vaccine uptake are related to logistics, supply and access, social and cultural norms, lack of confidence, and vaccine hesitancy. National and regional immunization managers and other stakeholders in sub-Saharan Africa have indicated that vaccine hesitancy poses a growing threat in the region. Moreover, vaccine hesitancy has been identified by the WHO as one of the ten main threats to global health.

Social media tracking in South Africa has shown that one-fifth of South African social media users are vaccine hesitant. For example, on February 4, 2019, the Western Cape Provincial Department of Health's Facebook page announced the implementation of a school-based vaccination campaign to administer the first dose of the human papillomavirus (HPV) vaccine to nine-year old fourth-grade girls in public schools in the province. This announcement was met with a flurry of social media responses posted on the campaign's Facebook page.

One third of the comments were judged to be “vaccine hesitant,” as they contained various anti-vaccination messages. In addition, a recent survey of private schools in South Africa found that only about one in five (19.4 percent) of girls had received HPV vaccines, with 65 percent of the reasons for not accepting vaccination being related to vaccine hesitancy (personal communication from Professor Rose Burnett, Head of the South African Vaccination and Immunisation Centre, Sefako Makgatho Health Sciences University, Pretoria, South Africa).

In Africa, vaccine hesitancy has been fueled by false rumors and conspiracy theories. That misinformation has had dramatic consequences. Over the past two decades, vaccine-related rumors in different parts of Africa have led people to refuse recommended vaccines for themselves or their children, even when those vaccines were available. This made communities more susceptible to infectious diseases and resulted in multiple disease outbreaks, ultimately consuming resources and costing lives. For example, in Cameroon in the 1990s, beliefs that childhood vaccinations were being used to sterilize girls sabotaged the country’s immunization efforts. Suspicions of cholera immunization campaigns in Mozambique, rumors surrounding tetanus toxoid and other vaccines in various countries in East and West Africa, and increased public concerns about and refusal of vaccinations in Zimbabwe all suggest that vaccine hesitancy trends and risks are on the rise in Africa.

Rumors can degrade the confidence that the public has in vaccines, leading potentially to an increase in the levels of vaccine hesitancy. Indeed, many cases of vaccine hesitancy have been caused by rumors. For example, in 2003, political and religious leaders in Kano, Zamfara, and Kaduna States in Northern Nigeria boycotted the national immunization days organized in the context of the global polio eradication initiative. This was partly due to widespread rumors that the vaccines could be contaminated with anti-fertility agents, HIV, and carcinogens. This boycott in turn led to a five-fold increase in polio incidence in Nigeria between 2002 and 2006 and contributed to polio outbreaks across three continents.

The spread of rumors about vaccines can be understood as ”infecting” the minds of people in the population, leading to an acute increase in the rates of vaccine hesitancy and a decrease in vaccination coverage. This scenario can be likened to the way infectious diseases spread during disease outbreaks. As such, mathematical models that have been used to predict the spread of infectious diseases during disease outbreaks may be usefully applied to understanding how rumors spread and affect rates of vaccine hesitancy.

We Can’t Fix What We Can’t Measure

There is currently no gold standard for measuring vaccine hesitancy. While there have been several quantitative measures developed and qualitative investigations undertaken worldwide, there is no clear guidance for program managers in sub-Saharan Africa on which tools they should use and how to employ them in their own settings. Existing measurement tools have been developed predominantly in high income countries. Our pilot work on these tools has shown that careful adaptation is necessary, to make them appropriate for use in sub-Saharan Africa.

The currently available tools also fail to incorporate the multiple dimensions of vaccine hesitancy and are complicated, potentially discouraging their use in research and vaccination programs in Africa. There is thus a need to test, validate, and adapt existing vaccine hesitancy measures—and potentially develop new ones for application in sub-Saharan Africa. These measures need to be concise to facilitate their usage and comprehensive to enable an assessment and differentiation of the different aspects of vaccine hesitancy. Such validated tools will help to monitor vaccine hesitancy trends across places and over time, enhance the comparability of research results, and facilitate more evidence-informed interventions. They will also help monitor changes in vaccine hesitancy over time, to detect concerns early before they become explosive. Standardized measures will also lead to future research results that are more easily comparable (e.g. in meta-analyses), improve data quality over time, and facilitate the development of evidence-informed interventions.

At the South African Medical Research Council, we are filling these knowledge gaps by developing capacity for socio-behavioral insights and interdisciplinary research on vaccine hesitancy. Since vaccine hesitancy is complex, shaped by multiple psychological, ideological, and contextual factors, our work aims to build skills that integrate knowledge and expertise from intellectual fields outside of the traditional scope of vaccination programs and research, such as sociology, psychology, and education. This is essential if we hope to enhance and sustain public demand for vaccination and preserve the tremendous achievements of vaccination programs in sub-Saharan Africa.