Go to homepage
Revisiting the Origin Story of COVID-19
Environment

Revisiting the Origin Story of COVID-19 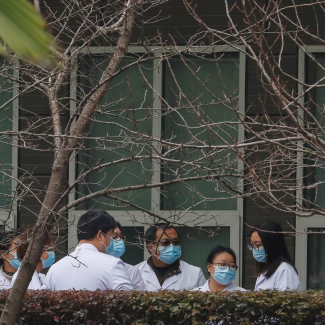 Chinese scientists at Hubei Animal Epidemic Disease Prevention and Control Center during a visit with a WHO team investigating the origins of COVID-19, in Wuhan, China, on February 2, 2021. REUTERS/Thomas Peter
by Erin M. Sorrell and Julie E. Fischer October 14, 2021

Since SARS-CoV-2 emerged and spread from China in early 2000, the origins of the pandemic have been the focus of intense speculation. Despite wildly different tones and terms, public discourse from serious inquiries to highly charged polemics has largely shared two assumptions: both natural and human-triggered disease exposures are plausible hypotheses to explain the origins of the COVID-19 pandemic, and assembling evidence that would convincingly elucidate the pandemic’s origins requires transparency and cooperation by the government of China.

If lab investigations unearth the proverbial "smoking bat," what will the implications be?

Another element of these often volatile dialogues is a lack of focus on why the question matters: if investigations unearth the proverbial “smoking bat” or unmistakable signs of a laboratory incident, what will the information mean for diplomacy, science, and public health?

After protracted negotiations with the Chinese government, the World Health Organization (WHO) sponsored a joint study team comprised of 17 Chinese and 17 international experts to seek evidence of the pandemic’s origins in early 2021. The team published an initial report exploring three possible scenarios for the emergence and spread of SARS-CoV-2: Spillover from an animal reservoir into humans, either directly from bats or via a still-unidentified intermediate host; exposure and infection of a researcher during collection of field samples; or an accident involving laboratory researchers at the Wuhan Institute of Virology (which, now famously, received funding from U.S. and other international science agencies to study SARS-like coronaviruses) or other nearby lab facility.

The WHO study team found the laboratory scenario the least likely but concluded that deeper collaboration among Chinese scientists and their international counterparts is needed to give any firm answers.

Chinese officials rejected requests for a follow-up study, demanding instead that WHO investigate allegations (propagated by China’s own state-run media) that SARS-CoV-2 emerged from a U.S. military lab. In the meantime, reputable scientists, including experts familiar with the WHO investigation, argued publicly that China had not disclosed information needed to rule out a laboratory incident as the genesis of the pandemic, adding gravitas to more partisan accusations.

In May 2021, President Biden tasked the U.S. intelligence community to redouble efforts to determine the most likely scenario. The unclassified Assessment on COVID-19 Origins released on August 27 reaffirmed that U.S. government experts remained confident that SARS-CoV-2 was not developed as a biological weapon, nor were Chinese government officials aware of the virus before the initial outbreak, but that, without additional information, they remained divided on natural exposure versus laboratory-associated incident as the likely origin of the pandemic.

Given the low likelihood that China will suddenly embrace a transparent external investigation, what can we do with what we know? Concerns that a laboratory accident could credibly account for a pandemic that has cost more than 4.8 million lives (as of October 14, 2021) and billions of dollars to date have shone a bright light on the risks of laboratory exposures. What has been less remarked upon is that measures can be taken to protect laboratory workers, their communities, and the environment from such exposures.

U.S. government experts remain confident that SARS-CoV-2 was not developed as a biological weapon

Past events provide insight into gaps that contribute to laboratory accidents. One serious economic event occurred in the UK in 2007, when an outbreak of foot-and-mouth disease (FMD) led to the culling of 570 cattle in Surrey. The outbreak was attributed to a likely discharge of waste containing the highly infectious animal virus that causes FMD from one of the laboratories at the nearby Pirbright Institute into the soil. A literal “laboratory leak” due to aging pipes and faulty drainage was attributed to facility management rather than lab personnel. Following the 2003 SARS outbreak, incidents in three Asia-Pacific laboratories led to 11 reported cases of disease. After the infection of a graduate student who unknowingly worked with a West Nile virus sample contaminated with SARS virus, WHO released new biosafety guidelines for handling SARS specimens post-outbreak to prevent laboratory accidents, secondary exposures, and community outbreaks.

Despite these events, the Chinese National Institute of Virology (NIV) in Beijing, a major hub for SARS research, reported two subsequent infections of lab workers that led to nine cases total, including health-care workers and family members. An investigation identified shortcomings in protocols and practices to inactivate SARS virus samples intended for use in general laboratory areas, leading to accidental exposures. What did these incidents share with cross-contamination and inactivation failures reported at prominent U.S. labs that did not result in infections? Sustainable systems, evidence-based protocols, and ongoing training and supervision. These are critical to laboratory biosafety—especially for people working under pressure to understand emerging disease threats, who sometimes make mistakes.

People pay the price when mistakes are made. In 1997, a young research assistant conducting behavioral research in rhesus macaques at the Yerkes Regional Primate Research Center at Emory University contracted B virus (Cercopithecine Herpesvirus 1) following a splash of fluid in her eyes—an exposure that could have been prevented through institutional practices and procedures.  Delays in diagnosis and treatment led to her unfortunate death. Her family established what has become The Elizabeth R. Griffin Program, to build awareness of biosafety, biosecurity, and the importance of safe research practices through outreach, advocacy and education.

When SARS-CoV-2 emerged and spread, diagnostic and public health laboratories across the globe went into surge mode for diagnostic testing and advanced molecular characterization. Public and private sector laboratories accelerated research and development of diagnostics, vaccines, and treatments. This surge of activity coincided with the publication of long-awaited new WHO guidance on laboratory biosafety that emphasizes an evidence-, risk-, and core competencies-based approach intended to shift biosafety practices from a “one-size-fits-all” strategy based on the pathogens under study to an assessment-driven, local adaptation of effective and sustainable risk control measures for the work being performed. This guidance arrived at a time when many laboratories are overwhelmed, either by COVID-related workloads or in scrambling to make up for work delayed by stay-at-home measures and by supply disruptions—and when technical protocols and practices are the topic of public debates.

These debates have overwhelmingly focused on whether reckless actions at one specific laboratory led to the pandemic. While continuing to seek cooperation from Chinese authorities to understand probabilities, national decision makers can use this momentum to focus on the policies, mechanisms, and sustainable financing needed to prevent unintended exposures in laboratory and research settings worldwide. The work performed in these settings is critical, from diagnostic testing to detect and respond to outbreaks to research that advances the well-being of people, animals, and the environment. Consistently integrating financing for biosafety into funding for laboratory and research systems is just the cost of doing business responsibly, rather than an add-on for specific pathogens or programs. Rolling out the new WHO risk-based guidance and integrating a more flexible, competencies- and standards-based approach to biosafety from the national to the laboratory level will require commitment from decision makers at every level.

Assessing and managing biological risks becomes more difficult where fears of liability and blame discourage transparent investigations and the sharing of information on incidents, near-misses, and biosafety hacks. Public and private sector leadership is needed to establish layered, non-punitive data collection systems that encourage laboratory and research personnel to report potentially dangerous practices or mistakes without fear of enforcement actions, building on approaches used for aviation safety. Such systems might not be perfect—and more technical research is needed to assess the best practices for diverse settings—but research and reporting together could strengthen global norms for evidence-based, continuous improvements that protect workers, their communities, and the environment from biological risks.

While the search continues for the potential origins of COVID-19, there is much we can do to prioritize prevention and preparedness efforts. Acknowledging the real demand to understand whether practices at a single laboratory facility could have created unacceptable risks, there is no need to wait for a definitive answer: we can shine the same light on gaps in lab and research safety systems worldwide, and invest in biosafety practices to reduce the risk of future spillover events.

Erin M. Sorrell is an assistant professor in the Department of Microbiology and Immunology and a member of the Center for Global Health Science and Security at Georgetown University.


Dr. Julie Fischer is the Senior Technical Advisor for Global Health at CRDF Global, where she directs the U.S. CDC portfolio. 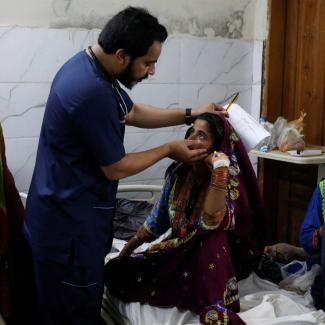