Go to homepage
The Psychological Toll of the Pandemic: What Isolation Does to the Brain
Environment

The Psychological Toll of the Pandemic: What Isolation Does to the Brain 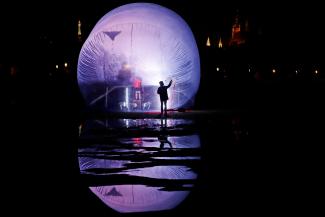 A child flies a kite during a performance of the artistic group Cirk La Putyka called "Isolation" in a park, as the spread of COVID-19 continues in Prague, Czech Republic on October 31, 2020. REUTERS/David W Cerny
by Robin Blades November 23, 2020

As the second wave of COVID-19 sends countries around the world back into lockdown, scientists worry what impact more isolation will have. More than half the world’s population was under some form of lockdown last April, and most have been subject to stay-at-home orders off and on since then. In the United States, more than ninety percent of the population was directed to shelter in place.

This worldwide increase in isolation is sure to exact a psychological toll on citizens – and will likely cause disturbing neurological changes. Prolonged lack of social connection alters the brain and makes many animals more antisocial, including humans. Americans may be particularly vulnerable, as nearly one in three live alone. Researchers are trying to understand these psychological impacts of the pandemic and develop measures for addressing them.

In the United States, more than 90 percent of the population was directed to shelter in place during the first lockdown

Neuroscientist Moriel Zelikowsky at the University of Utah has found that a neuropeptide called Tac2 coordinates the antisocial changes caused by isolation. Tac2 is produced by the emotional centers of the brain such as the amygdala, she says. Under normal circumstances, Tac2 helps moderate the fear-response in the amygdala by consolidating fear-related memories, but Zelikowsky found that in mice, chronic isolation creates a widespread Tac2 increase, leading to a persistent fear-response and greater aggression

Isolated humans show similar maladaptive behavioral alterations. A team at the University of Pisa in Italy discovered that socially isolated subjects show signs of hyper-vigilance and diminished impulse control. In a pandemic scenario, these changes may result in “intense anger towards people who don't strictly follow quarantine or rules to prevent contagion,” Andrea Poli, an adjunct professor of pathology, wrote in an email. “[It’s] a vicious circle, [because] anger increases their sense of social isolation.”

Quarantine conditions are known to increase feelings of anger, anxiety, fear, depression, frustration, and irritability. Chris Michel, a psychiatrist in California with over forty years of experience working in the field, has noticed that his patients have “a much shorter fuse” since the pandemic began, and he advises them to be “alert to an increase in symptoms.”

This increase in antisocial emotion may be contributing to reports of rising violence across the world. The European Union reported a sixty percent rise in domestic violence emergency calls after the pandemic began, and similar spikes in violence against women have been noted across Central Asia. In the United States, preliminary FBI data suggests a fifteen percent increase in murders and non-negligent homicides in the first six months of 2020. Aggravated assault also rose fourteen percent compared to last summer, according to the Council on Criminal Justice.

These psychological changes can be difficult to reverse. “There are a lot of people who, when they are socially isolated, find it harder to reach out to people than they normally would,” says Michel. The brain structures that facilitate the creation of social connections shrink during perceived social isolation. These alterations make it even harder to form bonds. Lonely individuals also have more difficulty processing social cues, tend to perceive social cues as negative, and are less able to empathize with others.

While social isolation doesn’t always lead to loneliness, these phenomena frequently overlap and lead to increased psychological distress. Michel encourages his patients to meditate, exercise, and be in contact with people – even if only online. He also recommends cognitive behavioral therapy and teaches his patients “how to pay attention to the impulse… and then not to act on it, not to lash out.” Poli also recommends self-compassion programs focused on emotional regulation to reduce the psychological impact of quarantine.

Zelikowsky is looking for biochemical pathways that might provide an even quicker solution. She has found that she can prevent the antisocial changes that isolation induces in her mice by using a drug already approved by the FDA to treat schizophrenia. “If you silence Tac2 cells, what you can do is eliminate this enhanced [fear response and] aggression that you see after social isolation,” she explained. She sees this drug as a potential treatment to prevent the adverse psychological impact of social isolation.

While no social isolation drugs are approved for humans yet, scientists like Dr. Zelikowsky hope that one day we may not have to suffer these brain changes at all. Her work may pave the way for a new type of pandemic preparedness – supplemented by a little white pill. In the meantime, as countries hunker down for the second wave, we’ll have to find our own way to weather the psychological consequences that follow.

Robin Blades is a Fulbright Scholar and clinical research coordinator in psychiatry at a California University.

The Thousand and One Natural Shocks of COVID-19

I Am an ER Doctor in New York City