Go to homepage
The Monkeypox Outbreak and Foreign Policy
Governance 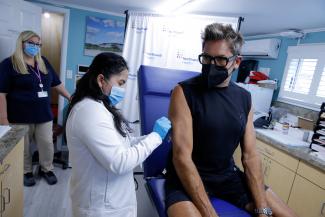 The spread of disease caused by the monkeypox virus has provoked another health crisis globally. As Jeremy Youde analyzed in his contribution to this series, the director-general of the World Health Organization (WHO) has declared the monkeypox outbreak a public health emergency of international concern. The Joe Biden administration has declared the U.S. outbreak a national public health emergency.

Before the recent outbreak, monkeypox was never a global health priority. Related to the smallpox virus, the monkeypox virus was discovered in 1958, and the WHO reported the first human case in 1970. The WHO focused on developing countries during the Cold War, and hundreds of monkeypox cases were identified in sub-Saharan Africa over the 1970s and 1980s. In 1980, after eradication of smallpox, the World Health Assembly (WHA)—the WHO's highest policymaking body—supported monkeypox surveillance by the WHO.

Even so, the WHO, its regional office for Africa (AFRO), and WHO member states prioritized other diseases (for example, malaria and HIV/AIDS) and health challenges (for example, access to primary health care). My efforts to find a WHA resolution from 1959 through 2021 focusing on and elevating monkeypox as a threat—as the assembly has done for many diseases and health issues—yielded no results.

After the Cold War, multilateral, bilateral, and multi-stakeholder global health initiatives have spent billions on health assistance in sub-Saharan Africa. This region was prominent in heightened U.S. global health engagement, especially through the President's Emergency Plan for AIDS Relief, the President's Malaria Initiative, and U.S. participation in the Global Fund to Fight AIDS, Tuberculosis, and Malaria. In this unprecedented collective action on health that involved Africa, monkeypox was not a priority.

AFRO surveillance has continued to record monkeypox cases, but AFRO does not appear to have elevated the disease in policy terms. Neither the 2018 nor the 2019 final reports of the annual AFRO general session mentioned the serious outbreak in Nigeria from 2017 to 2018—the first time monkeypox had appeared in Nigeria in thirty-nine years. On July 14, 2022, AFRO stated that, in 2020, the region "reported its highest monthly cases of monkeypox" to date. But the final reports of the AFRO general sessions in 2020 and 2021 do not discuss this spike or address monkeypox directly. On May 25, 2022, several African governments, the Africa Centres for Disease Control and Prevention, the WHO, various UN agencies, and nongovernmental stakeholders issued a Call to Action: Addressing Humanitarian Health Challenges in Africa in a Rapidly Changing World that does not mention monkeypox among its priorities. On August 9, 2022, AFRO's website did not list monkeypox under "Health Topics."

Before 2022, global health stakeholders appear to have had a shared perspective on monkeypox that was sustained for decades. The WHO, AFRO, and WHO member states prioritized other problems that were more dangerous and urgent than monkeypox. Compared to other diseases, the health, economic, and political costs of monkeypox did not stimulate the foreign policy concerns of the United States or other countries, even with increased foreign policy interest in global health in the post-Cold War era.

The spread of monkeypox outside Africa through human-to-human transmission primarily among men who have sex with men—with epicenters in high-income countries—has epidemiologically and politically transformed the disease. The mobilization of resources against monkeypox in affected high-income countries and beyond is unprecedented in the history of the disease. The outbreak has created scientific questions about the virus, public health challenges, and controversies concerning testing, contact tracing, access to therapeutics and vaccines, and public health communication.

The national and international public health and political pivots on monkeypox affect foreign policy because governments are engaging in collective action on it. However, the current prominence of monkeypox does not mean that foreign policy interests in monkeypox or global health will fundamentally change. Absent some mutation that makes the monkeypox virus more lethal, debilitating, and transmissible, the spread of the disease in the United States and other countries poses no threat to foreign policy interests in national security, economic power, development strategies, or humanitarian activities. The outbreak also does not mean the United States will transform its global health programs in Africa to focus on monkeypox.

Monkeypox went global in the shadow of COVID-19. This pandemic has killed over one million Americans and more than six million globally. It threatened national security, mauled the U.S. economy, hurt American global health investments in low-income countries, and damaged the credibility of the United States and its democracy. The foreign policy challenges emerging from COVID-19 are far more important to U.S. national interests than the monkeypox outbreak. But foreign policy attention on COVID-19 and preparing for future pandemics is waning, an ill omen for any notion that monkeypox will shape U.S. foreign policy.

The monkeypox outbreak is not over. The United States is focusing on controlling the disease domestically, a challenge that underscores how unprepared the United States is to respond to epidemic threats at home. Across almost every issue, recommendations on improving U.S. foreign policy propose that the United States rebuild domestic institutions and capabilities as a strategic priority. This is also true for public health, as COVID-19 painfully taught—a lesson that monkeypox reinforces.

The scale and the expense of domestic rebuilding will, if taken seriously, constrain what the United States does globally. But it might not be taken seriously. Congress is refusing to appropriate more domestic and international funding for COVID-19—a disease that still causes hundreds of deaths and tens of thousands of hospitalizations per day in the United States. In the ruthless domestic and foreign policy triage on public and global health, monkeypox will not compete well.

The monkeypox outbreak is also unlikely to affect U.S. foreign policy on pandemic governance reform. After the COVID-19 catastrophe, the United States already has strategic interests in such reform. Among other things, the Biden administration has proposed revisions to the International Health Regulations, agreed to negotiate a pandemic treaty, helped establish a pandemic financial intermediary facility at the World Bank, and has supported improvements in global surveillance. Monkeypox might reinforce why the United States supports pandemic governance reform, but it is no game-changing development. Pandemic governance reforms are also works in progress and offer no immediate help for responses against monkeypox.

The concentration of monkeypox cases among men who have sex with men has raised fears that the discrimination LGBTQ+ persons initially experienced, and continue to encounter, with HIV/AIDS could intensify and expand. Whether the United States can lead on the human rights issues associated with the monkeypox outbreak is subject to doubt.

President Biden has argued that, on human rights, the United States "leads the world not only by the example of our power, but the power of our example." However, neither U.S. power nor the American example has a good track record of late.

For reasons unrelated to U.S. foreign policy, efforts against monkeypox face a more auspicious outlook than what transpired after COVID-19 emerged. To date in nonendemic countries, the disease is linked with four deaths, mild symptoms in most cases, low hospitalization rates, and heightened awareness in communities where its spread has been concentrated. This awareness includes general acceptance of testing, vaccines, therapeutics, and the need for behavior change. Politically divisive measures—such as economic lockdowns, population-scale social distancing, mask and vaccine mandates, and travel restrictions—are not necessary. Vaccine scarcity will probably ebb faster than it did with COVID-19. More effective non-pharmaceutical interventions in affected countries and increased vaccine production could even make it possible for African countries where monkeypox is endemic to mount vaccination campaigns.

Put differently, countering the world's first serious disease event since COVID-19 perhaps does not depend on what happens with U.S. foreign policy on global health. In the present circumstances, that’s probably a good thing.