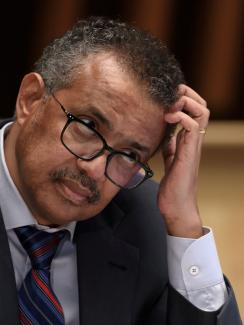 WHO Director-General Tedros Adhanom Ghebreyesus attends a news conference at the WHO headquarters in Geneva, Switzerland, on July 3, 2020. Fabrice Coffrini/Pool via REUTERS
by Jeremy Youde August 10, 2022

If you want to understand the ongoing existential crisis of the World Health Organization (WHO), look no further than how it has mishandled the global monkeypox outbreak.

At a time when the COVID-19 pandemic has challenged the WHO's mandate "to act as the directing and coordinating authority on international health work," the unprecedented monkeypox outbreak presented the organization with a chance to prove its value to the global community. Instead, through its cautious approach and hesitancy, the WHO contributed to the conditions that facilitated the disease's continued spread. As a result, the WHO faces more questions about where it fits into the COVID-battered landscape of global health governance.

Before cases started appearing across Europe in May, most people beyond certain regions in Africa knew little to nothing about monkeypox. Monkeypox is an orthopoxvirus related to smallpox. It is a viral zoonotic disease that spreads from person to person through close contact. Symptoms generally appear five to twenty-one days after exposure and can include fever, headache, swollen lymph nodes, rash, and lesions. Though it is rarely fatal, it can take two to four weeks to recover. Prior to this outbreak, most cases appeared in West and Central Africa.

Through its cautious approach and hesitancy, the WHO contributed to the conditions that facilitated monkeypox spread

Though the number of monkeypox cases in Africa has been increasing in recent years the disease received little global attention before it appeared in the United Kingdom. Cases of monkeypox were rare in Europe, and the spread of the disease among men who have sex with men and through the movement of people across international borders was also unusual.

The unexpected global spread of an infectious disease through unusual means is exactly when the WHO should lead a response because such outbreaks require international cooperation to address effectively. Orchestrating collective action is core to the WHO’s mission, and the organization has a unique tool to generate early international action against the spread of an infectious disease.

A PHEIC declaration does not provide resources or mandate that countries act, but it tells the world that an outbreak is serious and requires collaboration. A PHEIC declaration is the WHO's Bat-Signal, letting countries know they should work together to confront a serious disease event. By the end of 2021, the WHO had declared PHEICs for pandemic influenza H1N1 (2009), polio (2014), Ebola (2014, 2019), Zika (2016), and COVID-19 (2020).

On July 23, WHO Director-General Dr. Tedros Adhanom Ghebreyesus declared monkeypox a PHEIC. This decision came nearly a month after Tedros declined to make such a declaration in late June, when more than 3500 cases had occurred in 59 countries where the disease was not typically seen. At both its June and July meetings, the Emergency Committee could not reach consensus about whether the outbreak should be declared a PHEIC.

Between the Emergency Committee meetings, the virus continued to spread rapidly, increasing to nearly 18,000 cases in 69 countries where the disease is not endemic. The delay in declaring a PHEIC raised fears that the international community had missed its window to contain the outbreak. The delay also provoked questions about why Director-General Tedros declared a PHEIC without Emergency Committee consensus in late July but was unwilling to do so in late June. The delayed PHEIC declaration is better than no declaration, but, while the WHO prevaricated, monkeypox cases increased by more than 400 percent in one month.

Waiting for the PHEIC

In the past, the WHO has faced criticism for being too slow to declare PHEICs. The Ebola outbreak in West Africa in 2014 was the first-recorded transnational Ebola epidemic, but the WHO did not declare a PHEIC until nearly five months after the first cases were reported and more than 900 people had already died in. Similarly, the WHO waited until January 30, 2020, to declare COVID-19 a PHEIC after the Emergency Committee recommended against a declaration on January 23 because the outbreak had "not yet become a global health emergency."

The WHO has defended its cautious approach to declaring PHEICs as necessary. If the director-general declares every infectious disease that spreads across borders a PHEIC, then the designation will lose meaning. A PHEIC declaration should be made for only the most pressing disease threats.

The WHO lacks the financial, legal, and human resources necessary to put a PHEIC declaration into action

Being judicious about declaring PHEICs is important, but the WHO’s internal review after the slow response to Ebola in West Africa recommended changes to allow the WHO to make more timely PHEIC declarations. Furthermore, while Emergency Committee members expressed concern that a PHEIC declaration on monkeypox could stigmatize men who have sex with men, the outbreak spread more after the decision not to declare the outbreak a PHEIC, increasing the likelihood of stigmatization.

To Declare or Not to Declare, Should That Be the Question?

This pattern of delayed PHEIC declarations raises larger issues about where the WHO fits into the global health governance landscape and what sort of authority and legitimacy the organization has. But the pattern also requires member states to grapple with what role they want the WHO to play.

The delay in declaring a PHEIC for monkeypox reflects the WHO's larger existential problems. The delay created a vacuum that endangered global health. Waiting a month to reassess monkeypox gave the virus additional time to infect more people, potentially mutate, and make it harder and more expensive to control. The pattern of delay also creates the possibility that states will adopt different approaches, potentially including trade and travel restrictions, and create a confusing hodgepodge of policies. In this context, the WHO loses its leadership role and wastes its authority.

As has been proposed, WHO member states can empower the WHO to issue different types of warnings about outbreaks—but creating some sort of alert scale only makes sense if clarity exists about what the different levels mean. Otherwise, it runs the risk of muddling an already confusing situation in moments where clarity and consensus are needed.

The conservative approach to PHEICs also undermines the WHO's case for more authority and resources. The WHO lacks the financial, legal, and human resources necessary to put a PHEIC declaration into action. By waiting to declare a PHEIC, the WHO and its member states will require even more resources to stop an outbreak, leading to accusations that the WHO's hesitation allowed the disease to get out of hand. A vicious cycle emerges—member states are less willing to increase their support for the WHO, which makes the organization weaker, which compromises the WHO's response capabilities, and so on.

The need for a global body that can coordinate international responses to health threats has never been greater. But the WHO's actions often undercut the argument for granting the WHO more resources and authority. If WHO member states want a stronger, more responsive WHO, then they should empower it politically and financially.

Jeremy Youde is the dean of the College of Arts, Humanities, and Social Sciences at the University of Minnesota—Duluth and is an internationally recognized expert on global health politics.