Go to homepage
How the U.S. COVID-19 Response Lost the Plot After Omicron
Governance 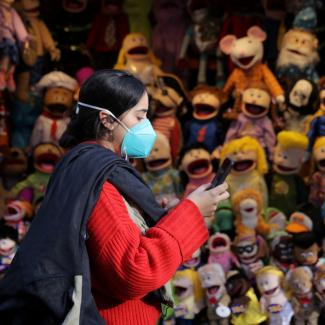 Many novels and movies about deadly disease outbreaks tell a similar story: as the virus spreads and death toll rises, doctors and nurses panic and walk off the job, health-care systems near collapse, and society teeters until scientists succeed in discovering a cure or vaccine, which people then line up gratefully to receive.

But, for most of the COVID-19 pandemic in the United States, that plot has been reversed.

Despite long hours and impossible circumstances, the majority of U.S. nurses and physicians kept working; the American health-care system, rightly maligned for its expense and many inequities, performed well, especially given the hand it was dealt. When one does an apples-to-apples country comparison that accounts for age and obesity level, the U.S. infection fatality ratio—the number of COVID-19 deaths per infection—was lower than twenty-one of its thirty-one wealthy nation peers between January 1, 2020, and September 30, 2021.

During this pre-omicron period in the pandemic, the story for the United States was largely a failure of prevention—the inability of the U.S. government to persuade many Americans to adopt the necessary public health measures, including vaccination, to keep the virus from spreading. The United States experienced an extraordinarily high number of SARS-CoV-2 infections relative to other high-income nations in the first twenty months of the pandemic, according to peer-reviewed estimates in the Lancet. The disparity holds true even when adjusted for country factors beyond policymakers’ control such as population density, gross domestic product (GDP), altitude, or estimated previous exposure to beta variant coronaviruses.

According to these estimates, the United States experienced an infection rate that is 45 percent higher than the next highest high-income nations. With so many infections, even a relatively low fatality rate could not keep Americans from paying a terrible price in the pandemic—699,844 COVID-19 deaths between January 1, 2020, and September 30, 2021.

The emergence of the omicron variant in November 2021, however, changed the story of why the U.S. COVID-19 response is struggling relative to its peers.

Though omicron is not more virulent than previous variants, it is significantly more transmissible, even among people who have been fully vaccinated. This has resulted in many more SARS-CoV-2 infections globally, including in wealthy nations with high vaccination coverage. The United States still has the highest adjusted infection rates, although importantly, it is no longer such an outlier among wealthy nations as it once was.

In contrast, the U.S. performance relative to its high-income country peers on infection fatality rate deteriorated during the omicron wave. Hospitalizations reached record highs, with 83 percent of ICU beds across the country in use at the peak of the omicron wave. Millions of Americans fell sick, and over 250,000 died—elderly Americans were hit especially hard. Meanwhile, nations such as Andorra, Argentina, and Uruguay, which had lagged far behind the United States on pre-omicron COVID-19 fatality rates, are now doing better.

In simple terms, the United States went from being relatively good at treating COVID-19 cases resulting from the pre-omicron variants to being relatively bad at it during the omicron wave. What explains this shift? Because it is highly transmissible, omicron is more likely than previous variants to spread among unvaccinated and vulnerable populations quickly. This had serious implications for unvaccinated, elderly, and immunocompromised populations, as exemplified by Hong Kong’s experience in spring 2022. Hong Kong had formerly been a zero-COVID city, but with low vaccination rates among the elderly, 284 people were dying each day, on average, in Hong Kong between March 6 and 13. That’s a death rate of 38 per million people per day—the highest recorded globally in the pandemic.

Seniors in the United States were vulnerable, too. As of May 2022, the share of fully vaccinated Americans had stagnated at 66 percent—the lowest among higher-income countries—and just a third of Americans were boosted. More than 30 percent of those aged 75 years or older (about 23.2 million people) had not yet received booster shots, despite CDC recommendations for this age group—the demographic most vulnerable to severe illness and death from COVID-19.

Proportion of Population Vaccinated with a Booster

In contrast to the United States, greater booster adoption in Chile and Uruguay has been associated with lower rates of deaths per infection during the omicron wave. For both countries, this may have been the result of widespread uptake of mRNA boosters. In 2021, Chile and Uruguay relied heavily on Chinese vaccines, which proved to be insufficient against global and regional variants. Before the arrival of omicron and before the rollout of boosters in Europe, East Asia, and North America, they announced near-universal booster programs, where anyone who was immunocompromised or vaccinated with Chinese doses was eligible to receive a booster shot of Pfizer. While doing so did not erase their risk—as evidenced by Chile still facing one of the highest infection fatality rates during the omicron wave—it may have helped significantly.

As the United States continues battling COVID-19 and begins preparing for potential future health threats, it would do well to remember the lessons from this current pandemic. Science and the heroism of U.S. health workers can only defeat this pandemic if policymakers and the public are also doing their part. The biggest obstacles in the road to collective safety are not scientific; COVID-19 has shown us they are political, economic, and social. Then we can go back to watching pandemic thrillers on the big screen, not living them.


Haley Lescinsky, MPH, is a researcher at the University of Washington’s Institute for Health Metrics and Evaluation (IHME).


Joseph L. Dieleman is an associate professor at the Institute for Health Metrics and Evaluation (IHME) at the University of Washington.