Go to homepage
Four Failures and an Invasion
Governance

Four Failures and an Invasion 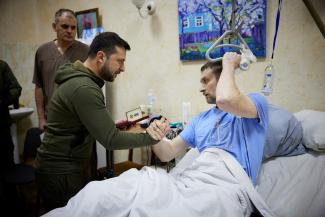 The toxic context created by great power rivalry and nationalism within countries has been blamed for the failure of international cooperation during the COVID-19 pandemic. Indeed, governments pointed fingers at each other, implemented nationalistic policies, and paralyzed collective action. Under this perspective, the COVID-19 tragedy was a symptom rather than the source of the inadequate collective action mounted against the pandemic.

But media coverage of actions taken by the United States, its NATO allies, like-minded democracies, and other countries against Russia's invasion of Ukraine often depicts a resolute, unified response. The actions have surprised and hurt Russia economically and diplomatically. As Michael Gerson argues, the "response to the unprovoked Russian invasion of Ukraine has been shockingly effective."

Why, then, were the United States, the democratic West, and the international community dysfunctional concerning the COVID-19 pandemic but not during the initial weeks after the invasion of Ukraine? The same query can be asked when comparing the response to the invasion with the collective-action failures on another transnational threat to global health—climate change. Such comparisons raise questions about the incentives, capabilities, and commitments that democracies and other countries possess to counter transnational threats compared to those they have to confront the traditional, age-old threats of war and military power.

In pondering such questions, the collective action against Russia should not be exaggerated. The center of gravity for responses is the transatlantic community of democracies. Some democracies—such as India, Brazil, and South Africa—have not joined the anti-invasion coalition. Authoritarian countries, most prominently China, are not punishing Russia. Multilateral institutions are not playing leading roles. Although the UN General Assembly condemned the invasion, the Russian veto in the Security Council prevents the UN's most powerful organ from acting against this threat to international peace and security.

In addition, the war in Ukraine is less than a month old, making it difficult to predict whether early responses will prove effective over time. "Wars," Winston Churchill warned the British people after Dunkirk, "are not won by evacuations." The countermeasures imposed after the invasion will not look impressive if a dictatorship destroys a democracy in the heart of Europe.

Even with caveats, exploring why the transatlantic community of democracies has responded with resolve and unity to the invasion but has failed concerning COVID-19 and climate change remains important. The role of the democratic West in these failures on transnational problems is hard to exaggerate. High-income countries in North America and Europe are among the biggest historic emitters of greenhouse gases and remain large sources of emissions. These countries have also prevaricated as the climate adaptation crisis became a clear and present danger. The same democracies became leaders in global health after the Cold War ended in the early 1990s. However, this engagement did not prepare them for COVID-19 or ensure that international cooperation against the pandemic would be robust.

The same community of democracies has experienced policy failure on other transnational problems—particularly terrorism and cyberspace governance—in which it was invested. The post-9/11 war on terrorism did not bring liberal democracy to Iraq or the Middle East, stabilize Afghanistan, or prevent new terrorist threats (for example, the Islamic State). Post-invasion warnings about Russian cyberattacks and disinformation campaigns highlight how dangerous cyberspace has become since the days when internet freedom and multi-stakeholder governance were ascendant.

The failure of the democratic West on these four transnational problems is disconcerting. The failure unfolded during the post-Cold War period when the transatlantic community of democracies did not face serious balance-of-power and ideological competition. In the absence of geopolitical rivals, the United States and other democracies framed terrorism, pandemics, malicious cyber activity, and climate change as non-traditional threats to national and international security. In challenging the dominance of the democratic West over the last twenty years, China and Russia did not prioritize fighting global terrorism, achieving global health security, defending a free and open internet, or mitigating climate change.

The breakdown of cooperation during COVID-19 forms part of a pattern of failure on transnational problems by the democratic West that began before geopolitics returned to the international system. This pattern developed despite the securitization of these problems by democratic governments and disinterest in these challenges by emerging rivals. As the collapse of Afghanistan underscored, the war on terrorism did not end well. The democratic West did not prepare for a pandemic that it warned was inevitable. It struggles to defend against the global rise of cyberattacks, online disinformation, and digital repression. It continues inadequate policies on climate change.

In response to the Ukraine war, the transatlantic community of democracies tapped diplomatic, economic, and military capabilities built over decades

The invasion of Ukraine is not a transnational problem. It triggered a war between two states that threatens national security outside the theater of conflict and disrupts the global balance of power. Likewise, the responses of the states in the anti-invasion coalition have prioritized the exercise of material power by providing weaponry, deploying military forces, imposing economic sanctions, and exploiting intelligence assets. These actions seek to compel Russia to leave Ukraine, damage Russia's power, and deter further Russian aggression.

The sense that the United States and its allies have mounted an impressive response suggests that the actions are rooted in a shared conception of security, potent capabilities, and political solidarity. Governments have no trouble understanding the threat to national security and the need for collective defense created by a military attack by another state, especially one with great power ambitions. This clarity contrasts with weaker, contested claims that transnational problems, such as pandemics and climate change, are national security threats. Further, the pandemic has exposed how democracies do not think in terms of common defense or collective security when pathogens threaten their populations, economies, and power.

In responding to the invasion, the transatlantic community of democracies tapped diplomatic, economic, and military capabilities built over decades to protect shared political, economic, and security interests. NATO, the Group of 7, and the European Union provided platforms to project military power, share intelligence information, coordinate economic countermeasures, and facilitate common diplomatic strategies. These capabilities have proved meaningful in enabling collective action against Russia. Yet, the pandemic and climate change crises demonstrate that no equivalent capabilities have been built in the democratic West or elsewhere to respond to global health threats.

The shared sense of security and the use of collective-action capabilities express a political solidarity in the democratic West over the invasion. This solidarity extends beyond the threat of Russian aggression and reflects awareness that the invasion marks a turning point for national security, European stability and prosperity, the balance of power, and global prospects for democracy.

Before the invasion, efforts on the four transnational problems analyzed above did not reflect or develop such solidarity. Global health officials lament the lack of solidarity among countries during COVID-19. The democratic West never developed political solidarity on climate change despite its role in causing the problem and the health threats that climate change poses.

In time, the transatlantic community of democracies might roll back the Russian invasion and contain its aftermath. However, these outcomes are unlikely to produce positive spillover for efforts against transnational threats to global health. Even when free of geopolitical dangers, countries have not demonstrated they can manage such threats when they lack a shared sense of security, collective-action capabilities, and political solidarity on global health.